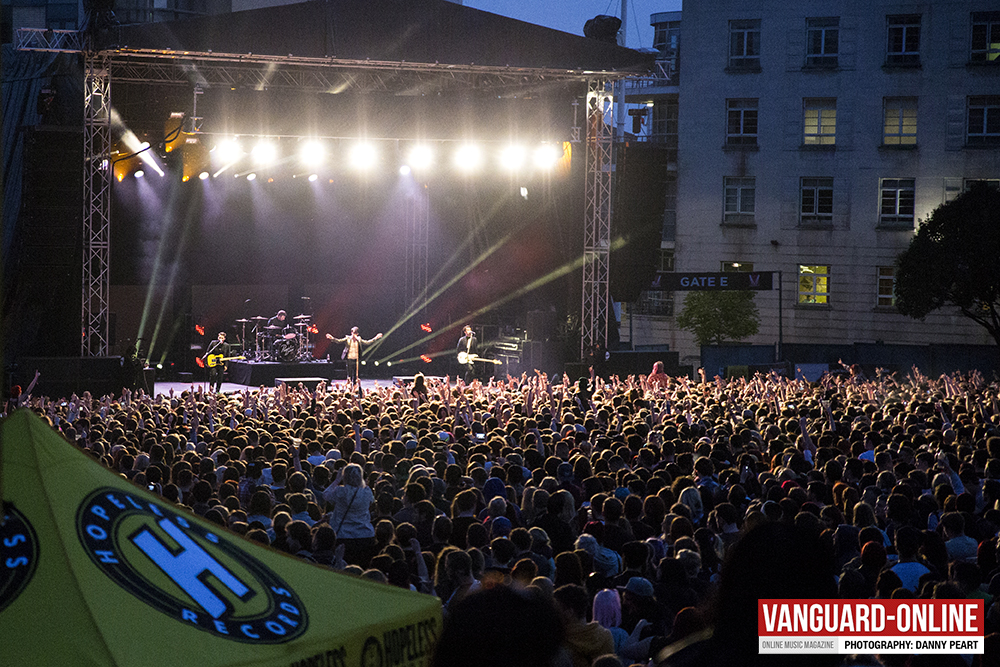 Slam Dunk Festival weekend was upon us and promised to be an incredible marking of the 10th anniversary of the festival. When you have a superstar like Brendon Urie performing with Panic! At the disco, you know it’s going to be a memorable event.

A moment has to be taken to consider the rich history of Slam Dunk with previous performances from bands such as Fall Out Boy, You Me at Six and Paramore. An incredible achievement: from humble beginnings at Leeds Uni and one stage to adding a Midlands and Southern leg to the event. 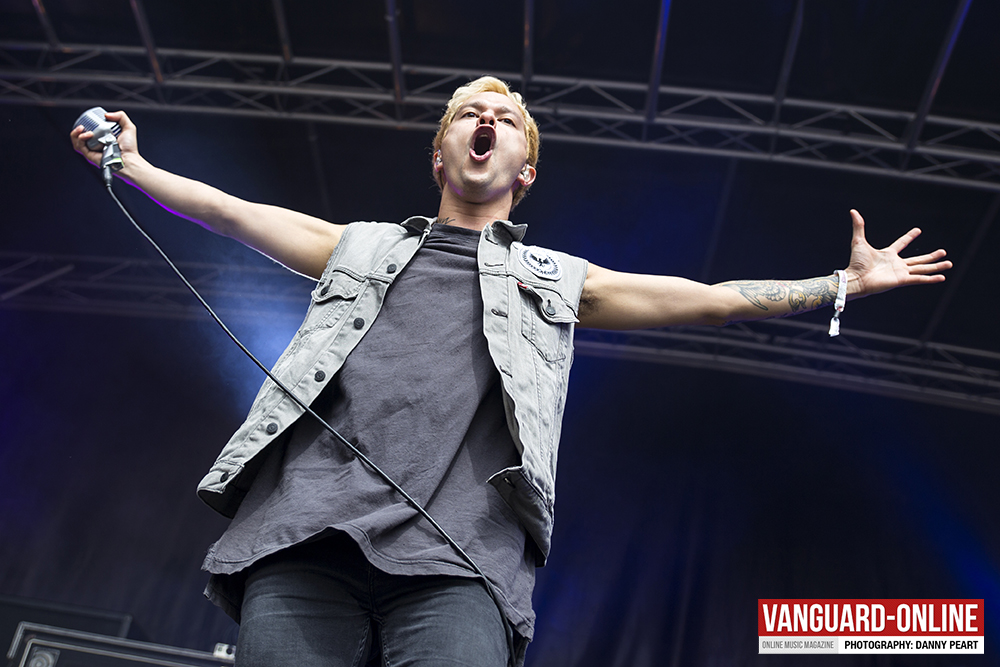 Kicking off the festival on the Atlas stage in the blistering sun was Coldrain (7) who looked to only shower the crowd with their metal riffs and contagious energy. It undoubtedly worked as only a song into their set people were flooding down the street to see who was tearing up the Atlas stage so early. A short but sweet set, but with the likes of ‘The War Is On’ and ‘Gone’ it was enough to wake everyone up and get them on their feet ready for a day of live music and festival antics. 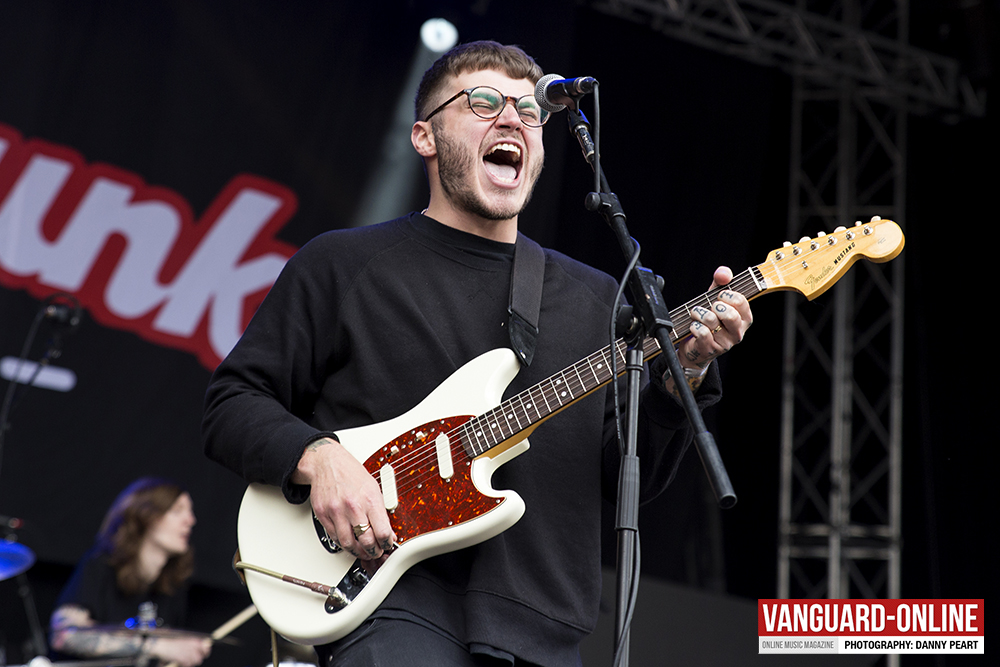 Moose Blood (7) opened the show to a raucous and packed out crowd. They put on a fine show exhibiting tunes like ‘Honey’ and ‘I Hope You’re Miserable’. The crowd were more than into it when a surge of movement pushed the crowd to the barriers like a kind of seal of approval. Something to note was the appreciation of the turnout from front man Eddy Brewerton. It’s always refreshing to see a band be grateful for these kinds of moments. The guys from Kent set the bar high on the main stage nice and early. 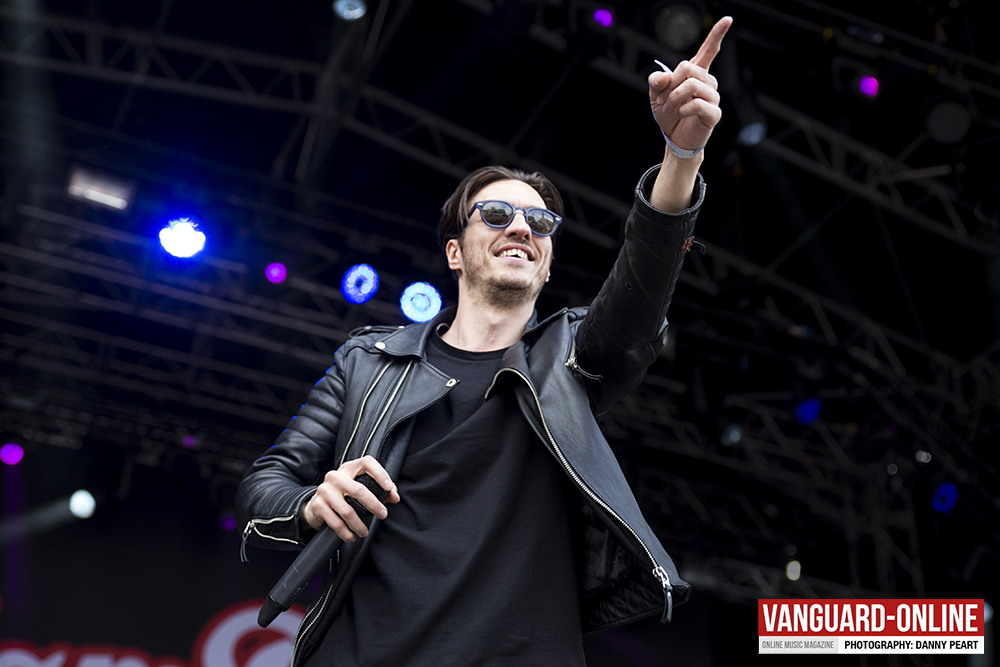 Young Guns (7) were the second band to grace the stage after their apparent disappearance. The big news in the Young Guns camp was the exit of tireless drummer Ben Joliffe that signals the start of a new chapter for Young Guns moving forward with session drummer Chris Kamrada, (credits on PVRIS and There For Tomorrow records) when they play Vans Warped Tour this summer. Kamrada has played drums for the new YG record to be released later this year. However, they had Josh Coombes (Tigress) fill in. It must be said, there was a small void that Ben’s energy and physicality used to fill that was noticeable on stage. Frontman Gustav managed to keep spirits high with a dominant performance. His stage presence is some of the best in the business right now. With an infectious smile and meaty vocals we were taken through a whistle stop tour of Young Guns hits and were treated to a brand new song potentially titled ‘Bulletproof’. The sound didn’t seem a huge far cry from previous records but a noticeable development in sound. A brilliant set with lots to think about in terms of Young Guns future. 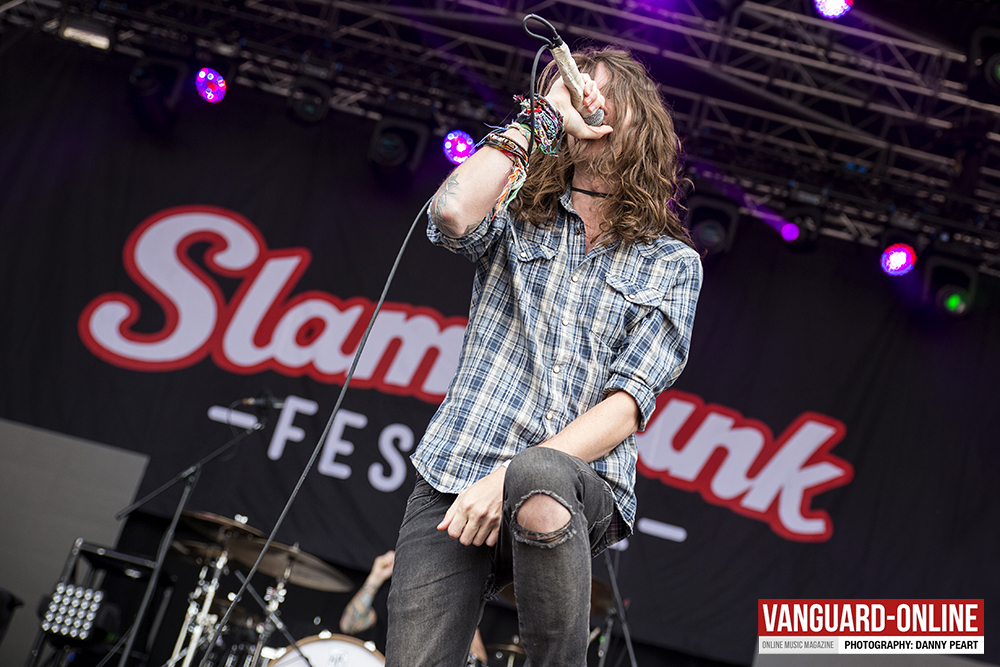 Mayday Parade (7), fronted by bare footed Derek Sanders, made the journey from across the pond to delight a bursting crowd. It’s no surprise to see a turn out so large for the Florida favourites after their fantastic headliner earlier this year just down the road, keeping Mayday Parade in the forefront of peoples minds going into the festival. They joyfully worked their way through hits including ‘Three Cheers for Five Years’ and ‘When You See My Friends’ with plenty of energy, and needed to give little motivation to the sea of onlookers to have them participating throughout. A pretty faultless set for a faultless crowd. Spirits were high and never wavered during a veteran standard set. 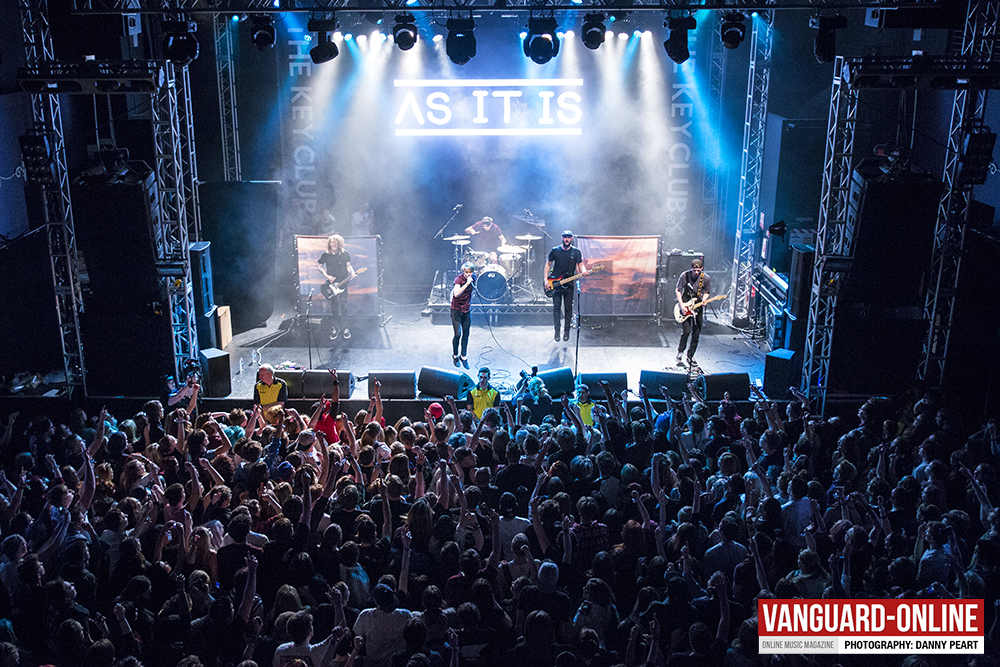 Moving over briefly to the O2 at the Key Club stage were As It Is (8). Brilliantly, they walked out to ‘Hollaback Girl’. I’ve never been more hyped for a band purely because of the entrance song. Within the O2 the setting was a lot more intimate than the open-aired main stage. Lead singer, Patty Walters had endless energy and put on quite the show. Noticeably there were a few people awaiting Real Friends and Four Year Strong who wasn’t too familiar with As It Is, but they were easily taken in by a solid and energetic performance. It was a thoroughly enjoyable show with a faithful and willing crowd. 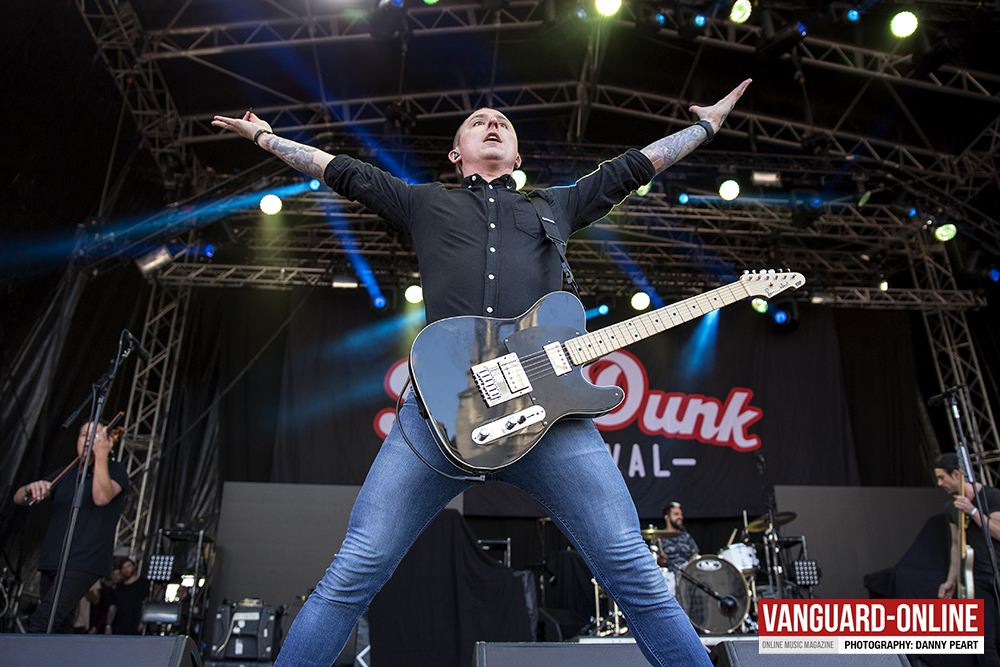 It’s difficult to say too much about Yellowcard (7.5), it would be unfair to make any kind of judgement on a set that was heavily marred by technical difficulties. A confused and increasingly anxious crowd waited to hear the 2003 album ‘Ocean Avenue’ from start to finish. However, due to the aforementioned technical difficulties Yellowcard were forced to play a ‘best of’ the album. Credit where it’s due, they still smashed it. Although the anticipation of the crowd made for an air of annoyance, there was a patience that has to be respected. The crowd remained packed and were treated to an, albeit shorter, incredible set. 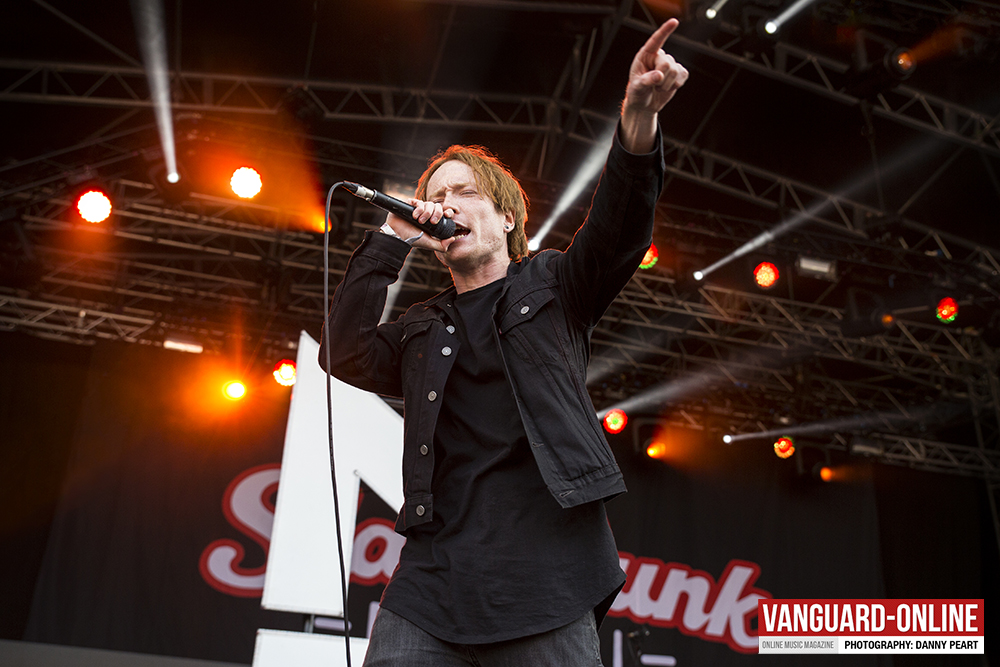 Following Yellowcard was another return from hiatus with Mallory Knox (8). The Cambridge based gents, who have recently toured Europe with Sleeping With Sirens, return to the UK and to Leeds on their hat-trick performance at Slam Dunk. Testament to their progression over the recent years with most recent album ‘Asymmetry’ reaching number 16 in the UK album charts, the crowd was the most raucous I’d seen it all day. Belting through MK hits like ‘Shout at the Moon’ and ‘Ghost in the Mirror’, I couldn’t help but smile seeing bassist Sam Douglas’s significant other letting anyone know who would listen that it was her man up there. The pride exuded from her and was infectious. Moments like that instrumental (pun intended) in an authentic experience at a festival like Slam Dunk because you end up feeling connected to the band in a way you hadn’t before. In the unexpected May sun frontman Mikey Chapman proved again he’s one of the best (and potentially most underrated) vocalists in rock music. Towards the end of an hour long set that flew by the sun had begun to work its way behind the Leeds skyline and we were taken into the evening with ‘Lighthouse’. This song was belted in chorus by the Leeds faithful and was a passionate end to brilliant set. 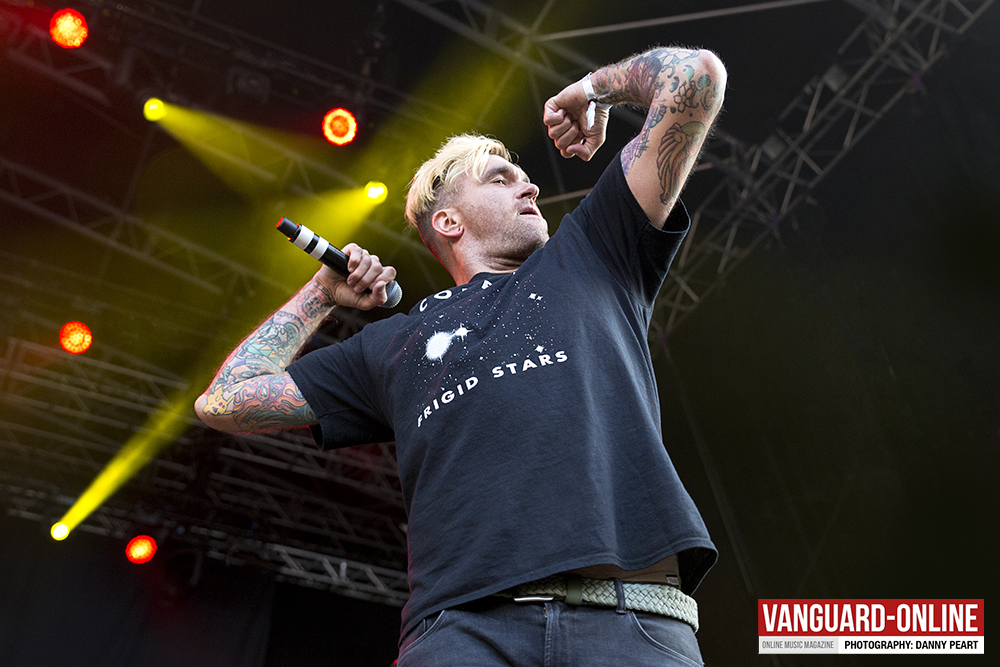 New Found Glory (9), the band the bands wanted to see. A countdown brings the vibe to a yearning buzz that spreads through Slam Dunk North, waiting for them to come and remind the slightly older contingency of their youth. Formed in 1997, the band are into their 19th year that essentially pioneered the second wave of pop punk along with Blink 182 remain as exciting as ever. With tunes like ‘Understatement’, ‘Hit Or Miss’ and ‘Dressed to Kill’, Leeds was alive with Pop Punk. Front man Jordan Pundik gave a resonating speech and told the crowd that “Pop Punk is about not fitting in, that’s what we write music about. Look around you. You’re all here together for Pop Punk!” he then did the obligatory affirmation that Leeds does the best festivals. Correct Jordan. We do. Towards the end of the set some incredibly lucky fans were given a moment to remember when they were plucked from the crowd to sing along on stage. For a brief moment when the first chorus to ‘Vicious Love’ came on I thought we might have a special appearance from Hayley Williams, who featured in the re-release of the track last year. Unfortunately not, but I won’t pout about that for too long. Closing the set with ‘My Friends Over You’ left a sweet taste in the mouth of the ageing crowd. Veterans of the game, and the perfect summary of Slam Dunk Festival in an explosive pop punk set to celebrate the 10th anniversary. 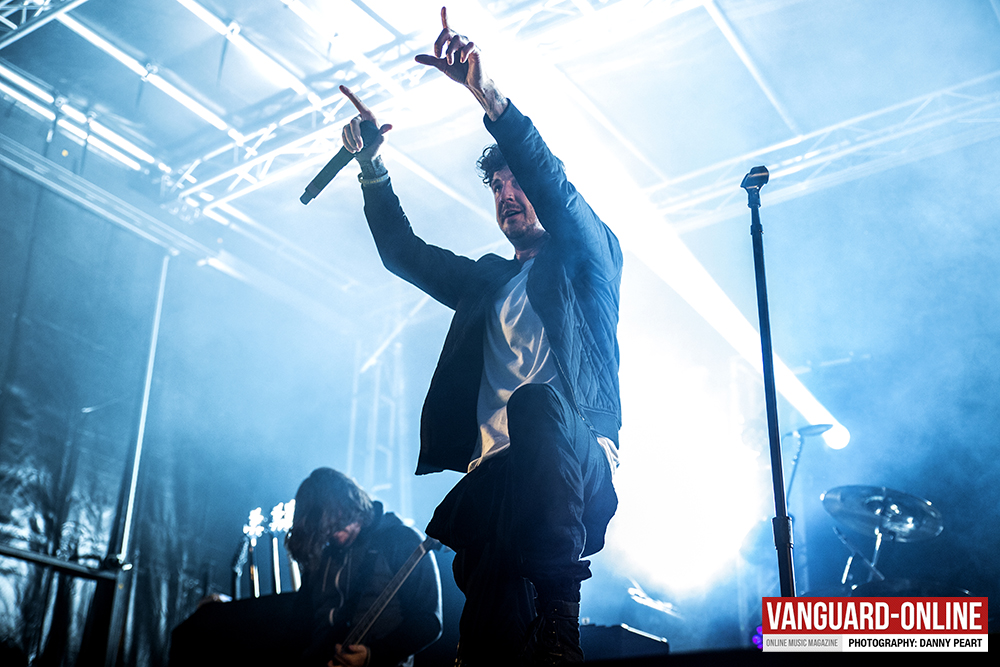 It’s been a tough year or so for Of Mice & Men frontman Austin Carlile, having spent a good portion of 2015 tackling multiple surgeries to alleviate his battle with Marfan Syndrome, and then recently undergoing major hip surgery earlier this year. So it’s rather warming to see him lead out Of Mice & Men (8) to headline the Atlas stage with a massive grin on his face. He’s confronted with a packed street full of screaming fans, and you can literally see the adrenalin rush through him straight from kick off.

We’re treated to little over an hour of fiery metal with earth shattering riffs and screaming vocals from the California lads. Even a fair few blasts of Co2 cannons could only just make the set a little more explosive than it already was. They even had the crowd crouched on the floor before jumping to their feet to the heavy riff of ‘The Depths’ which turned the street into anarchy with mosh pits and crowd surfers for one of the highlights of the night. A fitting way to close the Atlas Stage with a solid performance from Austin and co. which leaves everyone in a sweaty mess seeking out a well deserved pint. 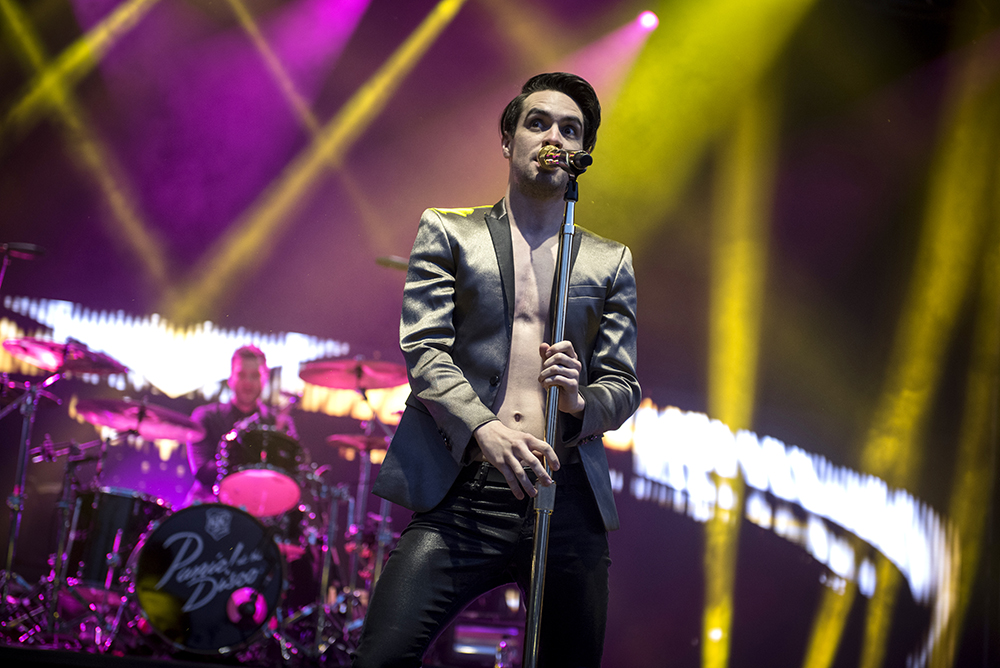 Panic! At The Disco (10). What can I really say to do justice to this performance? Having never seen them live before I didn’t know what to expect but I was completely and utterly blown away. Ignoring the screams of teenage girls (and my own) for a shirtless Brendon Urie, I couldn’t help but be mesmorised by his vocal ability. His 4 octave range, dynamics and tone were something to behold, even treating us to a demonstration that men can achieve whistle-tone too.

Opening with ‘Don’t Threaten Me with a Good Time’ and blasting through their back catalogue of pop/punk/emo rock we were treated to a journey of Panic! through the years. Having a superstar like Brendon Urie at the festival made the whole thing feel bigger. Like a true spectacle. It’s difficult to truly put into words what the atmosphere felt like in Leeds that night though: enigmatic, breath-taking, jaw-dropping and masterful come to mind.
Towards the end of the set we were treated to a cover of Queen’s ‘Bohemian Rhapsody’ that is difficult to get right for any band. It has to be said, they nailed it. It was mind blowing with a huge production to boot. To a point it didn’t feel like a cover with how at home Urie seemed during the performance. To finish they played “the song that made all this possible”, ‘I Write Sins Not Tragedies’ which was met with every voice in the crowd singing each and every word like they had been waiting to their whole lives. Panic! then brought back something they haven’t done for in a while which seemed like another opportunity for Urie to demonstrate his insane vocal abilities with ‘Positive Hardcore’.

I have to say the end of the show seemed slightly anti-climactic. I’m not sure if this was the vibe for everybody, but I have just gotten so used to the clichéd encore I was expecting more. They simply played ‘Emperor’s New Clothes’ and exited after a brief thank you. None-the-less, it was a truly memorable show and the perfect way to cap off Slam Dunk’s 10 year anniversary. 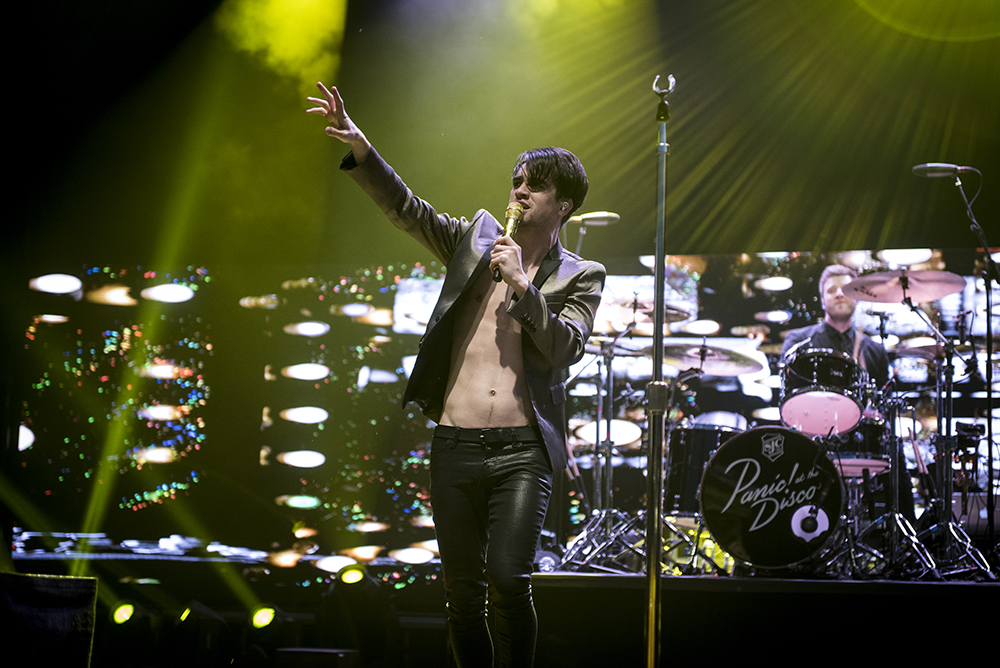