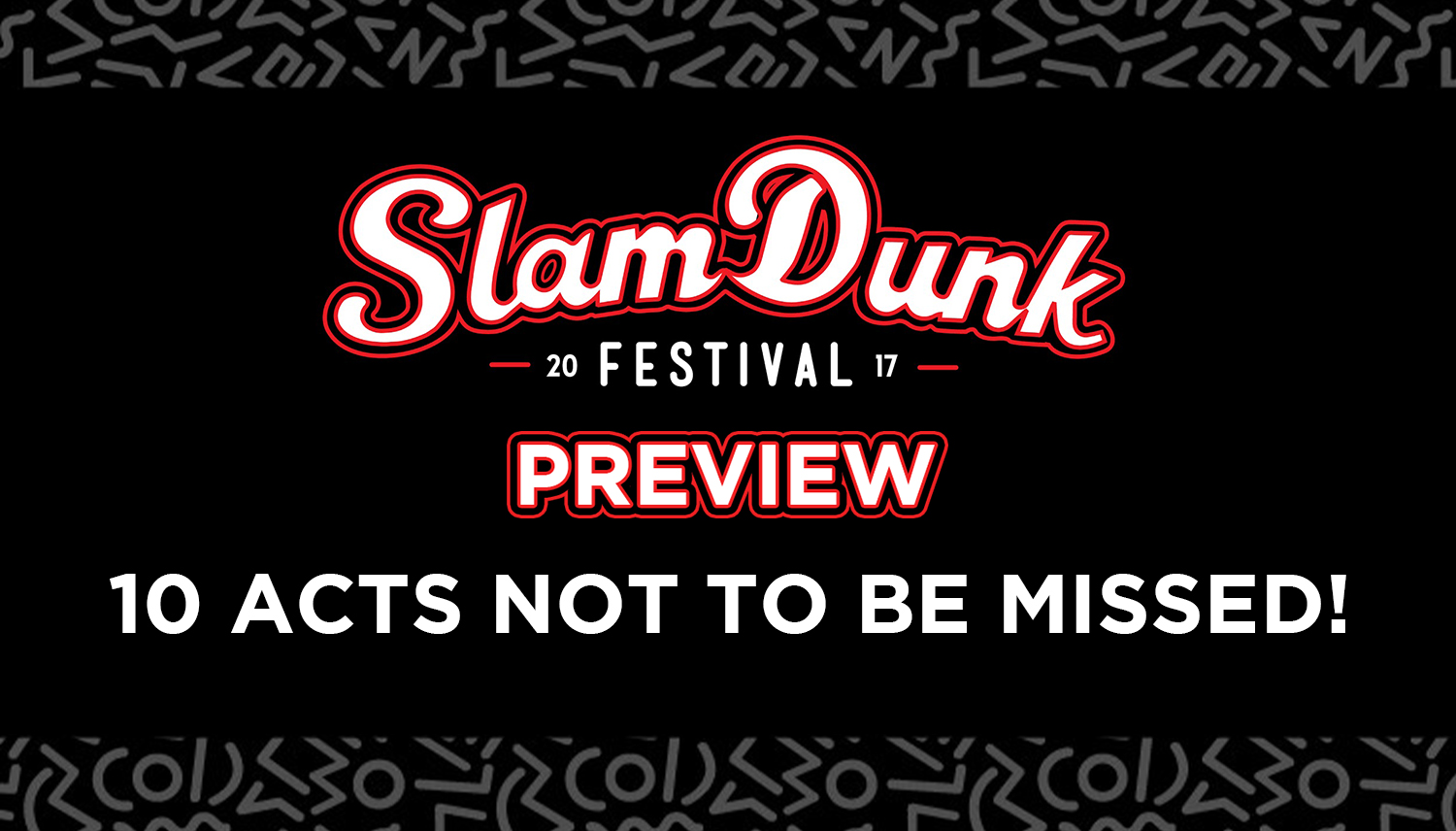 Offering an unparalleled display of pop-punk movers and shakers across 8 stages, Slam Dunk Festival is set to celebrate all things alternative as it welcomes incredible one-off anniversary performances from blistering headliners Enter Shikari, debut albums in full with American pop-rockers Cute Is What We Aim For and We The Kings, a special reunion performance from Madina Lake and the final-ever shows from We Are The Ocean. But apart from the blatantly obvious, we thought you might want to make sure you checked out some of these rad acts over the Bank Holiday weekend…

Let’s start with a cliché, shall we?

We all know how important it is to support upcoming artists and bands and you never know when you’ll stumble across the next A Day To Remember or Fall Out Boy. Slam Dunk is a festival that has given now huge bands a platform before others have, so with this in mind, the humble folks over at Rocksound, in collaboration with Slam Dunk have once again teamed up this year to give an unsigned band a slot at one of the biggest parties of the summer. Whoever wins this contest will without a doubt deserve it, so why not kick off your day on the Rocksound Breakout Stage and support the winners. You never know, you could have bragging rights that you saw this band before they hit it big time! (A.J)

Speaking of upcoming bands, also featured on the Rocksound stage are Welsh five piece Casey. This emotional charged band have made huge waves considering they have only been about two years and after their debut release Love Is Not Enough, they show no signs of slowing down, as they will be coming fresh off of a sold out UK run with Boston Manor. If you want powerful songs with hard-hitting music, soft ambience and extremely impactful lyrics, Casey are a must! (A.J)

Counterfeit. formed in 2015 out of London, England. Consisting of five members, Slam Dunk Festival has seen them before. Performing at the festival in 2016 and currently touring their debut album ‘Together We Are Stronger” which released in March of this year. As a band they landed a record deal in November 2016 with Xtra Mile Recordings, allowing their album to come to life. This year Slam Dunk Festival will see them perform amongst the likes of Set It Off and We the Kings. (J.F)

Next we skank our way over to the Fireball Stage and to spice things up, we suggest a good dose of Goldfinger! Goldfinger aren’t strangers to Slam Dunk festival after their previous, and extremely successful, appearance in 2015. Whilst ska may be an acquired taste, we can guarantee you have heard songs penned by frontman John Feldmann, considering his huge list of writing credits with Slam Dunk alumni such as All Time Low, Panic At The Disco, Stick To Your Guns, as well as bands from this years line up such as Beartooth and Reel Big Fish! If the sun is out and you’re in the mood to party, Goldfinger are the band to get you dancing with their off beat tunes and energetic live performance. (A.J)

I Prevail formed in 2014 out of Southfield, Michigan and currently has four active members. Having found their sound in a Taylor Swift cover posted to YouTube in December 2014, they released a debut EP “Heart vs. Mind” in January 2015. A positive response saw their debut album release in October 2016, titled ‘Lifelines’. Already somewhat seasoned performers with experience on a number of tour circuits, they will play this years Slam Dunk Festival for the first time as well as Vans Warped Tour. (J.F)

Crossfaith are a Japanese electronicore band originating in Osaka, having formed officially in 2006. 2008 saw the release of their first demo and most recently they have released work titled ‘New Age Warriors’. A collection of three songs ‘Rx Overdrive’, ‘Kill’Em All’ and ‘Revolution’ as well as a music video for ‘Rx Overdrive’. 2015 allowed for their debut at both Slam Dunk Festival and Vans Warped Tour in North America. Slam Dunk Festival 2017 will be one of many stops already made this year whilst touring as support for UK band ‘Bury Tomorrow’. (J.F)

Memphis May Fire formerly known as ‘Oh Captain, My Captain’ is a metal core band originally formed in 2006 from Dallas, Texas. The band is currently made up of four members with the fifth having left at the end of January this year. As a band they are signed to Rise Records. September 2016 saw the release of “ This Light I Hold”, the title track and second single to their new album. This single features Jacoby Shaddix of Papa Roach with the remainder of the album releasing in October of last year. This year MMF are set to join the likes of Neck Deep and Set If Off along with Slam Dunk headliner Enter Shikiri. (J.F)

A mooch over to the signature stage will see our next pick Milk Teeth rocking the stage. Punk quartet, Milk Teeth, have been on the up and up the past year since the release of their debut album, Vile Child, on Hopeless Records and after a run of extremely successful tours, most recently opening for Creeper, expect a crowd surfer on your head and to shake your shoulders about and dance. Having recently confirmed on their Facebook that “Recording’s done”, expect the odd new song to possibly debut over the weekend! (A.J)

Tonight Alive hails from Sydney, Australia having formed in 2008. This year has already seen them tour with You Me At Six and the end of May this year will have them performing at Slam Dunk Festival alongside other acts including Deaf Havana and Don Broco. Their most recent work is single ‘World Away’; a teaser to let us know that new music is on the horizon with a release date sometime this summer. ‘World Away’ appears to be a nod to their past works with a heavier sound, possibly inferring a move away from their pop-rock album ‘Limitless’. Expect to hear some brand new tracks from these guys over the weekend fir the first time! (J.F)

Finally, what’s a day without some chart toppers? Don Broco are set to be main support at this years festival on the main stage to give a performance you will not forget in a hurry. Expect dancing, crowd sing-alongs, bouncing and most likely a fair few dodgy shirts. Two albums in (and a third recorded and on the way), Broco are seasoned veterans to the touring scene, having multiple UK sell out tours and coming off the back of their first US tour, they champion summer festivals, be it Slam Dunk (appearing previously 2011, 2012 and 2015), Reading & Leeds or Download, this band’s showmanship and versatility know no bounds, which is why we implore you to not miss them! (A.J)

Whether you’re at Birmingham on May 27th, Leeds on May 28th or Hatfield on May 29th, Slam Dunk Festival 2017 will be the ultimate alternative party of the summer!

TICKET INFORMATION
Advance tickets £44 or £49 with after party are on sale now. www.slamdunkmusic.com