Rockers You Me At Six and All Time Low tear up Manchester Arena! 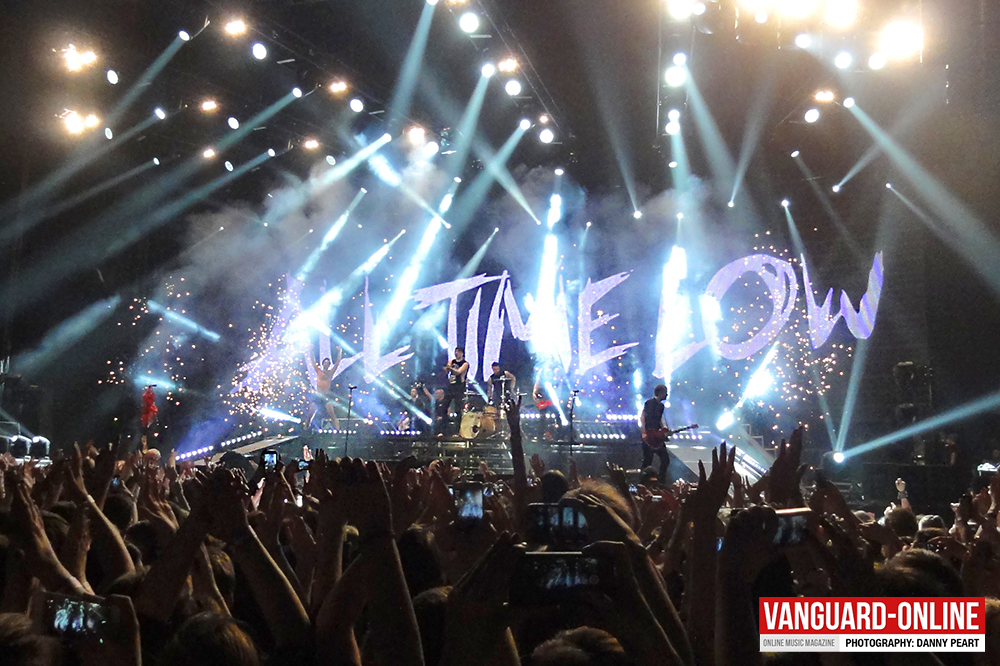 Tonight marks a point in the history of two very hard working bands over the past 10 years. All Time Low and Britain’s very own You Me At six join forces to the delight of many fans to co headline a set of arena shows across the UK, for what is set to be a very entertaining tour.

Walk the moon (6) are tonight’s openers and they provide some hype for the early turnout. A small section of the crowd closer towards the front provide a welcoming cheer, as others just turning up are somewhat intrigued to see what they can bring to the show, as they emerge onstage to the Lion King soundtrack ‘The Circle of life’ before jumping into opener ‘Tightrope’ which gets peoples attention with it’s upbeat sing along chorus and pounding drums.

Frontman Nicholas Petricca takes the front foot and calls for some early participation from the crowd as he teaches them the words to ‘Jenny’ so everyone can be involved in the bouncy chorus, and for the first time tonight the floor is moving rather enthusiastically. ‘Shut Up and Dance with me’ continues to add to the fun, as Manchester Arena slowly fills up.

The band looks tight as a unit and play confidently throughout the set on such an intimidatingly large stage, as guitarist Eli Maiman is making the most of the giant space as he flies around the stage battering his guitar whilst dodging the frontman as he engages with the crowd.
An exceptional cover of The Killers ‘All These Things I’ve Done’ provides an opportunity to get everyone involved and warmed up for the rest of the night, as even those who are uncertain with Walk The Moon can’t resist the urge to sing along to the rock/pop classic.

The fan favorite ‘Anna Sun’ closes the short set and surely helps draw in a few new Walk The Moon fans that have been won over tonight by an upbeat and fun performance. A perfect start to the night, and surely one strong enough to see the Ohio indie rockers back in the UK soon with a large following at each show.

Next up is Co Headliners All Time Low (9) who have a point to prove tonight; that they could easily be headlining Manchester Arena as You Me At Six will be later this evening.

The curtain drops and a wide curved screen displays a video to introduce opening track ‘A Love Like War.’ Deafening screams ring through the arena as the four members of All Time Low run to their positions with beaming grins across their faces, as front man Alex Gaskarth stands with his guitar on the platform at the front of the stage demanding the crowd to get clapping along to the intro, before sparks fly from the stage as the chorus kicks in. You can already tell tonight is going to be a set full of explosive surprises!

Fan favourite ‘Lost in Stereo’ gets the crowd bouncing and ‘Heroes’ gets the first mosh pit of the night, whilst Alex makes use of the supersized stage by running to the back to one of several mic stands scattered across the stage for the breakdown.

One thing we have noticed from tonight’s performance is that All Time Low have picked up a few tricks from the time spent touring with Green Day over the past year. A more crowd participating focused set filled with the “hey hey!” chants and T-shirt gun to fire out a few free T-shirts for lucky members of the crowd who manage to catch them as they shoot across the arena

As ever, Guitarist Jack Barakat is up to his usual antics, with some mid song flashing, collecting bras to hang from his mic stand, and gathering and wearing items of clothing thrown in his direction from the crowd across the barrier.“The more you throw on stage the more I’ll wear” he shouts as he stands sporting a crooked baseball cap and a purple hoodie. “This is what Bieber looked like pre dick head!” Jokes Jack before kicking his way into ‘Dammed if I Do Ya (Dammed If I Don’t)”

Alex takes to another stray mic stand at the stage side to make sure everyone from the sides to the back stay heavily involved. “You guys are fucking crazy!” shouts Alex as the crowd erupts with screams yet again. The band pause for a moment to take everything in and get a group picture from the stage with crowd behind. “We don’t have a valentines Manchester…” teases Alex before scanning the crowd from left to right picking out ten lucky fans across the barrier to join them on stage to sing ‘Time Bomb’, which causes chaos on the stage as both band members and the crowd fly and bounce around, and pose for selfies mid song. “They were much more talented than we are” jokes Alex as the lucky few leave the stage after probably one of the highlights of their lives in front of thousands of rather jealous onlookers.

The Set ends with a well executed performance of ‘Dear Maria, Count Me In’ with its standard breakdown of Alex and Jack simultaneously slinging their guitars through the air to the tech guys side stage, so Alex can jump down into the crowd to finish off the song as Jack decides to remove his clothes and run around the stage in his underwear looking like a lost child in disbelief.

Truth is All Time Low probably still wonder how the hell they managed to go from playing in a garage to co headlining an arena tour across the UK, but you can’t argue that they fully deserve it after a truly entertaining set filled with sing along anthems, comedy, a few fireworks and an all round fun party for everyone involved. If you managed to get tickets for All Time Low’s London Arena headline show, you’re in for a real treat!

You me at six (7) now have a bar set pretty high after All Time Low got the party started. Unfortunately they failed to manage to get above that bar from the off, with a rather underwhelming start with set opener ‘Room To Breath’ which usually features mid set and is the point of the show that the crowd go crazy opening up the mosh pits and start crowd surfing. However tonight as an opener it felt rather reserved and sluggish, appose to coming out with a bang like you would expect them too. Frontman Josh Franceschi also misses his opening lines to the song, but none the less the Surrey lads still give a strong performance.

‘Stay with Me’ follows and things look a little more lively as fireworks shoot across the stage before a full throttle performance of ‘The Consequence’ finally gets people moving on the floor as a circle pit breaks out.

“Good evening Manchester, we are You Me A Six!” yells frontman Josh as he takes a moment to introduce the band to the crowd, who clearly know who they are judged by the ecstatic response from the arena. “Did you bring your voices with you tonight? Let’s test it!” ‘No One Does it Better’ has People on shoulders waving and singing along, before the thundering drums from Dan Flint begin ‘Underdog’ which really steps it up a few notches to get things back on track, while new track ‘Carpe diem’ provides a call to see people bouncing again.

A strong vocal performance tonight from Josh Franceschi and the band are tight as ever as they fly convincingly through every song in the set, they just lack something to get everyone going crazy like All Time Low did.

However ‘Reckless’ turns everything around as it provides the highlight of the set and takes things to the next level, with a bouncing performance including fireworks and confetti blasting from the stage as the chorus kicks in, then pieces of gold confetti fall from the arena roof, leaving the stage drowning in sparkling gold pieces.

It’s not long until the arena is lit up again, but this time by lights of cameras and phones from the crowd for ‘Crash’ and a moving performance of ‘fireworks’ leaving everyone waving and singing along in the moment. “This song is one to jive to” claims Josh, as the set gets moving to the sound of Max Halyer’s guitar thrashing out the opening riff of ‘Forgive and Forget’ before inflatable balls are punched across the crowd. Josh gets the crowd singing along as he and the band leave the stage for a breather.
The encore shows what You Me At Six are really about. Sparks fly behind Josh as the band dive into a blistering performance of the heavy crowd favourite ‘Bite My Tongue’ which both sounds and looks amazing with the screens displaying a set of TVs showing each member of the band across them, with fireworks firing from the stage as the chorus kicks in, and sparks shooting from the front as Josh screams through the breakdown.

‘Fresh Start Fever’ also has everyone at their peak tonight with its punchy chorus before a few appreciative words from Josh before the last song ends the night.
“This year marks our bands 10 year anniversary… Someone told us when we were playing academy’s and club shows, that we would one day play here on this very stage. We didn’t believe them but we’re here.” It’s re assuring to see a hard working British band like You Me At Six work their way up from little club venues all the way to headlining arenas and topping the charts. It’s something we see very little off on this scale in terms of rock music in the charts but it proves rock music isn’t dead, and hopefully many more up and coming bands will take this as a lesson that it can be done with hard work.

The band reviled that after they finish the tour, they are set to play the Aisle of White festival, and headline this years Slam Dunk festival, before they take time out to then write a new album.

‘Lived a lie’ closes a spectacular show on a massive high leaving everyone in the arena singing along, as more confetti streams from the sky for one last sensational moment, before the band leave the stage to well deserved cheers and applause. A fantastically entertaining night all around, with three very strong performances in there own rights. If you didn’t get down to one of the shows on this tour, you defiantly missed out!

Tags: 2015 all time low arena featured Live manchester review walk the moon You Me At Six