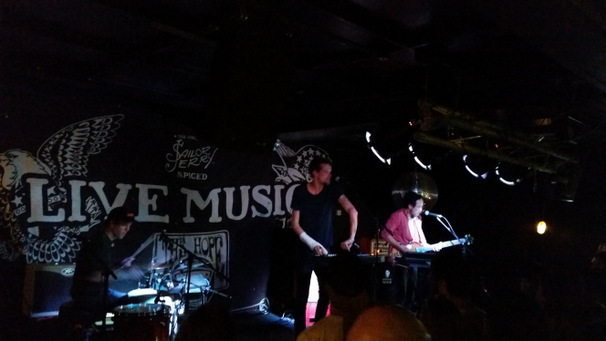 Like a good egg I arrive at the gig early, in the hope that somebody may acknowledge my (completely uncharacteristic) punctuality and mentally validate me as a well-adjusted human. Instead I am told that I’ve obliviously walked pasta massive queue outside and I need to be at the end of it. Embarrassed I duck into the downstairs bar and drink water wondering why the band is late, feeling both proud and insecure about my chilled lemon water, knowing everyone outside in the hot queue can see me through the window.

Ten minutes after I should have been nodding my head and tapping my fingers (on my phone taking notes), I decide to ask the most awkward and gangly chap I see (they’re normally in charge) when the doors open… Oh right, they went on at the allotted time and the people outside are hoping to get in because the place is rammed and the band is killing it and I’m contemplating the social ramifications of iced water. Fuck. I’m on the guest list so maybe, the queue doesn’t concern me, maybe I don’t need it, I’m, dare I say…. Press? Holy shit, I’m no longer iced water cunt, I’m guest list cunt. Upstairs I go.

Great, 20 minutes to pretend I’ve caught the whole set and suck it into my head like Neo learning kung fu. Oh, no need to worry, the gig is tightly packed and the crowd is elated. I slither my way across the wall and down to the side of the stage.

Initially I didn’t know whether to expect some hermetic Berlin electro group, with a few devoted fans, or ‘the next big thing’. Say Yes Dog seems to be closer to the latter, despite mentioning that they had expected the former. Every song they play, single or not, hit’s hard and they cajole the crowd into a mass of squirmy happy, midday drinking synth-pop fiends. Singer, Aaron Ahrend sings with a cool and understated delivery that isn’t as pretentious as it sounds and actually makes the band sincere and accessible.

The infectious energy of the crowd is owed to the bands onstage prowess. The music, relying much on synths, samples and sequencers, could have made the performance a robotic copy and paste but this is not so. The live cyborg drum kit and bassist combine with the impassioned vocals and leave you in no doubt that you are experiencing a well-honed live act. The crowd and band reflect each other: busied, excited and buzzing with the gratitude to be there.

Throughout the set Ahrend apologises for his broken hand and excuses himself if his cast causes him to play a bum note, but as the set reaches it’s climax he still manages to wield a drumstick and join in with the drummer. The set ends, they take a bow and the crowd erupts with applause. As this is The Great Escape, everyone has somewhere else to be and the crowd streams outside instantly. I’m utterly aware of why there was such queue and completely devastated that I was going to home and just do Uni work – 20 minutes with Say Yes Dog and that was the last thing I wanted to do.