Nothing in the history of Pink Floyd has been by the book, or has adhered to the structural norms of the music industry (an ever-changing line-up and a famous case of flying an inflatable pig over Battersea Power Station to cite a couple of examples). Trust mainstay Roger Waters to carry on the trend with his ambitious shot at one-night-only event cinema. Part documentation of his mega 2010-2013 solo tour, part anti-war film and part cathartic exercise on Waters behalf, as he embarks on a personal journey around Europe to the commemorations of both his father and grandfather, who were killed in World War 1 and World War 2 respectively.

Screening in about 2,700 theatres around the world last Tuesday evening, I made my way to the intimate setting of the Triskel Christchurch in Cork, not quite knowing what to expect. My ambiguous approach to the evenings entertainment was augmented when the opening scene featured Liam Neeson describing his memory of seeing The Wall live in London for the first time as a young man fresh off the boat from Ireland and determined to pursue a career in acting. Away from home, feeling isolated and abandoned, Neeson related to what he saw on a personal level, his own metaphorical wall built up by his fears and anxieties needing to be overcome and broken down. This cameo appearance from Neeson acts as a reminder of what The Wall stood for and the impact it had on a generation. It serves as the perfect opening for the forthcoming experience. 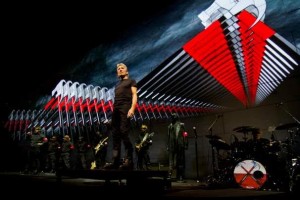 What followed was a masterful juxtaposition between stadium-scale theatricality and private moments. The panoramic and innovative stage production is interspersed with Waters personal pilgrimage with his three children, including his first visit to the beach at Anzio, Italy, where his father was killed in a World War II battle, and to the grave sites of his father and his grandfather. The live footage, captured during the worldwide solo tour that ran from 2010-2013, is as emphatic and inventive as its ever been, with a swarm of children taking to the stage for ‘Another Brick’ to Waters at one point duetting with his younger self. The pyrotechnics and visual effects, as outrageous and impressive as they are, never detract from the performer at centre stage, and that combination is what makes The Wall one of the most powerful concerts you’ll ever see.

The film is a success on all levels. You have to have the road movie in there and the attachment to the absolute, real sacrifice of these men that were taken from Waters by war and senseless conflict, because that relates to all of the other characters who we see all the way through and reinforces the message of the stunning live show. The beauty lies in its relevance today. That the same issues apply to this generation as it did Waters, albeit in a different context. Looking around the room before the movie started, there was a healthy mix of young and old, displaying the undying appreciation for one of the greatest albums ever composed. Two and a half hours of rock history at its very best, leaving my backside ‘comfortably numb’ upon exit, to succumb to a shameful but much too tempting pun. 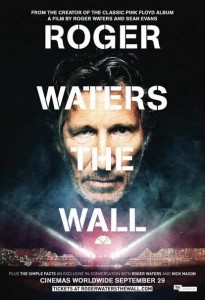