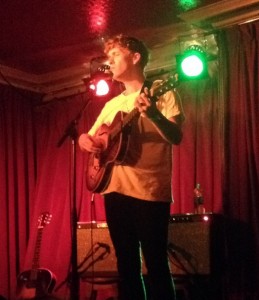 Fans of all ages cram into Whelan’s intimate upstairs venue, eagerly awaiting the arrival of British singer-songwriter Rhodes. A hush of anticipation descends on the crowd as he finally takes to the stage; his selection of vintage guitars awaiting him. Without delay he launches into opening track Run and immediately his impressive vocal ability is made apparent. There is a raw power and vulnerability to his vocal that is highlighted by this live, stripped-back acoustic setting. He delivers an incredibly controlled vocal, appearing to produce affects one would think not possible outside the context of a recording studio.

This is further emphasised by his second track of choice Raise Your Love, an old fan favourite and title track of his 2013 debut EP. Here, Rhodes displays an impressive ability to both whisper his lyrics with heart-breaking fragility and belt them with a breath-taking power that fills the entire room. These vocals are accompanied with perfectly and sensitively played guitar; as they are for the rest of the night.

Rhodes is a self-taught guitar player – having learned from watching his father play and being in bands as a child – but even more notably (and almost unfathomably) he only started singing less than two years ago. It seems fear held him back, and this is something he discusses openly with the enthralled crowd here at Whelan’s; a crowd that hangs on his every word.  The title track of his latest EP Turning Back Around, he tells us, is about a time when he played bass in a band with his friends, and despite enjoying its comfort and familiarity he yearned to move forward with writing his own music and breaking out on his own.  “This song is about the struggle of leaving your friends behind, but ultimately doing something that’s good and that makes you happy, you know?” Latest single Close Your Eyes is about his fear of performing, though it’s third person perspective adds a sense of ambiguity and his flawless, confident delivery might lead you to believe otherwise. Afterwards he jokes about struggling to tune his guitar “these are very old guitars; they don’t like going on planes”. Later he accidentally tunes his guitar a full semi-tone higher than usual and laughs about the unexpected high notes he subsequently faced during the song, though his impressive range allowed him to still sing them with ease.

Despite his demanding presence as a live performer, Rhodes is humble and unassuming between songs. Soft-spoken and appreciative; he speaks openly about the inspiration behind his various tracks.  His debut album Wishes (available for pre-order now and dropping in September) is about love, he tells us, largely in the platonic sense; “it’s about my friends and stuff … people I’ve left behind. The importance of being there for one another and making sure that we are, because, it’s really important. It’s also a little bit about overcoming fears, but the two often go hand-in-hand, I think”. He shares with us his struggles to relate to a friend who was suffering from depression and his subsequent turn to songwriting to try and express himself. The sincerity of his heartfelt and emotive performance is felt by all in the crowd.  He has no problems recreating the dramatic dynamics of Zane Lowe endorsed track Your Soul in a live setting, and the audience react accordingly. Rhodes’ magnificent falsetto soars on the title track of his second EP Morning, which, he shares, is “about a girl … that girl is now my girlfriend”, he smiles. We aren’t surprised.

The crowd express their disappointment when Rhodes lets us know his set is coming to an end.  He jokes about needing to buy his first Guinness so after his final song (which is met with rapturous applause) a fan hands one along to crowd to him, prompting Rhodes to treat us to one final track (met with even more rapturous applause). Afterwards he happily meets and takes pictures with fans (myself included). It has no doubt been a fantastic night for everyone in attendance, including Rhodes himself, who notes with gratitude that the last time he was in Dublin he was flipping burgers at the now defunct Oxegen Festival. It serves to show how far he has come as a musician and I have no doubt his debut album will propel him even further.