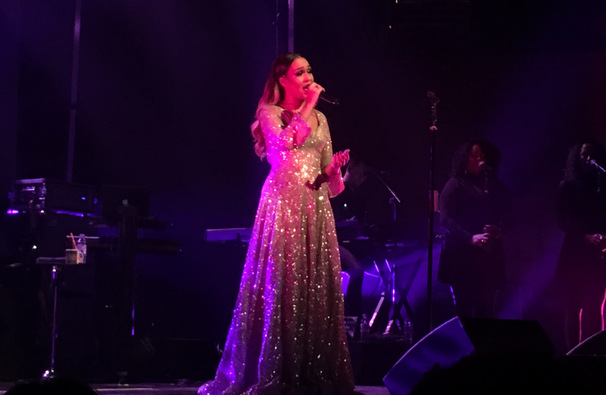 The audience were a bit cranky, Rebecca took the stage half an hour later than scheduled. Some music reminiscent of sea breezes started to play, huge ocean waves and then the band started playing tones like lullaby music. Rebecca walked on to the stage to the delight of her fans. She was wearing a long gold glittery ballgown, looking like a Princess. Her hair was scrapped back at the front going into a high ponytail of loose curls. She opened with ‘Oceans’ and woah, I was absolutely blown away by her smooth voice, the type that melts your heart. When the guitarist did a solo, Rebecca jumped around and danced. Swaying back and forth she told the fans to get up and dance. What a difference from the little shy girl in X factor. She has bloomed into an amazing vocal artist.

I could hear Rebecca coughing in between singing and with a hot tea on stage it looked like she was harbouring a cold. Not that it made any difference to the effortless tones of her voice. ‘I Hope’ was the next song. Its one of my absolute favourites and its about coming out of a really messy relationship and getting to that place where you choose to forgive the person who hurt you. This song was first played on Graham Norton’s BBC 2 radio show in October 12th 2013 and wasn’t released on iTunes till November 24th 2013.

Rebecca has a Scouser voice which is a million miles away from her singing voice (in this way she reminds me of Lisa Stansfield). She told the audience how good it was to be there. “Love it. Yous are the best crowd. I’m going to be playing a few songs from me first album and me second album and me new album. And I really hope yies have a good night. I wanna see yous up having a good dance. Emmm just have a ball” she giggled away.

She then sang ‘Backtrack’ a song about someone who is cheating but they have an answer for everything. This song only made the American debut album ‘Heaven’ as it wasn’t produced in time for the UK album.

The piano tinkers away and Rebecca clears her throat with a cough. “This em, this next song I wrote em, it was for me first album and I wrote it about dysfunctional relationships and I wrote it….I think sometimes in life you learn things about yourself as you grow up and things. I started to analyse why do I keep messing up in relationships. And as well as that there was this couple I always used to see in the street. They were absolutely in love but every day you would see them kicking off arguing with one another. And I started to think about relationships and I started to think about what makes people crazy in love. And I thought about it and I thought actually sometimes people haven’t been taught how to love. And so they act love out the best that they know how. And so they play games and they manipulate and they do everything they can. Cause all they wanna do really is hold love but they don’t know how too. And so I wrote a song about five six years ago now with Eg White. It’s still one of the, em, most powerful songs I’ve written, I’d say. This is Shoulder To Shoulder.”

Eg White has also collaborated with Will Young on Leave Right Now and Adele’s Chasing Pavements. Shoulder To Shoulder is about a destructive relationship where you love each other but know your no good for each other. Rebecca sings this with such heartfelt emotion. It’s done with only the piano and the two backing singers involved.

Straight after Rebecca went straight into ‘Teach Me How To Be Loved’ again with only piano and keyboards accompanying her.

On to ‘Superwoman’ which started off with a very strong gospel feel to it.

‘Run Free’ is next, it feels like a fast paced Mica Paris track. Rebecca really got into this one using the full stage to dance around with her fellow musicians.

Rebecca then walked of the stage and jazzy music gets played. The guitarists change their electric ones for acoustic and even the drummer picked up a guitar.Back on with a different but beautiful long ball gown with metallic black and steel colours, she started singing and then stopped. I thought she sounded great but she went on to tell us that she had the wrong mic attached to her dress and it was sounding really low. She said “I’m starting again I just thot it’s probably best not to wing this. So I’m just gonny be two seconds awright. Too many Scottish whiskeys back there which I’m not complaining about”. She was so right to do this, total respect for her and she really did sound better with the right equipment, so good call. 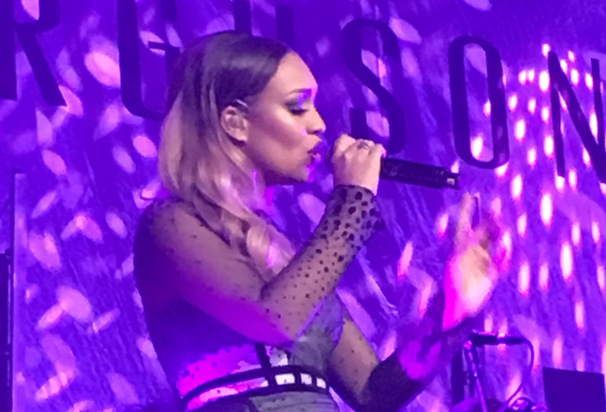 Before her next song Rebecca opened up telling us about her chat with Eg White her co writer. She told us she turned to Eg and said “Do you know what it is Eg it’s not about fame it’s not about cars it’s not about big houses but actually the only thing that’s important in life at the end of the day when it’s all said and done is love.” The crowd cheered. “Eg said to me. There’s your chorus there. And that was that and so em ‘Nothing’s Real But Love’ basically came from a conversation I was having about life and about love. About what’s really important and about sometimes you can get lost in the unimportant.” Rebecca then blew us away with ‘Nothings Real But Love’.

The next song ‘Mistress’ was the most emotional song she’s ever written so far. She wanted it to be a song to encourage woman to never settle for second best. “You’ve got to be number one like a princess. It’s not good enough”. She was dancing away again smiling to her guitarist. Her coughing in between singing had stopped. Perhaps that backstage whiskey was medicinal. A lot of the audience were also up dancing.

The next song ‘Pay For It’ was from her new album Superwoman. She told us it was her favourite song from the album. It was a really hard album for her to write it because it was really emotional. “I pretty much put my heart and soul into the album.” She cried a lot as it touched on a lot of personal subjects. She wrote about her break up and she wrote about being left with a baby. She tells us it’s really hard to talk about in interviews now but she did it because it was such a taboo subject. A subject that woman don’t challenge and they just go and hide, or cover it up, throw it under the rug and pretend it didn’t happen. “I really challenged meself and I thought no I’m gonny be open and honest in every interview even if it hurts me. This particular song was the one song that I just had an absolute ball writing”.

Getting the crowd upbeat and dancing again she sang ‘Don’t Want You Back’. There were lots of orange and lights flashing, unlike earlier when it was pinks and blues. She kept swinging her arms into her dress when she was dancing and giving it a nice flow.

‘Too Good To Lose’ was next, this was a track that kept the fans on a high. It’s about the start of a relationship and you just can’t stop thinking about the other person and how much they mean to you.

Rebecca then left the stage while her guitarist did a solo with the backing singers. The audience were clapping and stamping their feet for Rebecca to return. And what a return she made, singing ‘I’m Every Woman’. This must be a favourite for female singers as Jess Glynne also sang this at T in the Park this year. I have to say though, hand on heart, Rebecca sang it even better than Whitney. Mind you, I should hold my hands up and add I’m not a Whitney fan.

Before playing her last song ‘Bones’ she said said, “Thank you! Yous have been absolutely amazing. What a great crowd. Love yies. I love coming up ere. This next song is my single and I can’t wait to come back. Yies are always amazing.’

What a great show. Rebecca was eloquent and had a perfect singing voice. You really got to know the real Rebecca Ferguson from her heart. She was funny, caring and very honest. One of the best voices to come out of the X factor if you ask me. 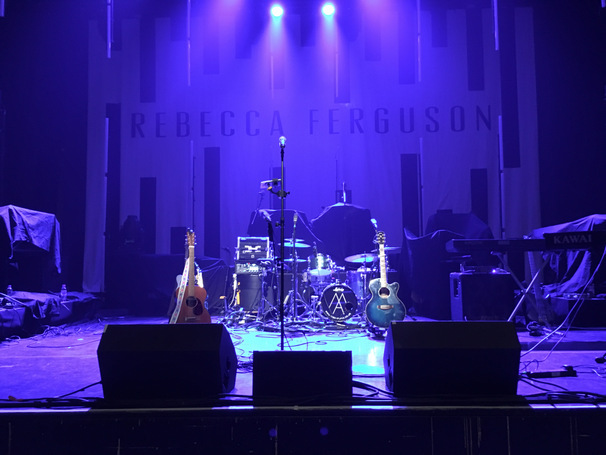