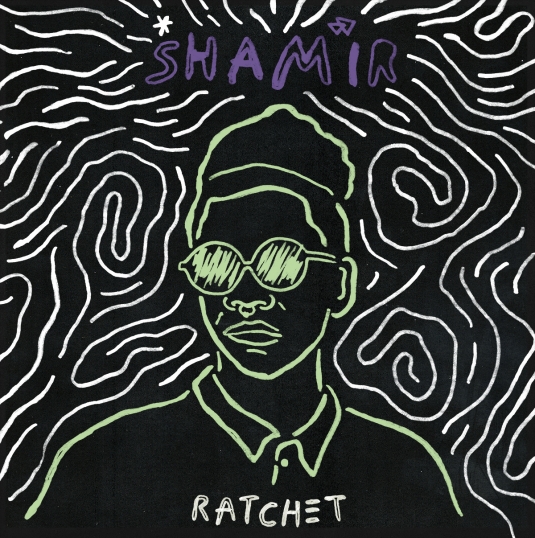 Ratchet is an impressive album for its creativity and originality of style, notable for the peculiar yet familiar mix of disco, funk and electronica styles that the young Shamir Bailey has woven into his debut album. Throughout the runtime he balances a delicate mix of flamboyance and barely restrained weirdness without ever feeling pretentious, and a feeling that real joy and creativity went into the writing permeates the tracks. As a whole the LP is an indulgent and pleasant experience and some of the songs will creep high in to your estimations without you noticing. It is at its strongest when indulging in its self-aware Disco-Soul combination that flirts with the notion of a synthpop style. Some of the more jolting themes seem almost overproduced but this is gleefully deliberate and used to create a distinctive effect. With Ratchet as a starting point it’s easy to imagine Shamir’s sound becoming absolutely sensational in the future if he continues to hone his unique genre-defying sound, and leap some of the hurdles encountered in some of the downbeat tracks.

The album slides into its themes with a slow opener – Vegas – the most striking element is the highly distinctive voice that is the trademark of the budding artist. The androgynous countertenor is well suited to his particular sound, never falling into an overly masculine or feminine mode but remaining somehow outside the spectrum in a rather captivating way. Vegas itself drips with funk through its contrasts of an almost minimalist beat with bursts of jazz sax highlighting the otherwise droning rhythm. This doesn’t quite set the tone right for the album, allowing it to keep surprising the listener and itself with some sudden changes in makeup.

The next few songs really begin to show off what the album is really about, with Make A Scene starting to include more, almost jarring, soaring electronic elements and On The Regular being a song which I think perfectly encapsulates Ratchet’s style. The latter song is ever changing and capriciously dramatic; he begins to add catching leitmotifs and unorthodox rhythm to make what I think is the first stand out song of the album.

Call It Off continues with this theme, incorporating psychedelically distorted voices and making more of the repetition. Judicious use of a tinny cowbell throughout the entire album is never more obvious than here, and though Call It Off and the following Hot Mess may mark a slight low point in musical creativity they begin a trend of more narrative lyrics, which until then feel largely scattered and less bound by a unifying theme in each song.

Demon signifies a marked upswing, being another of the stand-out tracks on this LP. Its seemingly autobiographical lyrics are sung to a relaxed but soulful melody which complements the lyrical themes of a fall from grace brought on by a fiery and emotionally swinging relationship.

In For The Kill continues to delve deeper into the disco genre with a retro guitar style and screeching brass sounds over a snare backdrop. This chorus more than any other offers a groovy and catchy melody whose restrained confidence gives an air of well-deserved cockiness. Youth too begins to sacrifice the more jarring elements of the earlier songs in favour of a more smooth and toned sound, but now producing a relaxing track with pleasing crescendos.

The penultimate song; Darker, stands out for its stringed introduction and as a slow burning ballad sung in a voice bordering on falsetto. Composed of little else other than two repeated synth chords and breathy sound effects Darker provides a relaxing lull in excitement but fails to capture enough of the soul that underlies the album to compensate.

The final track, Head In The Clouds, feels like a summary of the album; blending the more soaring vocals with jarring electronic motifs. However rather than being a pleasant plenary it comes across as a mongrel and brings the album dangerously close to feeling repetitive.

Ratchet flows well by grouping its primary themes together and in such an order that they slowly merge into one another, but Demon, In For The Kill, and On The Regular stand head and shoulders above the rest which I think disqualifies the LP from running its course entirely smoothly, but certainly not in a bad way as these tracks are certainly going to make it into many of my playlists for a long time to come.