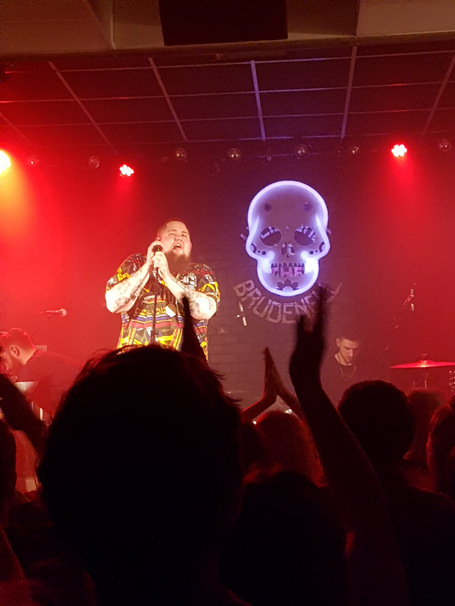 “I’ve been waiting fucking ages to come here Leeds!”, the crowd erupts into raucous applause and you can anticipate the energy to follow. It’s difficult not to warm to Rory Graham as he humbly introduces himself and his 5-piece band to a tightly-packed Brudenell Social Club on a cold November evening. He has a vocal-chord-soothing cup of rum in hand and a cheeky grin.

Fresh from supporting Tom Odell on his ‘No Bad Days’ tour, with a blood red lit stage and emblematic skull in the background he kicks off with ‘Rueben’s Train’ and ‘Wolves’. It makes you wonder about the journey Rag‘n’Bone has been on to derive his inspiration. Older than his years, through a fusion of blues, soul, gospel and hip hop he tells stories of guilt, redemption, salvation and treachery. He has a collection of songs that would be native to the Django Unchained soundtrack or a deep south plantation.

“My mum says I only write miserable songs, that I should write some happy ones. Anyway this next song is about a serial killer”. He continues to crack jokes in between songs and takes his time to engage the audience, composing himself between tracks; and you see behind the attitude and these gargantuan set of lungs an unpretentious and well-mannered man.

The stand out songs were ‘Hell Yeah’ and ‘Life In Her Yet’. Both had rugged undertones, uncomplicated percussion. Rory isn’t content with giving a so-so performance, he belted out the verses and hit the trickier notes. However he took care not to overstretch himself and avoided getting into an Adele or Frank Ocean ‘cancelled tour dates’ situation.

The only bone I have to pick with Rag‘n’Bone is that he skipped ‘Sirens’ from his latest album, it’s got the raw power and energy that would have capitalised on the bass he delivers. There were also pleas for My Business’ (a hip-hop lead track from an earlier EP) but after a flawless set and double encore you can’t ask for more.

See him if you can get tickets. With a Sold Out UK tour, increased radio play and decibels that could wake the dead, I can only see Rag‘n’Bone Man’s future going from strength to strength; and whilst I wish him all the success I think the intimacy and warmth may well be lost on an arena tour.