With a new approach to making music and a new set of influences, electro-pop duo Purity Ring bring their sophomore album another eternity to The Brudenell.

With the stage draped in fairy lights, Purity Ring put the audience straight into the middle of a music video with their setup. Producer Corin Roddick laid down the beats centre stage surrounded by a series of prisms, which turn out to be MIDI inputs that illuminated as they were drummed. The strobing lights become an integral part of the show, matching the mood of each song nicely and adding to the band’s well-defined aesthetic.

Singer Megan James’ dreamy, child-like vocals were largely on point, though occasionally overpowered by the heavy production on the new set of songs. Dressed in a white catsuit, she owns the stage throughout the set and also played a role in its visual element when she wields beams of light with mirror gloves during a couple of the songs.

I was left slightly disappointed, however, with the lack of interaction with the crowd in between songs. James appeared visibly uncomfortable when she was forced to confront the audience during a technical hiccup midway though the set, despite the Brudenell hosting a friendly crowd who clearly loved what she was doing.

Opening with trip-hop banger Stranger Than Earth, the set consisted mostly of new material from another eternity, though we were treated with performances of some of the band’s most well-known tracks from 2012’s Shrines, including Lofticries and Fineshrine. Though it may not be to everyone’s’ taste, the new LP takes a much lighter mood–I was glad the duo stuck to performing their new songs as having a set with equal amounts of new and old material wouldn’t have made it as cohesive. Energetic tracks like Begin Again and Bodyache get the crowd going and receive the best response of the evening.

Purity Ring have clearly put a lot of effort into making their shows a spectacle for their audience, but with a short set clocking in at just an hour and only glimpses of personality appearing from the band, we couldn’t help but want more from the night. 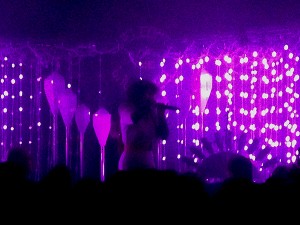 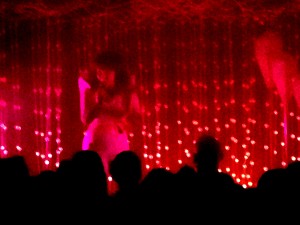