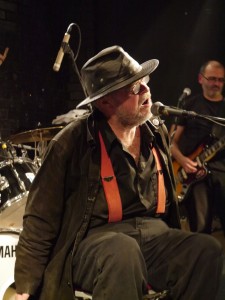 A band with going on forty years under their belt, Pere Ubu, are riding a career-high, confusing expectations and leading us to expect the unexpected. It is thirty-three years since I first saw this band and David Thomas is no longer the bouncing ball of weirdness that hurtled around the stage singing Misery Goats but he has tapped a deeper layer of surrealism, richer than it was in 1981. This version of Pere Ubu has none of the original band, formed in 1975 but carries the same sideways look at the world, tied together and driven by Thomas.

Confusion One: Pere Ubu are their own support band. Opening for themselves, they improvise and work ideas out, exploring ideas they might use in future albums. A long wandering tale fronts an extended jam. Surreal stories spin out as Thomas sits on his chair, braced, hatted and seemingly becoming ever more comfortable in his own skin. He takes off his boot and pulls up his white sock before turning to the band and saying “we’ve got ten minutes”. He calls for “the Croatian national anthem – Follow The Cow” – “Sixteen bars – count them off”. The crowd is left charmed, puzzled and entertained. 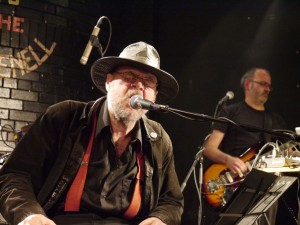 Confusion Two: Pere Ubu return for their main set with their very anti-rock and roll set up by playing a blues – probably the most straight forward thing they play all evening. The set-up is not at all rock and roll, the band rarely play riffs at the same time, driving up the energy of a rock band. Things are much more arranged, with everyone playing their own part, interlocking and making a complex sound. As David Thomas said of the last album; “fight the tyranny of dance, stand still”. The stage sees keyboards, theremin (and not an ordinary one, a bent one), clarinet, computers, drums and a guitar that sometimes shifts down to bass tones (other times the bass is sampled or keyboard generated). Mr Thomas, upfront, is less of a dictator than last year but still clearly steering proceedings. 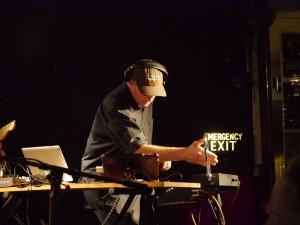 Confusion Three: The band avoid playing any of their hits. Okay, so they don’t have any hits, but last year they played quite a few oldies, this year they don’t. It’s up to them and no-one shouts requests. 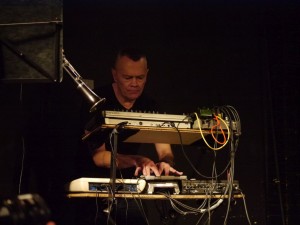 Confusion Four: The band mock their audience. “We specialise in post-menopausal men – for every one of them that comes, five people don’t come. For every lady , three people come”.

He tells us he is working on behalf of the Imperial High Command for a Martian invasion. When the fleet descends, his girlfriend will be impressed with her mighty boyfriend.

“We’ve reached my favourite part of the show; the end. This song is called Buy More Merchandise”. 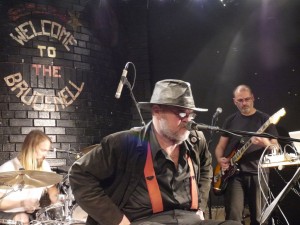 Confusion Five: The ideas in the shows get more far-out, the longer the history behind it. After a strange ditty, repeating nonsense lines about a monkey, Thomas tells us “there’s some logic going on there but I don’t want to know any more”. Sloop John B is twisted and mangled. Caroleen is a very rare rock moment – “Her name rhymes with gasoline, her perfume……. It’s turpentine”.  David rhapsodises about Port Talbot and its beautiful miles and miles of refineries. I suppose he is from Cleveland………

Confusion Six. I’ve seen Pere Ubu, or David Thomas or Two Pale Boys, or another iteration at least half a dozen times, over three decades and the last two shows have been the best, the most interesting, best played. There’s little looking back with David Thomas.