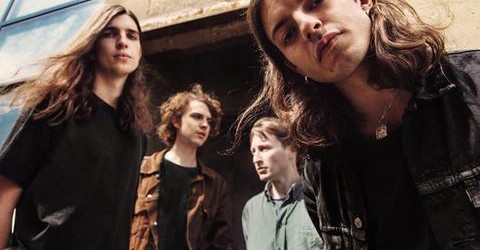 Pale Seas have been releasing music as far back as 2012, but the Southampton band only released their debut album, Stargazing For Beginners, in October this year. After a prolonged, self-imposed exile in a medieval abbey on the Isle of Wight, they have finally embarked on a tour of the UK and Paris. This evening, they are playing in an intimate venue beneath The Hug and Pint in Glasgow’s West End.

Pale Seas – comprising Jacob Scott (lead vocals), Graham Poole (lead guitar), Matthew Bishop (bass) and Andrew Richardson (drums) – have created a brand of ethereal, dreamy and enigmatic rock music that somehow manages to convey the influence of their hometown by the sea as well as musical influences. Lyrical references to the sea abound on songs such as ‘Bodies’, which still sounds huge and triumphant in such a small setting. The influence of bands such as The Pixies and Radiohead can be heard on ‘My Own Mind’ and ‘Someday’, while at times they recall ’60s guitar bands. The result is a sound that is fresh and distinctive, and their 45 minute live set is confident and brimming with intensity.

Fans have waited a long time for the return of Pale Seas, but the result is well worth it. Catching them live now is all the more rewarding, as their audience will no doubt continue to grow.