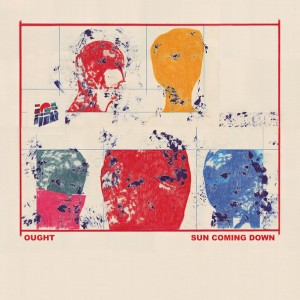 Ought’s 2nd studio album, Sun Coming Down, showcases a band growing into their already impressive talents, and then taking those talents in an even more experimental direction. On their first album, More Than Any Other Day, their music was impressive, but risk averse. Others were doing similar things, maybe not as well, but not a million miles away. But On Sun Coming Down any restrictions have been cast off. Freedom is evident in everything, from vocalist Tim Beeler’s modulating voice, to the whole arrangement of tracks. This is a band doing it differently, and doing it well.

Each track has a unique selling point contributing towards the bands march to originality, but if there is a standout number, it’s Beautiful Blue Sky. The lyrical skewering here of mundane interactions (Well, how’s the family? How’s your health been? Fancy seeing you here, beautiful weather today, How’s the church? How’s the job?) along with a set of nouns related to military and industrial capitalism (War Plane, Condo, New Development) really makes you sit up and take notice. What is so striking about this track is that it is a statement against something, it is taking up a definite and aggressive stance against macabre normality, it’s a pity that this is so radical, but it is.

The angular nature of post-punk lends its tone of conflict. With Ought’s decision to reject the standard song format of their last album and instead go for a more idiosyncratic approach they allow themselves to explore this inherent advantage. On Combo the song kicks off with an onslaught of guitars, it sounds like you’ve missed the start of the track. This is unsettling. Good. This is post-punk, you’re supposed to be alert and uncomfortable. Then about a third of the way through the song it stops, and the real beginning occurs, if you’re not paying attention at this stage the records not for you.

Ought are signed to Constellation Records, this is Godspeed! You Black Emperors’ label, I’m not reaching too far when I say Ought must then have a political identity. In a recent Reddit AMA when asked about music and politics they said “its very difficult for politics, philosophy, etc to be divorced from any art, and that their expression in art is very valuable”. This is borne out in their work. Men for Miles is a fast paced sweaty panic riddled track which peaks with the line Excuse me, would you say there’s a chance of bringing this whole fucker down. The rest of the tune is seriously pissed off too. Here is anger at the system, with intent.

Lyrically the band is set, but does the playing match that? Most definitely. It is consistently tight, with the work between Tim Keen on drums and Ben Stidworthy on bass especially noteworthy. This is really noticeable on Celebration which is also where Beller Darcy’s vocals attain their most Ian Curtis like levels. The Joy Division comparisons are present throughout, it’s even true of the lead singer’s appearance and movement.

This band has so much potential and when you know that as a group and individually Ought have so much more music in front of them, it’s really affirming to listen to.