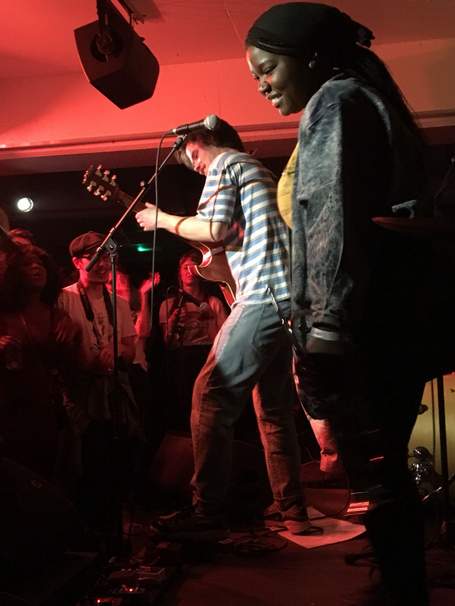 He’s a little bit like a young Jamiroquai to me he is, is Oscar Jerome. He’s handsome though scruffy, clever, a little bit street and a little bit political. He’s also into the jazz thing and the funk thing, in a big way. Jamiroquai Mark II he is not though. Whereas Jamiroquai has more of a pop sentimentality, I find Jerome likes to get lost in funk jams, he also likes to change tone mid-song, he completely changes the script and the sound. More than this, unlike JK, he uses his voice more as a percussion instrument, he mourns, hums his way through songs, eating his lyrics rather than singing them.

Last night at the new micro-club Ghost Notes, in Peckham, Jerome and his four band members crammed on to a tiny platform, enough to put them neck and shoulders above everyone else. They plied some beautiful sounds, gravitating around what I can only describe as a resonant calypso guitar. It felt beautiful, like a tropical breeze, you could see the very trendy jazz set at the front swaying in it.

But Jerome doesn’t just write music for Hawaiian funk focused ice cream vans. At times he broke the whole thing down, the music suddenly and deliberately became discordant, instruments competed against each other for pace and volume. At the same time Jerome’s vocals changed mid-song, from sexy and sultry to punchy and passionate, he sung high and then completely changed his range, dipping down a few scales on the opera singer slider, as if he had a multiple-personality disorder.

But all of this, all of this nuance and change of direction, was done whilst maintaining a jazz funk vibe. That vibe was the backcloth, the running track and the object of devotion. And there was something very rich about it, in some ways it was a classic funk sound, in some ways it wasn’t, but it was the richness of it, the quality, so hard to articulate, which kept the audience, albeit a very chatty audience, luxuriating in the set from start to finish.

Jerome loves his jamming, he loves his instrumental solos. He did a few guitar ones, and they were extremely impressive. When he let rip on his guitar on his best track to date, Subdued, at the end, I thought he was going to break the thing. He hit the strings so hard it felt like you were being dowsed with machine gun fire. Similarly, there was a saxophone solo too, with such fury did the sax player play, that at times I thought his head was going to pop off.

He’s got a bit of stage presence too, has Jerome. He wasn’t particularly cocky, although he had a glint in his eye and smile, which made you think he could be. But no, on stage he presented himself like a college kid, stumbling his words, saying ‘yeh’ and ‘but’ alot and making this ‘tse’ sound, almost a tutting sound, possibly to ground himself, which he did by flicking his tongue off the back of his upper teeth. The whole humble demeanour was incredibly endearing and a refreshing compliment to his precocious talent. At the end of the gig, as the band left the stage before the encore, someone gave him a pat on the back and said ‘Brilliant’. Jerome turned around, almost as if he was  surprised to hear it, and said ‘Oh, thanks’.

Last word to the venue itself, because Ghost Notes is one hell of a clubbing proposition. With wafer biscuit dimensions, its located on the fifth floor of an old unused multi-storey car park, and accessed via a side alley, which you walk down against all your better judgment. The club itself faces a railway line, which means that at night as well as watching the band, you could, through the large window behind the band, also watch the night trains travelling away from and towards Peckham Rye station. At one point we were all treated to the rather surreal sight of a Balfour Beatty railway maintenance train pounding past. It was white, quite short and had several cranes on it. It was an extraordinary thing to see and weakly illuminated by the surrounding street lights,  moved across our field of vision in a ghostly manner. It turned a lot of heads and only added to the glorious wonder of the Oscar Jerome experience.

If you like jazz, funk and soul give these a listen…

Korokoko’s Abusey Junction is likely to be the softest and beautiful thing you’re going to hear in 2018. It is at the end of the day only an instrumental, only an Afrobeat instrumental – but it is a monumental instrumental – a monstrumental! It is at the same time soothing and emotional, it is like that feeling you get towards the end of a good cry. Sadness and warmth combined. It is the gentle beats of the percussion that soothe. It is the plucking of the guitar strings that pull on your heart ones. In this way it is reminiscent of ‘Mediterranean Sundance’. Its long, but it deserves to be long in the same way that Fat Freddy’s Drop ‘Hope for a Generation’, Sebastien Letellier’s ‘La Ritournelle’ and The Hot 8 Brass Band’s ‘Sexual Healing’ deserve to be long. After all if you’re going to have a cry, get it all out eh?

I’ve just read elsewhere that the track was written by Oscar Jerome, which was a real coincidence because I included at the bottom of this article a review of Oscar Jerome’s ‘Subdued’ which I recently likened to Fat Freddy’s Drop ‘Hope for a Generation’ as a ‘whilst you’re here  you might be interested in…’ addition. In ‘Greedy for Music’ it says

The song is a ballad, written by guitarist Oscar Jerome, on the roof of a compound in Gambia, where the band spent time last year immersing themselves in the soundscapes of the region. http://www.greedyforbestmusic.com/journal/friends/abusey-junction/

The track is included on an album called ‘We Out Here’ recently released by ‘Brownswood Recordings’ designed to promote new jazz talent. https://weouthere.bandcamp.com/album/we-out-here

Subdued is the first track on Oscar Jerome’s soon to be released  EP Where are your Branches. Its an epic in the style, although not quite of the magnitude, of Fat Freddy’s Drop’s Hope For a Generation. It starts off like with a rich mix of soul and acid jazz twangs, just like Jamiroquai. Jerome, however, true to the title of the track, adds a mournful tinge to his punched out impassioned soul vocals, like a dog licking his wounds, similar to Dallas Tamaira. It ends with a slow building and yet melancholy instrumental, I get the tiniest hint of Bebel Gilberto’s Autumn Day Song.