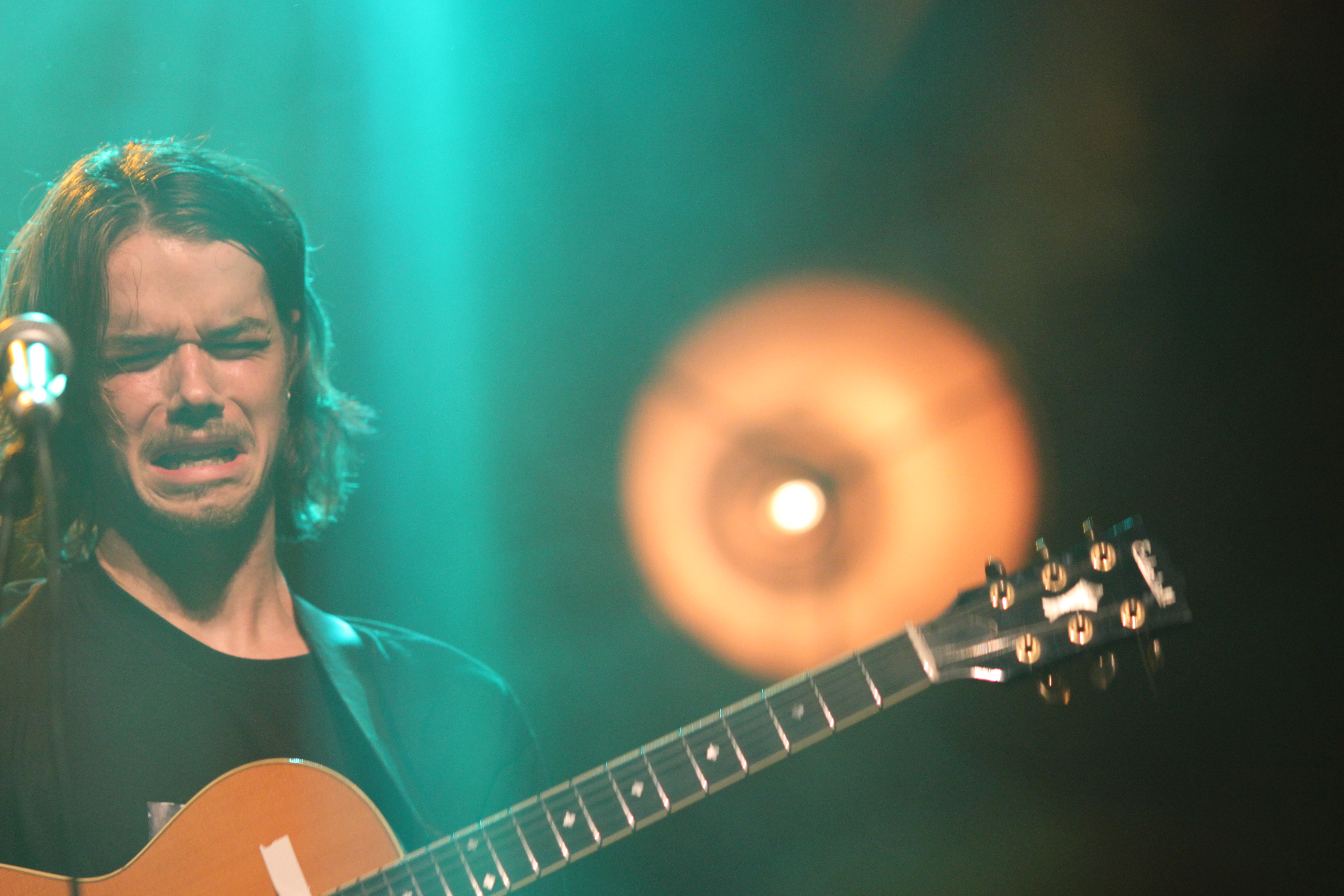 There’s something about Oscar Jerome, he aint your usual singer, and he aint your usual bloke. First of all lets be clear, he is hugely talented, self-assured, sensual and soulful with that last word spelt in capital letters. And despite this he appears also to be incredibly humble (again all of that word in capital letters). In between songs he communicates to the audience with a sincerity of soul (there’s that word again) but also finds it difficult to put a full stop to his sentences, which reminds you of the fact that he has only, in relative terms, recently evolved out of adolescence (I’m guessing, incredibly there’s no Wikipedia entry for Oscar to tell me otherwise). Who knows, demonstrating such vulnerability he might have been happier to have been elevated and slightly protected from the audience on the night of his gig at the cavernous brickworky arches of the Village Underground. Some months ago in the cute micro-venue, Ghost Notes in Peckham, the crowd, a pretty sophisticated set of beard-stroking nu-jazz connoisseurs, was nothing but adoring. The crowd at Village Underground was younger and there was a hint of laddism about the place. Two young men flouted health legislation and shared a cigarette. I was expecting to soon hear shouts of ‘Brexit! Brexit!’ Another two quietly mocked Oscar for his sincerity whilst simultaneously being enthused by his talent, its difficult to be fully sincere when you’re young. However, having said all this, the crowd were generally greatly appreciative. Oscar absolutely rocked it three or four months ago when he played Peckham, and he did the same at the Village Underground.

Oscar’s live work is based mainly on the relationship with one of the several guitars that he plays, an acoustic guitar made electric, which goes by the name of Eccleshall. A comparison of Eccleshall guitar images on the internet with the one Oscar plays was inconclusive, and yet I feel 90% sure its the Eccleshall MC (the enquiry goes on, I did ask Oscar, but it seems he has more important things to do than help me fine tune this review). The point is though that the jazzy, tropical, beautifully organic, hollow sound made by the guitar is the trademark of the Oscar Jerome experience. It is always a bit of a surprise on the live stage, partly because I always think I’m going to get a more electric sound from Jerome, and partly because I’m not sure that same guitar sound always stands our so strongly on the recorded tracks. I expect funk but it veers closer towards Bossanova at times. And yet, perhaps the most astonishing thing about watching Oscar, is the way, from time to time, he’ll reach a climax by pounding that delicate looking guitar. Its a bit like watching a guy beat up on a butterfly, though a very sturdy butterfly, because that guitar can take it, but all of a sudden when Oscar is beating it to a pulp, and you see it bowing and bending, you think ‘what the fuck is happening here?’ Its gobsmacking, eye-opening. When he does this the decibels climb. In Ghost Notes with Oscar being so close to the audience it really felt like we were being sprayed with bullets. At the Village Underground, with there being a distance, there was not so much of this feeling, but it was still impressive to watch Oscar’s flexibility, dexterity and intensity on the strings. His facial expressions were the kind of thing you expect on Clapton rather than a guy who in many ways is slap bang in the middle of a nouveau vague of acid jazz. The acid jazz thing is something that I’m pretty sure Oscar has no desire to be typecast by, because he does draw on diverse influences, and I don’t really think he has any intention of going in any direction other than that which life and serendipity will take him. And yet I still can’t help feeling that there’s a kind of gaiety to his music, a playfulness, a fun, and a sincere desire for political consciousness, which is reminiscent of the buzz that was created by the early 90s acid jazz scene.

There’s something else about what Oscar does too, which adds to his game. He is clearly a guy with a lot of musical friends, which I might dare to call associates knowing that Oscar himself refers to them as ‘family’. In his gigs, where possible, he tends to bring the family along, and get them in on the act. He is a man for collaboration. At the Village Underground besides his regular band, Oscar invited a rapper, a guest drummer and a trombonist from another band that Oscar plays in, Kokoroko. With Oscar then, its rarely just Oscar, its more Oscar and guests, a kind of variety performance drawn from what one assumes is the mythical south London jazz school, said to have spawned so many artists and bands in recent years. This helps Oscar in many ways. He is undoubtedly the guy with the talent, and those around him must surely feel grateful that they’ve been allowed to come along for the ride on the back of his coat tails. But for Oscar it allows perhaps to introduce some well needed spice and variety into his shows, which might otherwise feel a little flat and samey at times. Oscar has already written some great pieces, the best of which is, according to scientific experiments conducted in my head, Subdued. Furthermore his tunes almost always require a level of emotional, tonal and digital dexterity and flexibility, which make for a captivating performance. However it has to be said, that with the exception of one or two, the actual tunes themselves don’t always leave an indelible mark in your musical psyche, in the way you wish they sometimes would. The hits Oscar, the hits! Well the thing is about Oscar, that is so endearing and interesting, is that this is clearly a man who is not writing for the hits, but rather is a on a creative journey, and he’s making it with so many others. The impression I get of Oscar is that he is a genuine ‘artist’ he’s on his own journey come what may, and that what is important is not that he pleases other people, but that he continues to enjoy it and grow on it. And what a pleasure to have joined him, albeit briefly, on it.

More recent reviews from the 2018 tour