London band The Imaginary Hat have pulled it off with their single Phonograft. They are currently looking for bass players in the London area.

Tony Allen’s jazz tribute is as rich as Christmas cake 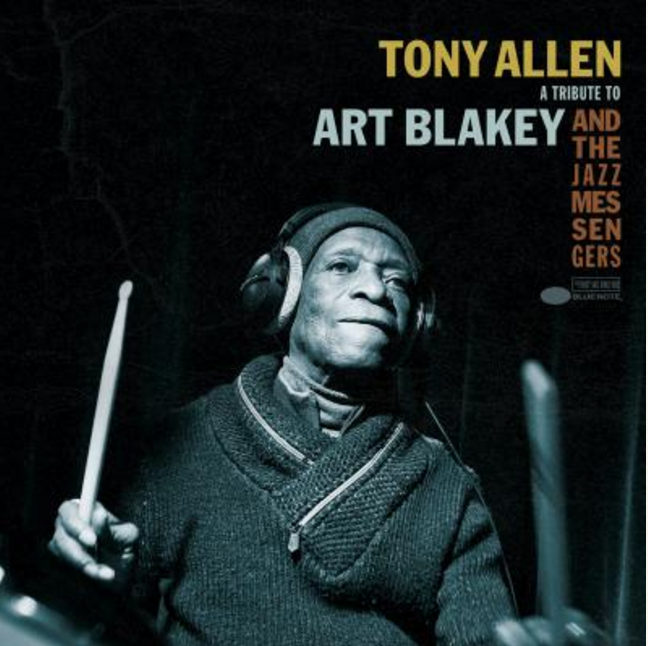 It has a rich sound, as rich as one of mother’s home made Christmas cakes, the kind with lashing of brandy, nuts and dried fruit galore, and whole sugar cherries.

Moanin bandstands like an alley cat enjoying his realm, breaking into crescendos of joy and features a neat sax solo.

Politely starts off with a melancholic and uncertain piano motif, there’s a hint of danger, a story to be told of night adventures in a dangerous city. I’m reminded of the stuff contemporary jazz-lounge fusioneers Llorca and Acqua Bassino produced at the beginning of the millennium.

A Night in Tunisia comes next, a hustle and bustle kind of a tune, interspersed with chicanery and a little irony.

The Drum Thunder Suite starts off as if depicting the energy of a bazaar, mutates into the backing track for a private detective in quiet pursuit of his muse before periodically bursting into life, as if to celebrate another success in solving crime.

The good guys always win and this is as good a jazz EP as I’ve heard.

I hear some unusual things down in the reviewing cellar of Vanguard House and this is one of the strange delights that keep me excited for new music and willing to remain chained to the damp and rat-infested walls of the editor’s palace.

Opening on a proper overture, something belonging to the hybrid opera / musical theatre/ jazz dreams of Leonard Bernstein; this album starts out just right, with a touch of Candide meets On The Town meets West Side Story, flavoured with middle-eastern horns. A touch of rain sound effects and we have ‘Umbrella’ – a sound picture of a lonely soggy stroll in the city with a melancholy female voice in Arabic and plucked strings. Programmusik sees disco meet funk meet jazz brass and so the album flows, organically through to the Egyptian-sounding semi-chants in Ankaria, reminiscent of the sounds of a radio in a souk, brought to life by a chorus stepping round a corner with an orchestra. Like I said – musical theatre. It’s fun.

Omar Rahbany is twenty-seven and Lebanese. Somehow he has brought 180 people into this album, whether singing, soloing or in orchestras and created a remarkable fusion of world music, jazz, musical theatre and the light classics. It’s a very personal vision and quite unlike anything I’ve heard before. This isn’t someone borrowing a set of colours to add to their genre – it is someone with a love for music of the world and a home in multiple camps, bringing them together, none subordinate to the other. So we have moments of French film soundtrack, colours of big-band jazz, Arabic tonalities, Lebanese heartbreaker songs, Mediterranean tap-tap beats and Syrian interwoven clap-beats, all fused in this big-band theatrical environment. Perhaps it is to be expected; the region being a melting pot of cultures over the last couple of millennia. A jazzy bass burbles along and piano keys flutter decoratively above a swinging beat. A thin reedy horn floats over the proceedings. An electric guitar solos over the backing.

Coming from a family of nationally-important composers and musicians, Omar has a sense of importance and fuses orchestral intricacies with more modern ideas, like soul vocals, snippets of news radio broadcasts and, perhaps inevitably for an album based in Beirut, sounds of rocket-fire. Omar says: “The melting pot of cultures I grew up in, the double-edged sword that shaped me as a person, the confusion, the creativity, the struggle itself is my identity. I am a citizen of planet Earth and my nationality is that of a human being. This is my Passport”.  Hence his ability to drop in an Argentinian Tango, full of duende and tension but played on middle-eastern-sounding strings.

Themes recur and intertwine, with snapping intersections and tunes that follow winding paths, much like the soundtrack to a long and involved title credits scene in a movie. Sweet ballads like the almost ‘Up Up And Away’ of Mouwachahat arrive and tinkling keys and jazz drums sweep them away into a syncopated jam. One moment it is Michel Legrand, the next it has a touch of the Neil Cowley Trio.

Meet the music of a fevered ‘what-if-Bernstein-had-been-born-in-Lebanon’ dream. The dream you should have had but never did.

TaxiWars – “Fever”     is a cool and grooving jazz triumph

A honking horn, a hanging but swinging back-beat and hurried spoken lyrics pushing heavy on the word “fever” – it’s a great beginning for this album that finds the sweet-spot between jazz and hip-hop. Out of Belgium, via New York, the fusion of Tom Barman from art-rockers, dEUS, and saxophonist Robin Verheyen is fresh and ultra-cool. They have recorded with their touring band of the last year and come up with a jazz equivalent of Les Negresses Verte. On Soliloque, they channel the spirit of Serge Gainsbourg’s later, spoken records, quoting his typical wordplay all over the place (“zero, hero”, “cons se cons”, etc).

The album grooves deep, like a top-notch dance-tent band yet carrying the rhythmic sensibilities of a jazz band. Vocals that visit French as well as English add vignettes of street life and late night ponderings of the mysteries of the heart. The sax doesn’t hurt, giving that expression you find in old Blue Note records. The drums, however, mark this out; elastic and mobile, they shift around the beat while always leaving it in place. The rhythm section tells me this is proper jazz – it’s just that I don’t care – it is MUSIC. It grooves and it feels cool, it carries some nice tunes (Airplane Song, for example) and is lyrically picturesque. Robin opines: “At big festivals, people are yearning for a good groove. If nothing else, that’s what we have to offer. If the groove is deep, people don’t wonder: Hey, these guys are playing jazz. It’s music.”

Click onto Controlled Demolition for a drumming masterclass in swinging beat, where vocals add percussive impulse and sax squonks it further on. Or try Egyptian Night, the closer, for a low-down jazz groove and melodic exploration of a mood. This is NOT jazz light but it is jazz for people who don’t seek jazz out- it just IS. It does what it does and you don’t need to stroke your beard. Nodding your head is inevitable though.

There’s real soul in this track, it makes me want to cry. There’s soul and a little electronic magic in the background.

Also recently released and worth a listen…

Subdued is the first track on Oscar Jerome’s soon to be released  EP Where are your Branches. Its an epic in the style, although not quite of the magnitude, of Fat Freddy’s Drop’s Hope For a Generation. It starts off like with a rich mix of soul and acid jazz twangs, just like Jamiroquai. Jerome, however, true to the title of the track, adds a mournful tinge to his punched out impassioned soul vocals, like a dog licking his wounds, similar to Dallas Tamaira. It ends with a slow building and yet melancholy instrumental, I get the tiniest hint of Bebel Gilberto’s Autumn Day Song.