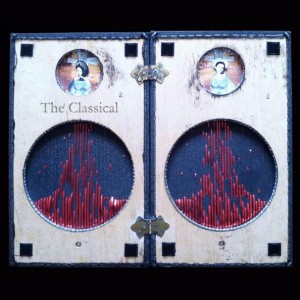 Imagine. You see an article for an album made by an ex stage actress and a free jazz drummer. It mentions Scott Walker, Antonio Sanchez and The Fall. ‘Brechtian’. Others might just skip it and go back to skimming through their Twitter feed but not me. It’s not long before I find myself lying on the floor with my knees into my chest, trying to sort out a sore back, earphones in and eyes closed…

The Classical take their name from a song by The Fall (“hey there fuckface”) and are mainly the vehicle for the song writing of force of nature Juliet E. Gordon, accompanied by jazz musician Britt Ciampa. ‘Diptych’ was originally self-released in 2014 but is now being given a physical release on a left-field label.

It begins with a song about a lucid sex dream. With pelicans. ‘The Blue Room’ blooms into a ‘Blue Velvet’-style cabaret song before being cut short by a drum solo. Then, like a machine spluttering into life, the honking rhythm begins. And Gordon screams. Properly fucking screams. Like an asylum inmate having a freak out. And it’s all rather glorious. And horrifying. The track acts as a challenge; go on or quickly click stop and run away.

‘The Blue Room’ is the most challenging track here. Though unusual, the rest of the album is accessible, depending on your listening habits. ‘Shovel and Bevel’ is a wonky pop song. It even has a rather funny video, which features Gordon performing a parody of a front person, mock rock-shape throwing and all.

Some of it is damn near gorgeous, such as the breathy vocals of ‘Byzantine Tango’, a track that still manages to mention the ‘piss of a homeless Roman’ and creeping ‘paedophiles’ with ‘cure all fixers’. Pretty open to interpretation then.

‘Deft With Language’ is a pitying demolition of its poor subject, a Morrissey-esque slither of a vocal accompanied by echoing piano and an incessant conflicting drone. The drumming escalates and the drone grows louder as the track progresses. At the 4:40 mark, Gordon’s vocal just threatens a scream before keeping it’s cool. It’s a thrilling moment on a masterful piece.

The most affecting track on the album is actually the one where much of the musical weirdness and awkwardness is stripped back. There’s even a guitar. ‘Sicily: Catacombs’ documents Gordon’s experience in the catacombs of Palermo. There is a real sense of unease conveyed; both at the sheer exhibition of the dead and the macabre nature of this ‘tourist attraction’ (‘people are wanting photos with the less than recent dead/none of these Americans bring scarves to cover up their greasy shoulders’).

‘Our Lady Revenge’ is a high wire act, the narrator swaying between infatuation and murderous intent. It bounces along helped by parping horns and Gordon’s end-of-tether yelps.

Not everything here works. Some tracks meander (‘Escapeboards pt 1’) and some are a bit throwaway, despite some fun strangeness (‘Driveby’). ‘Diptych’ is worth the effort though. The Classical create a world of their own, a creepy ambience like Donna Tartt’s ‘The Secret History’, full of it’s own language and nightmares. And Juliet E. Gordon is a sta-ah-ahr. She has the alien sexuality and eccentric charisma that deserves an intelligent audience. Hopefully ‘Diptych’ helps her find it.

‘Diptych’ is out on July 31st via Time Sensitive Materials on various formats, including a limited run of 65 hand crafted-as-a-book kind of dealio packaged thingy that is going for $60, if you’re currently burning through cash like a Season 4 Jesse Pinkman.

2 thoughts on “Notebooks Out: ‘Diptych’ – The Classical”