A fully immersive experience, this had the audience rapt. On stage there is a big screen, a small screen, a giant stack of electronics, computers, a keyboard and drums. Oh, and two men dressed in cargo-cult feathered costumes and body paint. Dipped in gloom and illuminated with occasional glimmers of colour or rude flashes of strobe. So – we stand and watch. And are moved by the trouser-shaking bass. 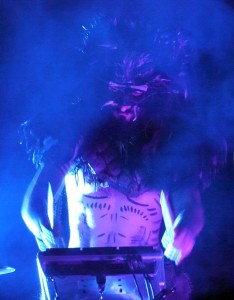 What emerges is pounding drums and keys, wrapped around sound samples and illustrated with cartoons and aphorisms. Opening with a series of Moby-ish messages about having an amazing brain, being things of wonder, we are made of stardust, etc, they move on to darker material, describing the damage people cause, ecological and otherwise – and the individual human desire to overcome it. Cartoons are well used and I’m reminded of ancient episodes of the Old Grey Whistle Test; whenever they didn’t have a band or video, they’d show an old animation, that took on significance as it played randomly against some Frank Zappa track. 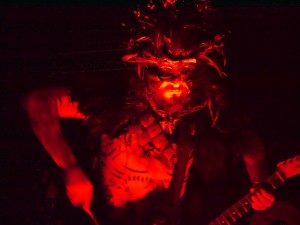 A treated trumpet appears, then a Mr Punch-like Jack-In-The-Green figure appears from the drum kit, bowing a guitar menacingly. Drums rush and keyboard patterns tumble. Wise phrases are quoted alongside shallow Facebook aphorisms. William Burroughs is heard, then B-movie dialogue. The band plays along, like a cinema organist to the movies. Or do the movies shed light on the music? I am reminded of the old joke about fans of The Grateful Dead: Q. What did the Deadhead say when he ran out of drugs? A. What is this awful music! Does Nordic Giant’s Post-Rock stand up if left alone? No, it doesn’t. I didn’t leave full of music. But I did leave overwhelmed, slightly shell-shocked and with that feeling you get when you come out of the cinema and the weather has changed – a dislocated distance from the world. Which makes this a pretty special live band. 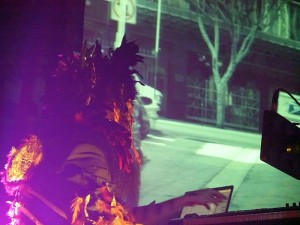 As I leave, the downstairs bar is playing The Grateful Dead’s Doing That Rag, an amazingly rare thing to hear in public, probably conjured up by that special strangeness elicited by the pummeling my senses have taken and a slightly dark magical atmosphere. 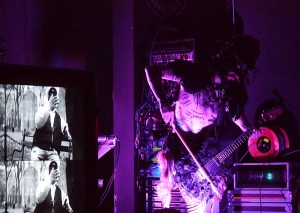 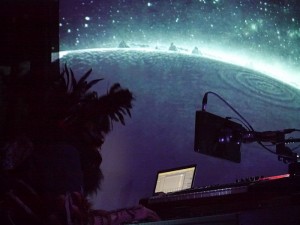 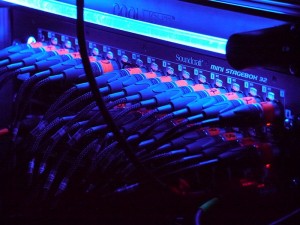