With a title more or less guaranteed to confuse folks looking for a best-of compilation (maybe that’s the plan), New Order release their new album in a high-security fanfare. Streamed to reviewers over security links with warnings not to listen on speakers in a public area, I’ve not seen such care since the Pet Shop Boys wouldn’t let photographers within 50 yards of them at Bingley Festival last year. Maybe it’s an eighties thing. Much like The Pet Shop Boys, New Order manage to cross-over between wide-scale appeal and pop-credibility and can still create a buzz in the press.

It has to be said that New Order, with a sparse release schedule, do inspire excitement among musos of a certain age. There is always a thrill in seeing if they’ve managed it again or have slipped towards senescence. “I want a nice car, I want a girlfriend who’s as pretty…..”, goes opener, Restless, with the retrospection only men of Bernard Sumner’s age can conjure up. And retrospective it is, with washes of synth and a very Hooky bass line and break. Shame it doesn’t have quite that weight of a Hooky line but, as Irvine Welsh says, what’s done is done, be pleased there are two bands now playing New Order music. 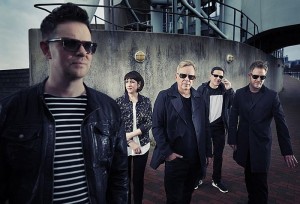 Sequencer patterns and dance beats feature large and Singularity ramps them up to a fevered speed. Tutti Frutti is a proper old fashioned House beat with crooning Bernard as we are used to. A more solid album than the last, this suggests the band have stumbled on a fresh seam of ideas, while still crafting things to the shapes we know and love. There are, of course, unremarkable, merely good tracks but plenty stand out. Take, for example, Stray Dog, where they play frantic dance-trackers to an Iggy Pop narration about love in an Alabama 3 stylee (written by Bernard).

Stephen Morris’ sequencers are upfront here; after recent guitar-based albums, the electronics get front-stage here, alongside guitars, and it rewards the hopes of long-term listeners. Unlearn This Hatred sees those electronics and dance beats centre-stage, as well as a beat breakdown and some lyric messages of self-improvement. There is also a bit more emotion here and I wonder if it is at all related to the return, after 14 years, of Gillian Morris or if it is more a return to roots following the big fall-out with Peter Hook. Hooky’s absence is writ large here and a notable space in the sound, however the band have an adequate substitute, if not replacement, in Tom Chapman.