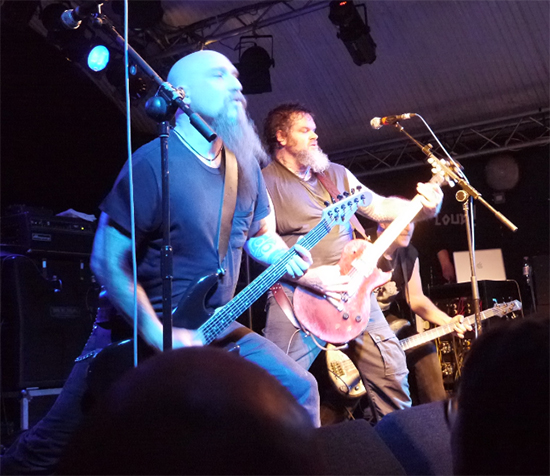 There’s no room to move in the Cockpit tonight. There’s not just a lot of people here but most of them have beards and most of them are big men in grey and black, generating a power station’s worth of heat. There is a buzz of anticipation for a band famous for intensity and toleration is extended even to the support act – The Haxan Cloak, a one man electronic ambient bass fest. I’ve deliberately not listened to any of Neurosis’ records, aiming for a pure experience of something new and all I’ve heard before is Steve Von Till’s intense and strange Lashing The Rye (released as his alterego, Harvestman) and his and Scott Kelly’s album of Townes Van Zandt covers. There were no Townes covers tonight  and no acoustic guitars…..

Famously loud and sludgy, the gig was compulsive and compelling and a neophyte had no idea where a song ended or began. I hear they played 11 songs in an hour and forty-five minutes but I thought it was double that. A Neurosis song will start in dark ambience, lurch into a plodding frenzy, return to gloom, maybe some feedback, return for a second bout and segue into something else via eldritch electronics. There isn’t a moment’s pause – the band, if not stage front, is turned away to their amps, working a wave of feedback or subtlety of shaped noise alongside the hardest working keyboard player in the world. I haven’t heard so much noodling since a Grateful Dead concert, with a couple of minutes of twiddling between every slab of crunching riffage. It seems significant they come from Oakland, California. 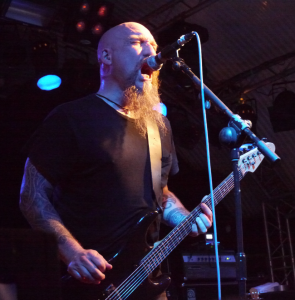 The drummer is versatile, with lots of fills and alternate rhythms, while the bass is so heavy it shakes loose flesh. The keys are absolutely essential and the band rides on effects and echo pedals. Up front are the visual punches of the band – to the right, Scott Kelly, hoarse, big and with a huge beard, taking much of the vocal duties – to the left, Steve Von Till (allegedly a primary school teacher when sweating up a storm with a sludge metal band), shaven-headed and bearded, head pumping up and down to big riffs. The riffs tonight are Tsunami-sized and mostly slow. Kelly made for an imposing presence whlst Von Till gave off a scary intenseness. At the moments when the two guitarists and bassist lurched forward in synchronised attack, the band were almost a normal rock band, an image they took little time to dismantle again through sheer duration and sludgy repetitiveness. The only other time they came close was We All Rage In Gold, where the bass line and opening had a tinge of Joy Division. Joy Division never played so loud, long and heavy though. 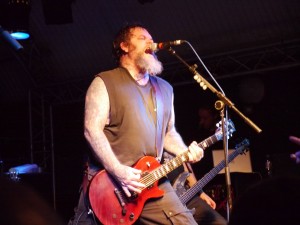 As we filed in from the bar at the start, the band were on stage in the dark, making noises. Someone shouted, “get on with it, you pretentious wankers” but the band weren’t up for banter and they didn’t say a word all night. If you take yourself seriously enough and persist in doing what you do, eventually pretentious becomes portenteous. A huge and horrible noise becomes a cathartic experience. There was a compulsive effect to the continuous sound, moving from sustained tuneless noise to riffage to gentle picking and back, in a fusion of sludge and industrial.

A remarkable experience and a set of songs I can’t sing in the bath. 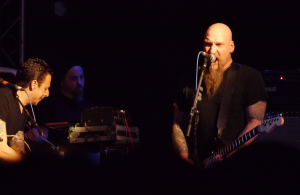