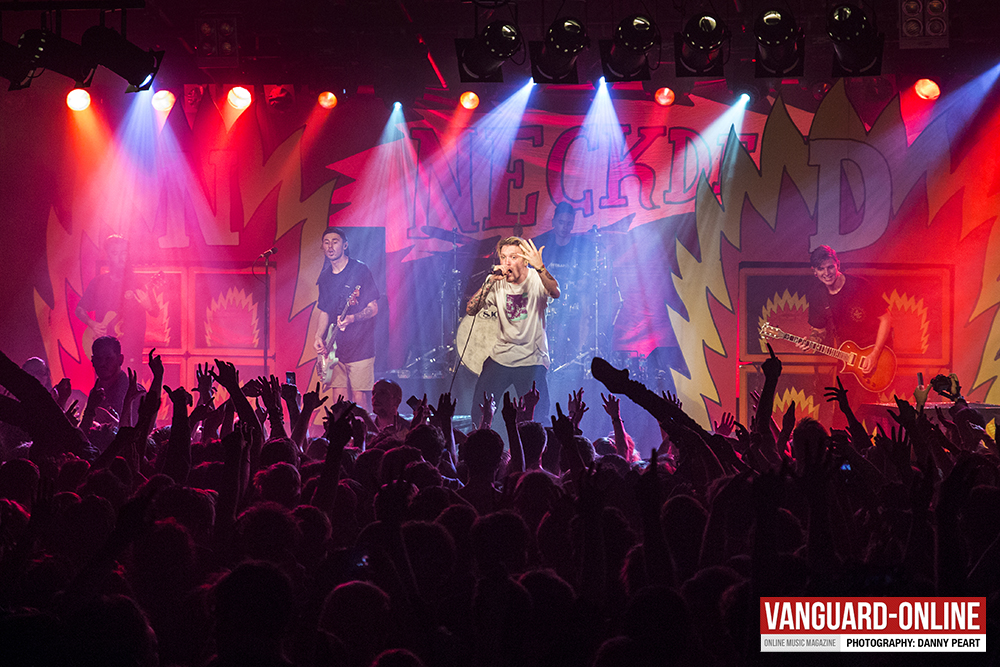 When someone says ‘Pop-Punk’ you instantly think of the heavyweights such as New Found Glory, Blink 182, & Green Day. But even with these names still hanging around, Neck Deep took 2015 by storm with their top 10 UK album ‘Life’s Not Out To Get You’, and off the back of it they are well and truly flying the flag for modern day Pop-Punk. Tonight in Leeds we get to see if Neck Deep can live up to their high expectations. 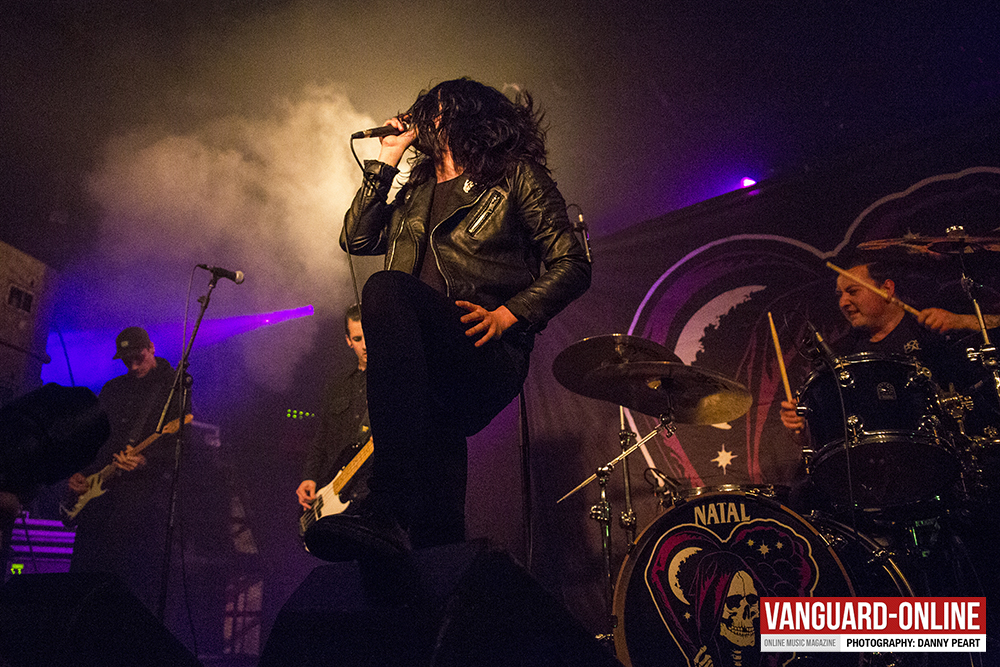 As fans pile into the venue from the city, out of the unusual summer sun sporting their backwards snapbacks, shorts and ‘Neck Deep’ shirts, they are faced with Southampton based Creeper. Unusually labeled “Horror Punk” Creeper (7) bring a set of Punk music with a twist. Taking the stage the front-man Will Gould, like the rest of the band, look like someone from a “Goth” band if you will; head to toe in dark black clothing, leather jacket and long black hair. But as you know, you should never judge a book by its cover.

Creeper are full of energy and more than capable of kicking off the party. A small bunch of Creeper fans at the front lead the way bouncing through their set and as you’d expect this crowd doesn’t take long to get involved. With tracks like ‘Gloom’ and the rapid ‘The Honeymoon Suite’, the lads don’t struggle to get the crowd moving. Will Gould sounds great and has a big stage presence covering every inch of the tiny space left available around Neck Deep’s kit, as the rest of the band follow suit by throwing themselves around thrashing out their guitars and drums.

With an incentive of free items from merch, the call for the early crowd surfers is welcomed by the crowd, and bodies are flying over the front barrier for the first time tonight. Circle pits and mosh pits also break out from time to time as Creeper give it their all. After a short set of frantic madness, Creeper slow things right down for a swaying sing along for ‘Henley’s Ghost’ to close their set off a little more reserved than expected. But non-the less it has everyone singing along and they leave the stage to grand applause. A nice little work out for both the band and the crowd, and we’re sure many more will be back for them next month at Slam Dunk Festival here in Leeds. 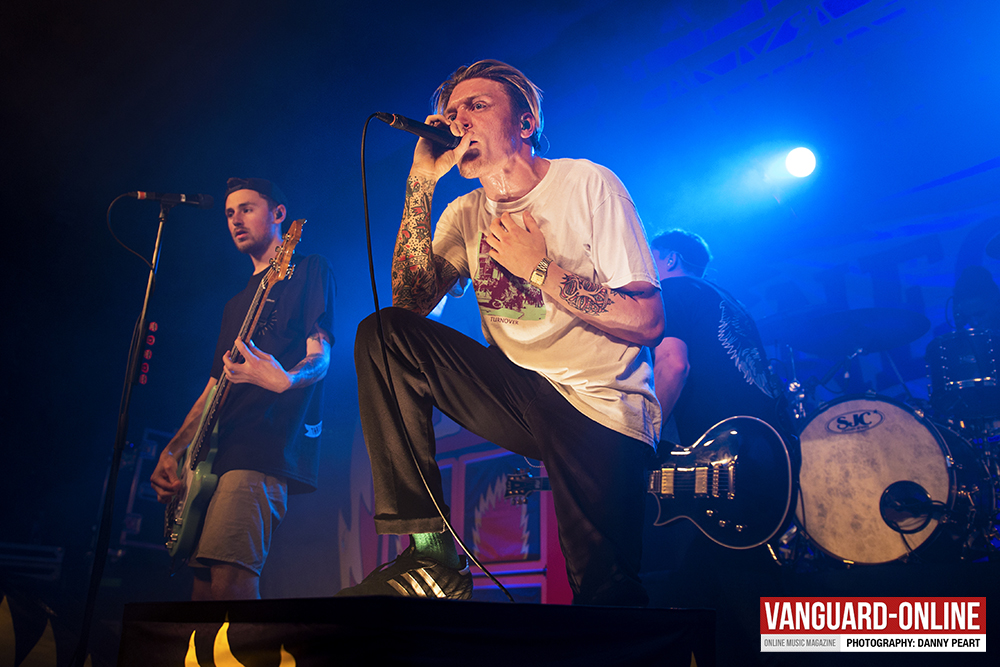 The room suddenly fills up to the point where there’s no turning back, not even for a trip to the bar. That’s because Neck Deep (10) are about to hit the stage kicking and screaming, and that’s exactly what they do with their opener ‘Citizens Of Earth’. It throws us straight into the thick of it with its screeching guitars, pounding drums and even some synchronized jumping on stage from the band that look well rehearsed. A quick trip back to the ‘Wishful Thinking’ days for ‘Loosing Teeth’ shows that the older tracks still hold a place as fan favorites based on the response it gets, as the whole room is bouncing along so high the floor is shaking beneath us.

‘Gold Steps’ only makes things crazier, as the pacey set continues without looking like giving the crowd a moment to catch a breath. Front-man Ben Barlow is clearly having the time of his life, bouncing around the stage grinning from ear to ear, and who wouldn’t be with the whole of Leeds Beckett feeding from the palm of your hand. From here on we have a set crammed with pop-punk madness and a few explosive moments, which turns the union into chaos with crowd surfers, mosh pits and circle pits somehow forming on the cramped floor. 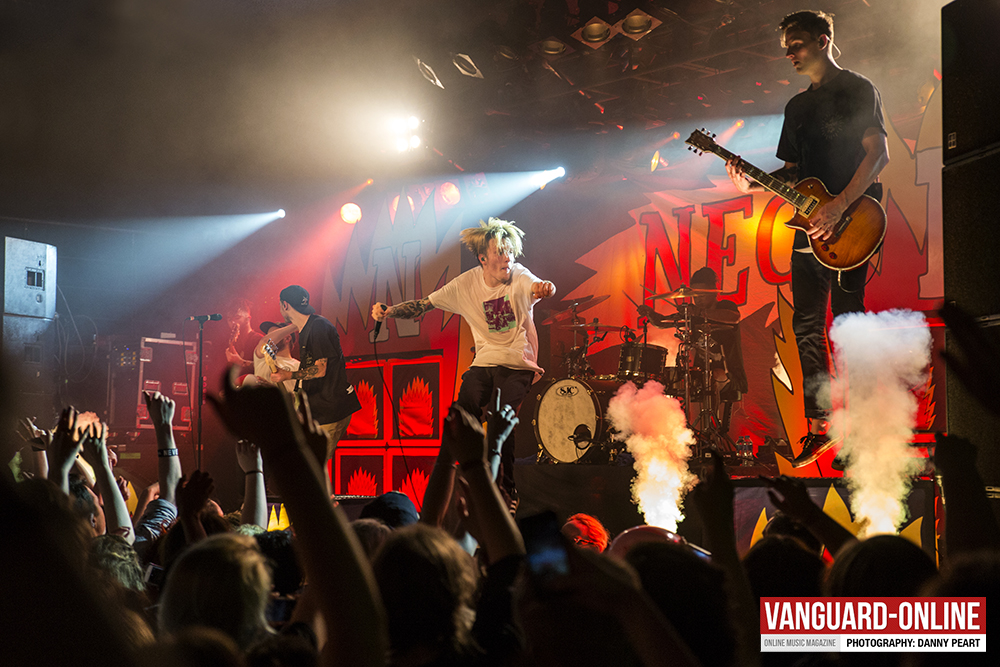 On the stage the band more than fill the stage with their presence which rubs onto the crowd all night. Ben Barlow is patrolling the front of the stage making sure everyone at the front is singing their hearts out, whilst the likes of guitarists Sam Bowden and Matt West are bouncing around like fully charged energizer bunnies thrashing out riffs left right and center stage. Even bassist Fil Thorpe-Evans is shouting along with Ben from song to song in-between some synchronized bouncing with the guitarists. It’s also worth mentioning that drummer Dani Washington has held the set together solidly all night, clearly the rock of the band hidden away at the back of the stage on his platform.

Visually, Neck Deep have made a great effort to make their set look as awesome as it sounds, with amps and backdrops and platforms painted up with illustrated fire, much like their new album cover, which all flash and glow throughout the set. Even a few blasts of smoke in a couple of breakdowns only help bring more fiery moments to the night. 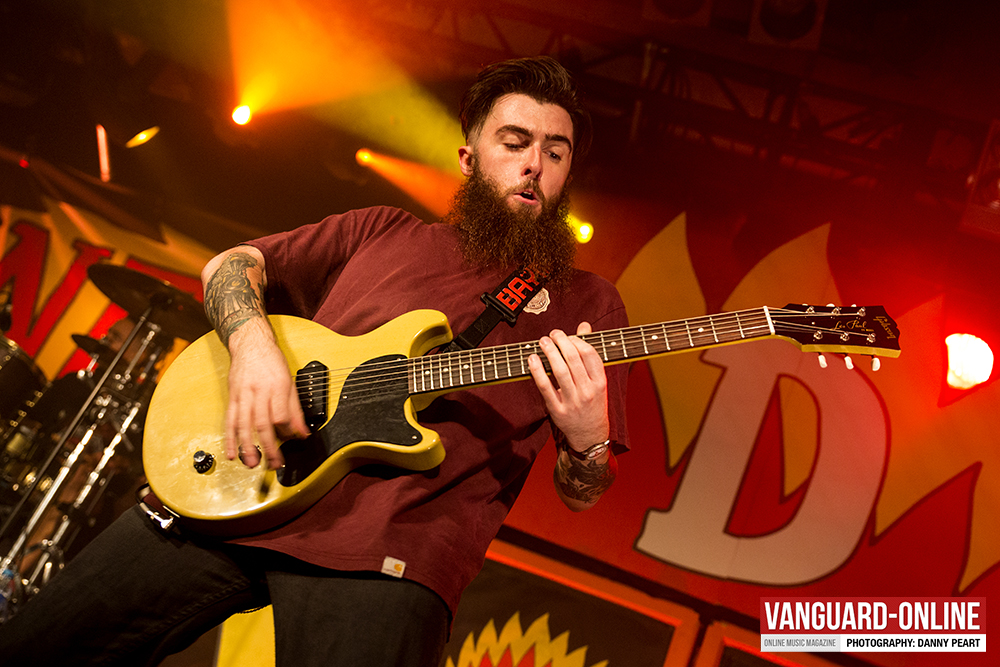 As you would expect the set list is crammed with songs from their hit album ‘Life’s Not Out To Get You’. The likes of the recent single ‘Serpents’ and the upbeat ‘Kali Ma’ are perfect for live shows, and arguably sound better live than on record. Mixed in are fan favorites from past albums, and even ‘What Did You Expect?’, the first song the band wrote together, sounds as good as the newer material proving Neck Deep know how to write a power pop-punk track with ease.

Deafening screams ring out for an encore, but when the crowd think their cries are being ignored, the joke chant of “Fuck Neck Deep mate, they’re shit!” seems to do the trick in pulling Ben Barlow back to the stage laughing along declaring; “well that was the best chant ever, that’s why I love Yorkshire!” Armed with his acoustic guitar alone, he plays through the stripped back ‘Head To The Ground’. Although he may look to be alone on stage, the crowd do everything to back him up by singing along the loudest they’ve been tonight, and it sounds amazing. 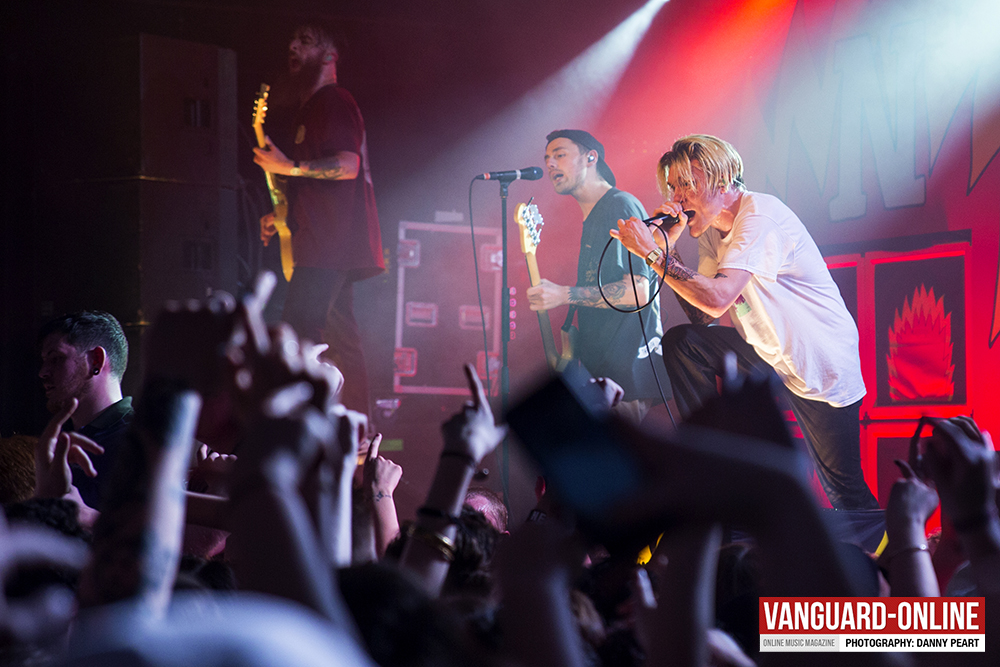 When you think you’ve seen it all, ‘December’ finds the full band back on the stage returning to business, and to liven the crowd back up they kick out a dozen beach balls to turn the room into one huge game of volleyball from the start to the finish of the song. But before they leave properly this time, there’s only one thing missing tonight, and it’s the fantastic ‘Can’t Kick Up The Roots’. For one final time everyone looses their minds to the epically bouncy and infectious chorus. Crowd surfers are giving the security one final tricky workout at the barrier, mosh pits are at the full and every single person in the room is giving it everything they have to make sure Leeds is remembered by Neck Deep as the best show of the tour.

A well-deserved 10/10 for Neck Deep after an explosive performance that gave Leeds everything and more than what was expected of them. It would seem that Neck Deep are well up there with the greats representing pop-punk for the UK! 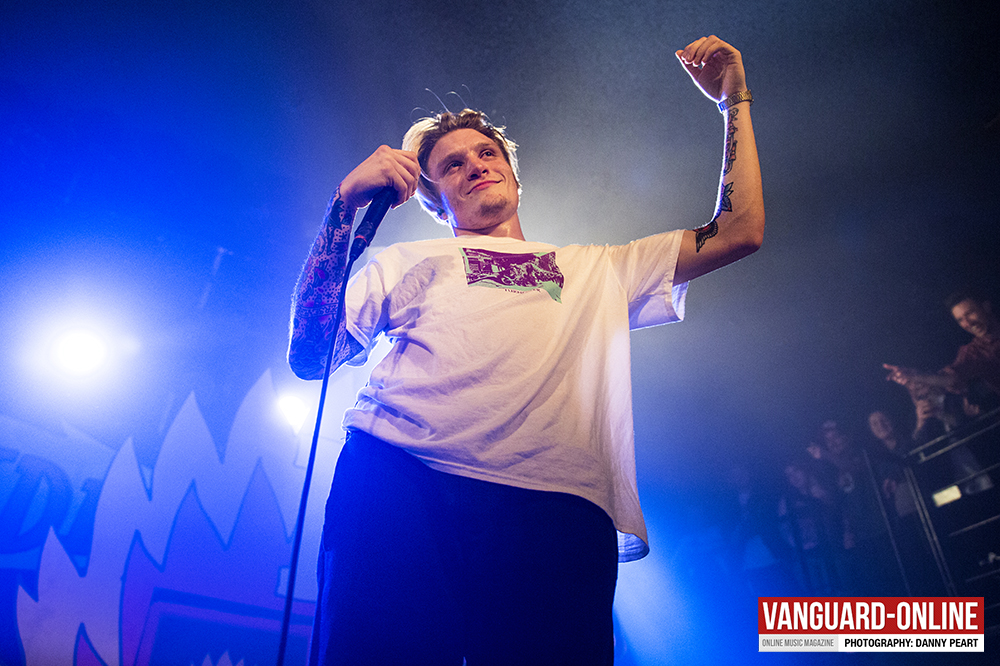