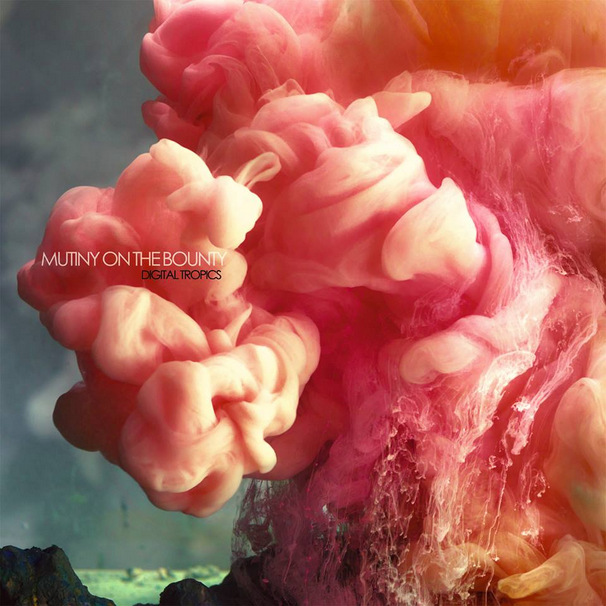 Quickly looking through my “first listen” notes to begin writing this review I see words like RnB, metal, pop, ambient, dance, lovely and unsettling. Sometimes within the same sentence.

Mutiny on the Bounty have a very “Post-rock” sound to them, but have managed to keep everything fresh by incorporating nuances from different styles and genres. In a genre plagued with over self-indulgence, Mutiny on the Bounty have traded complacency with inventiveness and ego for exciting song writing. The first song of the album [TELEKINESIS] is carried along with a growling bass while the guitars draw you closer in and the drums change and adapt to keep the song fresh and interesting. Before you know it five and a half minutes have gone by. No easy feat considering the majority of music on the radio today struggles to keep your attention for two minutes.

The band’s production matches their talent and song writing ability perfectly and while bits and pieces of production magic are used to enhance the songs here and there, they’ve still managed to create and album that feels like it will translate perfectly live without feeling like it’s missing anything, which is something that isn’t as common as it should be in the post-rock/post-core genre. Very crisp and dynamic, at times being floaty and ambient enough to be immersive and hypnotic and at others, heavy enough to hit you with impact while still sounding like the same song and band. Mutiny have perfected creating contrast without it being even slightly jarring. The guitar is simple and effective without being basic, the guitar touches multiple genres and sometimes becomes all at once while still holding the band’s own consistent sound and creates riffs much catchier than a lot of vocal melodies could dream of being. Meanwhile, the drums change and adapt while still holding down the rhythm and structure of the song without missing a beat (literally or figuratively).

Songs like dance AUTOMATION dance, and Mkl Jksn (the lead single from the album and a fitting tribute to Michael Jackson himself while still, very much so remaining a Mutiny on the Bounty song) have a definite bounce and groove to them that gets you nodding your head along if not breaking out in a full dance, much like the Mkl Jksn music video.

A personal favourite song of this album is Strobocop as it displays the band’s ability to tell a story with a song. [Spoilers ahead if you haven’t seen the 1987 Sci-Fi Action epic and plan on watching it soon. Also make sure you watch it and not the 2014 abomination, sorry, I mean remake] The song starts with a metallic, but mostly calm sounding riff with a slight hint of unease (Much like Murphy having a generally calm home life with his family but just about to start a job in a crime ridden Detroit Police Department). The song gets progressively more uneasy in tone as does the film when Murphy gets called in to the situation that ends up killing him. Half way through the song things calm down and get strange and metallic sounding before building back up in to a frantic outro section, again following the plot of the movie as Murphy gets rebuilt and turned in to a robot before getting revenge on the people who made him become Robocop. Intentional or not, the fact that someone can even fall that deep in to a song to make a story out of it speaks volumes for their song writing abilities.

The songs are multifunctional to say the least. If you want an album to hold your concentration, an album to sink in to while you sleep, background music while you do something else, an album to dance to, or an album to inspire you creatively then this is it.

It’s heavy enough for rock and metal fans without really being either one.

It’s progressive and inventive enough for prog fans without having to rely on time and tempo changes or sacrifice the feel and flow of a song.

It’s dancy and has enough movement and groove for pop and indie fans without being even slightly cheesy or clichéd.

In short, if you like music, breathing or enjoy the luxury of living;

The new album is due out on 26th May in UK (via Small Pond Records) and 21st May in the EU (via Redfield Records). The band have since announced that they will be releasing the new single and video on 23rd February 2015.