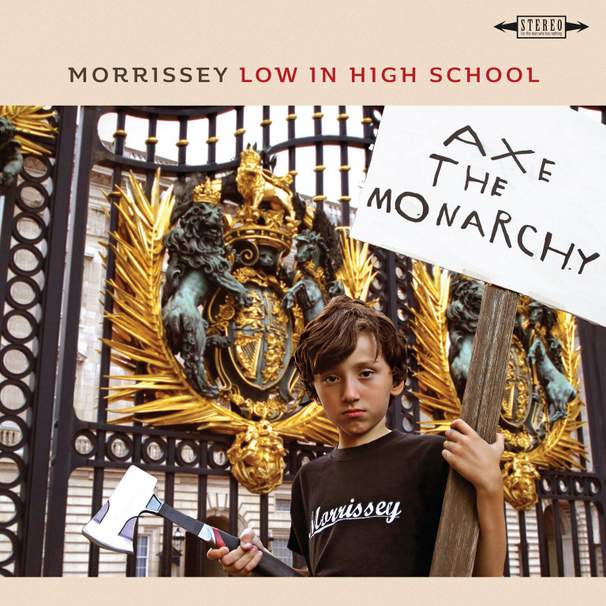 Nothing new here for Morrissey fans? A bucket list of stereotypes is ticked within the first five minutes contemplation of Morrissey’s new album. Title? Low in High School. Cover photo? A boy outside of Buckingham Palace with an axe. The word despise bounces out from the first lyric and sticks in the craw.

Is Morrissey now a caricature of himself?

Why does someone who lives in LA continue to be so obsessively morose about England?

Musically, Morrissey seems to be gently wandering into a forest full of progressive rock riffs and Ultravox style keyboards, looking up at the tress, down at the flowers and continuing to sing things which are of infinite interest to him, and of which the importance to others is of no importance to him.

There’s a whiff of Mike Oldfield in the air, who ageing rock stars have a lot to thank for, they lean back on him, they use him as a walking stick.

Talking of flowers, ‘Home is a Question Mark’ unfolds beautifully, to an orchestra of strings, with a great line about “if I came home would you lay your legs around my face to greet me”.

The beauty of Morrissey is how he is able to blatantly preach and get away with it and remain interesting, sometimes gripping. He is therefore an orator, a rhetorician, a Stephen Fry set to music. Some love him for it, everyone else tolerates it, no-one really sustains an attack on him for it, or gets irritated by it.

There is so much to like in the lyrics in ‘Spent the Day in Bed’ a treatise on idleness, that when trying to find a line to excite the reader I found it difficult not to want to quote the whole song. “I spent the day in bed” Morrissey sings, as if he was reenacting John and Yoko’s New York exhibition in the 1970s, as if the track was an epitaph to Tom Hogkinson, author of the Idler. I wonder if Morrissey has ever read Tom’s book?

Find the beauty in living, in being, in existing he seems to suggest. He contrasts this brilliantly with a scathing attack and a humanistic concern with our addiction to the news, and its damaging effect. More damaging now because it seems with increased accessibility we are becoming increasingly addicted to fear, blood and violence.

The progressive rock sound of Morrissey is a pottering around with instruments, a more structured level up from listening to a wind chime. Its vague music. Perhaps its therefore a nice compliment to Morrissey’s musings.

Morrissey I would imagine can pay the most accomplished session musicians to put their talents to producing any kind of sound. Morrissey goes all over the place from a grungey Pixies sound, to a kind of light tango affair on ‘The Girl from Tel Aviv Who Wouldn’t Kneel’. Israel is sung with the same level of ethereal beauty as Frankie Goes to Hollywood sings ‘The Power of Love’. Its pic’n’mix prog rock.

Morrissey may too easily be seduced by iconoclasts, and in particularly too easily seduced by people who affect iconoclasm representing seedy and far from iconoclastic interests. He may be too easily seduced by a romanticised and racist white version of England that only ever existed in Carry On Films. But despite all of this, and no matter that may be enough to avoid him on ethical grounds, he has a brilliant talent. Furthermore, there is always a tension in Morrissey’s music. Nationalist? Some think so, but then he’ll entitle his track ‘Home is a question mark’ a quite brilliant riposte to anyone claiming a sacred birthright to a land based on ethnicity, if that’s how its meant (on a second and third listen its clear that sadly its not).

Sticking in the craw, you see, that’s what it seems to be about. In everyone’s craw.

For every moment that he seems to go beyond the pale, he strikes a home run in the stadium of truth. He is your George Galloway, he is your (gulp) Nigel Farage, but he is a musical God so he gets away with it. It’s such a joy and perhaps a guilty pleasure to review, to delve into and luxuriate in a Morrissey album. There is so much to listen to, it gives succour, there’s so much to feel renewed by, but then so much to feel disturbed by. He enthuses the iconoclast in all of us, for better or worse.

Morrissey releases ‘Low in High-School’ on the 17th November 2017