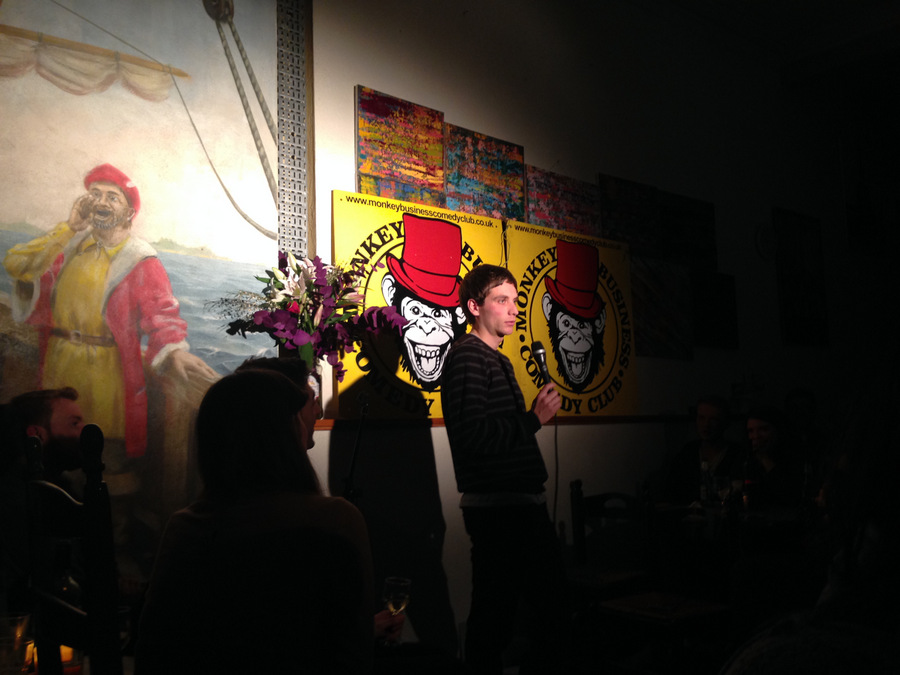 I come out of Kentish Town tube cross over the road and I’m at the TOLLI Italian cafe bar in Kentish Town, it’s Saturday night, the cafe’s whole front including windows and door are plastered in monkey business posters. I enter…

…a bright light shines in my eye, it’s the stage light, I’m almost on the stage and I’ve only just walking a few steps into the room. I feel like I’ve entered a 1920’s speakeasy, or possibly a squat.

Either way, there has got to be something illegal going on, but no, its just the (temporary) home of Monkey Business Comedy Clubs Saturday night show.

After being greeted by the man in charge and Mc: Martin Besserman, I was a bit early so spent some time looking around the cafe.

TOLLI Italian cafe is pretty much one large room with a balcony above a counter where the owners sell food and drinks. The room’s walls are decorated with various shaped chalk board menu’s, quirky art pieces and murals.

On the ceiling is a recreation of Michelangelo’s fresco ‘The Creation of Adam’.

As we all know too well; the original piece famously adorns the Sistine Chapel ceiling, however the owner of this cafe seems to have run out of paint and just done that bit of it where god’s hand reaches to touch adams right in the middle of the ceiling.

Now lets get down to business, the toilets.

Now the ceiling of the stairs going down to the toilets and the toilets themselves are decked in a billowing foamy material which makes visiting the toilet’s quite the adventure, especially for anyone who’s drunk or on drugs, I enjoyed them quite a bit in mainly fairly sober state.

The gig started with Martin (the MC) climbing over an audience member to abruptly unplug the cable supplying the music, this along with the afore mentioned decor and general ‘Mise en scène’; signalled to me that this might not be quite the polished comedy gig one might have expected.

That being said, all these qualities made for a very friendly relaxed atmosphere, a pretty cool popup gig one might say.

The night featured six comedians doing their standup, plus a comic magician.

The biggest draw on the bill was Sara Pascoe, who didn’t fail to impress.

As a red blooded male heterosexual man; you’d be forgiven for saying something along the lines of ‘After watching her I have decided to become a feminist!, but not a feminist in a bad way but in a new good way, in a Sara Pascoe way.’.

This would probably be an offensive thing to say, so maybe don’t say it out loud.

She commanded the attention of the room, drawing us into her clever comedy. Pascoe enthralled with hilarity all the different types of people at the gig; from beer swilling ‘stag-do’ blokes on the balcony, to the very cool nonchalant reviewer guy hanging out by the potted plants.

Another of my favourite’s on stage that night was Daniel Simonsen, replacing an act who couldn’t make it.

I like this guy alot, his alternative style is right up my tree, Daniel is foreign and yet doesn’t let that hold him back, in fact he seems to be funnier than anyone. Scandinavians have the ability to come at the world from an oblique angle, and he masterfully dragged the gig into his slow paced, low energy surreal world, turning anything he said into a possible laughter point.

During the night two large groups were late, joining the gig a handful at a time throughout the night. One man remarked as he entered ‘’most obscure bar in the world’’, presumably referring to the difficulty in finding the venue and the excuse for their lateness.

They would then have to walk directly across the ‘stage area’ meaning the comics would have to deal with these interruptions, most of them did so very well.

Between acts MC and host Besserman flirted brazenly picking on some of his audience members, at one point he even pointed me out to the room as a reviewer from a publication that he had never heard of. What a brave tactic, to embarrass a man who is reviewing your show. A calculated move I’m sure. Still I am a professional and will in no way let that affect my review of him. Theres no need to be Immature now is there…

…Martin as an MC has the stage presence of a ghost, and remember guys, ghosts don’t exist.

Still he must have a sense of humour because after the show he asked me if he would be getting a good review.

Ok lets I’ll be mature again, he did put on a good show, regardless of some of his interesting decisions while MCing.

Wether he realises it or not, as a quirky popup comedy venue TOLLI is a very cool place for laughter to happen.