“I come alive in the dancehall” sings Natalia Tena in Dancing With The Dead. Too right. Molotov Jukebox are all about the dance. You know what the great thing about a band with a reputation for a good time is? People who want to have a good time come along. It’s a self-fulfilling prophecy and the audience tonight are a lot more lively than your average crowd. 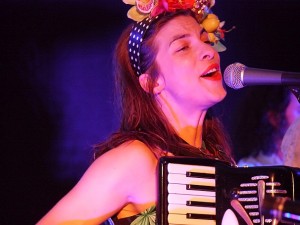 What’s more, the band make an effort. This is a show. They’ve learnt some facts about Leeds, they have prizes for best dressed and best dancer, Natalia gets all worked up along the lines of “it’s Tuesday and you’ve all come out. Wow! Thanks for coming! We’re really glad you’re here”. I paraphrase but you get the gist….. 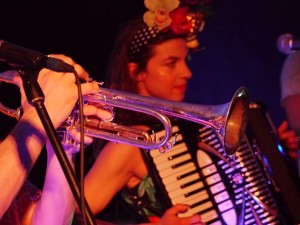 Molotov Jukebox make a good pop album (see Exhibit A – new album, Tropical Gypsy) but their real milieu is the stage. See, their songs don’t stand out, nice slice-of-life story songs though they are. Relatively inconsequential tales about things like self-doubt, losing a lad’s phone number and clubbing remind me of songs by softy indie band, Athlete, and hippies like The String Cheese Incident. But, like a festival band that you stumble on in an insanely hot tent, Molotov Jukebox keep it moving and the beat and punch becomes it all. Frequent intense trumpet punctuates the  proceedings, while the band takes regular brief but frequent solos. The bass is solid and dancing, the drums are exceptional and the heart of the beast, touching on higher sounds like the clave as much as the kick. There is a guitar but he mostly sticks to rhythm, while the Latino feel is to the fore. 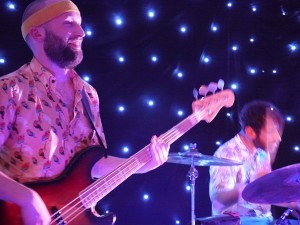 There’s a trick to the Latin thing. Make it real and your audience might get confused feet; Molotov Jukebox keep it nailed to bass beats we recognise, while dressing up the music with multi-beat frills. What goes down REALLY well is reggae / ska switcheroos, which send the floor into a frenzy, as does Gypsy Funeral, closer of the new album, which sets a furious pace on stage as well as on the floor: “Dance, dance, dance, I can’t breathe”. At times this band is a well-behaved Gogol Bordello and somehow, the punchier the beat, the punchier the lyric and the gig blasts along nicely. A bit more variation in pace or intensity would colour the hour and a half in tastier shades of light and dark but you can’t knock them for trying for the knockout. Bass, fiddle, guitar, drums and all work it hard. Up front and very much the figurehead is Natalia, with her splendid headdress, footwork and unique role as singer / accordionist, though occasionally the trumpeter’s eyebrows upstage her expressivity. 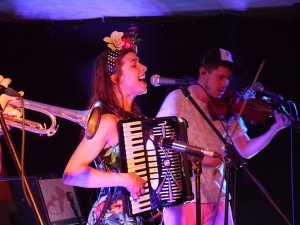 The band build up to a sweet Pineapple Girl (opener of the new album) and a fast/ slow ska piece. After a brief pause for the traditional encore recall, Natalia sings an almost-solo Nina (as in the Spanish for girl) with guitar, a sweet ballad in Spanish before sending us home sweaty from more up-tempo dance. 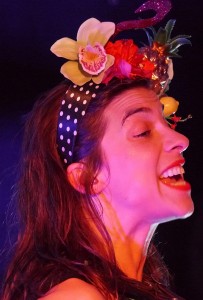