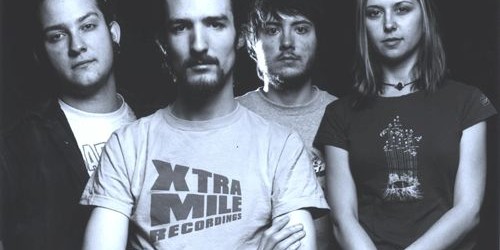 It’s been a long time in the making, but Million Dead are finally set to release their second and final album Harmony, No Harmony on vinyl this August. Marking the ten year anniversary of the LP, Xtra Mile Recordings are producing transparent yellow records in a newly redesigned gatefold sleeve, alongside t-shirts featuring the album’s trademark burning match motif.

The release is sure to welcome fans both old and new back into the angsty world of Million Dead  – long before the days of Mongol Horde and Future of the Left. Showcasing a more pensive side to the band after debut A Song to Ruin, Harmony No Harmony is Million Dead perhaps at its best. Unafraid to experiment both lyrically and musically, the album straddles the barrier between post-hardcore and the contemplative alt-rock so reminiscent of the early noughties. This is a must have for any Frank Turner fan wanting to know where it all began.

If you can’t wait until then to embrace the nostalgia, check out the band’s oddly moving video for Living the Dream, following the tale of a glam rock band re-discovering themselves after the glitter and make-up lose their appeal.

The LP (with optional tee) is available to pre-order from Xtra Mile and Banquet Records.

50 NEW NAMES COME CRASHING INTO LEEDS 2019 INCLUDING ROYAL BLOOD, CHARLI XCX, YOU ME AT SIX, LIL UZI VERT AND MORE!