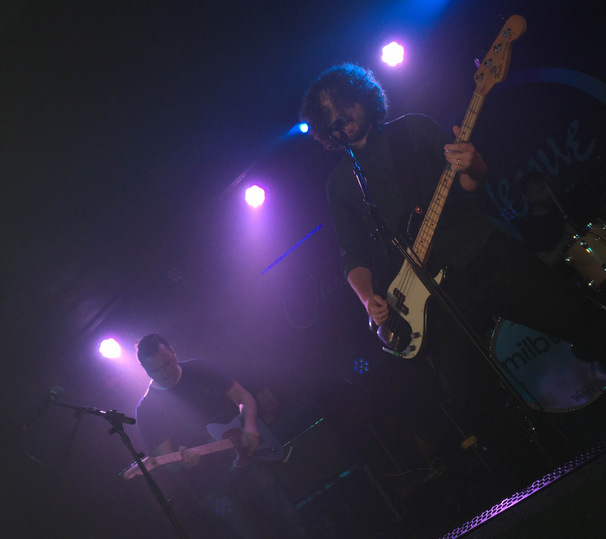 Milburn are an indie rock band. Their sound is influenced by the Artic Monkeys, Reverend and the Makers, Shed Seven, and, dare I say it, The Jam.

They got to know each other from playing football together and formed in 2001. After seven years they announced their split in 2008 playing their final gig at the Sheffield Carling Academy.

But now they’re back and tickets for their Oran Mor gig in Glasgow were sold out in less than four minutes.

Before the show started fans were taking selfies in the reflection of Milburn’s big bass drum.

After The Begbies provided the warm up the room was full of “Miiiilburn” chants till the band came on stage.

Joe Carnall was dressed smartly in a dark green shirt. He was bouncing back and forward in a chillaxed manner, getting into the swing whilst playing their intro. He heads his respect to all and the “Miiiiiilburn” chants restart.

Straight into “Well Well Well” and the “da da da da da” chants begin. There’s no hesitation, over 550 people, a mixture of young to middle aged, sing every word.

Joe Carnall was pleased with the fans enthusiasm. He smiled down on to his adoring fan base. Joe Green was pounding away on his drum kit with his head down moving to the beat.

Milburn played riffs then slickly segued into the next song. The crowd were with them all the way knowing what was coming next and breaking out into song.

The crowd were bouncing that much there could have been fears of the floor caving in, thankfully the gig was in the basement of Oran Mor.

It was hot. Tom kept wiping the sweat away. I felt like I was in a sauna. I went with straight hair and sported the curly frizz on the way home.

They play “Summertime”. It has lots of stop and starting guitar riffs, the chorus has a Mamas And Papas feel to it. The song seems to be about regret, the depression bought about by winter, but then the renewal and optimism that comes with summer.

“Next song is for all the birds in the peripheral n all you guys with your girlfriends there in the middle!” Lucy Lovemenot blasts out. Joe Carnall adds “We’ve been looking forward to coming to Glasgow. Especially to see what happens when we play tunes like this next one”. “What About Next Time” comes on, the crowd take on the chorus and Joe shouts over to his brother “they’re good”.

Next up is “Lo And Behold” and then “What Will You Do( When The Money Goes)?” Joe Carnall shouts “Glasgow let’s av yie!”. The chords to “What Will You Do” are different to their usual music. There’s a drone in the background of this track that works well. The track seems to be about the kind of girls only interested in men with money and success. 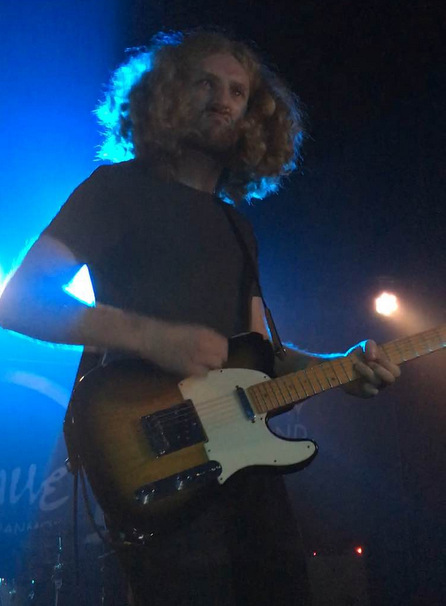 Joe Carnall explains the need for the band to move on “We could come back and just play old tunes, and old tunes we will do! But we’re proper musicians and we write proper songs and we wrote a couple of new ones and we think we should play them, shall we carry on? Or else we will just fuck off again, know what I mean? This is a new one called Forming Of The Fate.” Well “Forming of the Fate” might be a new track but by hell the audience still know it, word for word. Its less alternative and less produced than their old tunes,the sounds really take care of themselves and flow.

Joe Carnall lets them know where else thy are playing and to go see them. He then quips “This is for you lot that are probably gonna fall out wi your girlfriends later on” and plays “Storm In A Teacup”. Towards the end of the track he invites the audience to finish the song off. Guitars are sat down to scream out controlled feedback and Louis walks off last clapping. 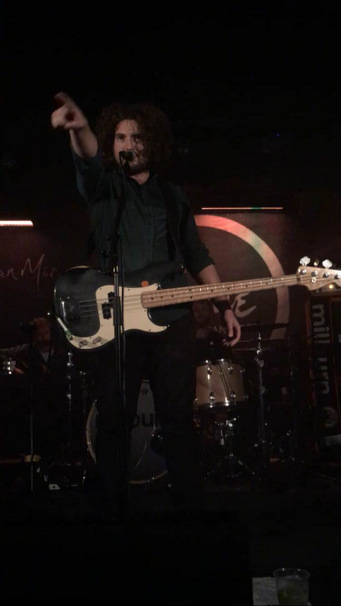 Responding to the demands of the crowd Joe Carnall, alone, returns, holding an acoustic guitar. He shouts out “Glasgow we are very bad for a Wednesday night I tell ya. Shall we Roll Out The Barrel or wot?” The crowd shout “Yeeeah!”

There are posters on the walls banning drink-throwing and crowd-surfing. Not that it stops anyone during the encore. Once the last song “What You Could Have Won” kicks in then so does the crowd, encouraged by Louis.

The bouncers are pretty strict though, getting people off each others’ shoulders. At some point Joe tries to discourage the bouncers. My head gets caught between a crowd surfer’s legs and as the bouncer tries to pull him down my face ends up being smashed against the barrier! Do I care? Hell no! I bounce with the crowd to the end.

As it happens I have a friend with me who waits till we are inside to explain she has a fear of crowds! By the end, the gig seems to have solved her phobia! Front row bouncing works wonders for the soul.

“Glasgow we’ve only got two songs left now” announces Joe, and he holds his Milburn scarf up. The band come back on and he gets his electric again and says “We save this time for very special occasions!” They play “17”, slower paced then fast, then slow and then a heavy rock out. Its a song about the days of being young, going out on the razz and picking up chicks, and how things feel different as you get older. 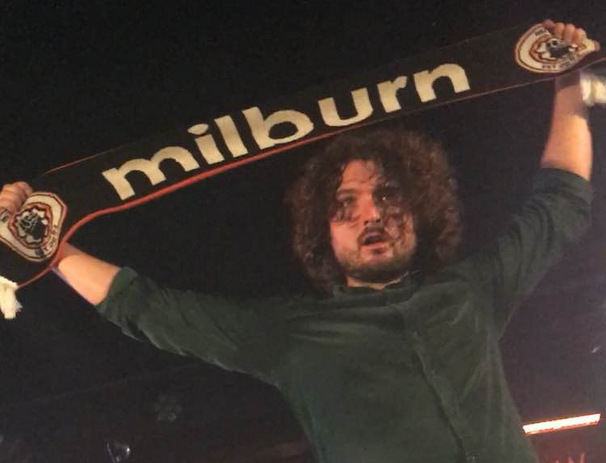 The fans leave on a high and very emotional in the hope that Milburn will be back for good.

Milburn! Please hear the cries…..stay! Your music is amazing and you’re far too creative to hide away!