“It’s always strange when I play in Leeds” says Michael Chapman, who, he explains is a Hunslet lad, “still, so long as there isn’t a fight”. And there isn’t – the substantial audience sits in an appreciative hush. Opening with an instrumental, his intricate and expressive style is at the forefront and his fingers slowly warm to full expressiveness. Michael knows why the crowd is here and follows with another “instrumental without words – my mother preferred them, didn’t like my voice”. This one, Candle Lake, he tells us, is the product of getting bored and sitting against a tree playing his guitar. It’s more than clear he’s been doing just that for fifty years and the technique he draws on is wide, with the guitar having as much to say as any words. Those words, in his later songs, are sparse and simple. Songs like Sometimes You Just Drive are polished miniatures. 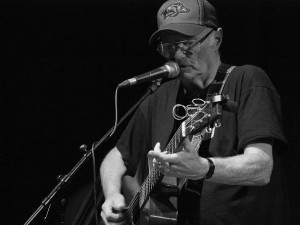 If you asked me how long the set was, I’d have said an hour but, so hypnotic was it through the lengthy pieces, that it was actually over an hour and a half. Words are scratched out, setting a scene, then the music extends and pulls the theme on with the odd jaw-dropping bit of playing. A bare three songs in he plays most people’s favourite off his recent 50 album, The Mallard. It’s a metaphor of course but he tells us of seeing it come through Hunslet just after the second world war and the symbolic value it freighted to the crowd waiting to watch it pass. 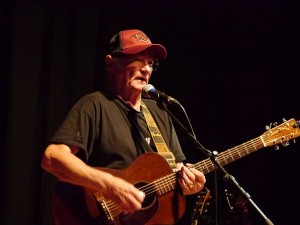 Old and new songs are mixed through the set, with murmurs of appreciation for the most favoured. Personally, I like the new ones, sparse and full of road weariness, delivered in a hoarse mumble. Switching from these many pictures of America to between-song chat, Chapman becomes your older uncle from Leeds. In a baggy T-shirt and baseball cap, he tells stories like he was recounting tales to a family gathering. Except his tales are about things like Lucinda Williams playing his song, rather than the adventures of his dog. 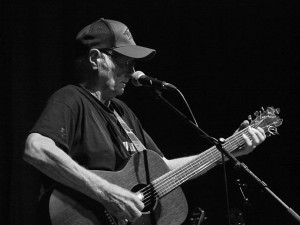 Somehow understated, yet with the flashest of technique, Michael Chapman kept an audience spellbound tonight with just voice and guitar, exemplifying why he still working after fifty years in the business. A master of the guitar and a consummate sketcher of scenes with words, an audience with Michael Chapman is a chance to marvel at what humans can do. Never a nostalgia act, the new work keeps coming and style developing; tonight was a warm reminder of why he is held in such regard and affection.

We took a shine to Michael’s last album here: http://www.vanguard-online.co.uk/michael-chapman-50-is-a-reminder-of-musical-genius-that-never-went-away/