It’s an affecting performance from an intense artist. I’ve seen Micah P Hinson before and he is so far into himself that I wondered if it is an act – no-one’s that weird, are they?

Tonight I changed my mind. 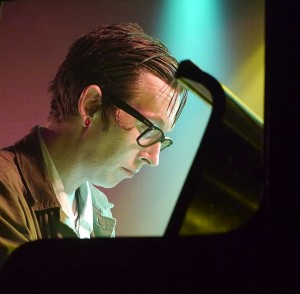 Deeply wrapped in his latest project, The Holy Strangers, Micah wanted to share it and tell us all about it. So much so, that the whole ninety-minute set is devoted to a one hour album. It’s not a run-through of the album – he’s tweaked the many instrumentals with lyrics from previous songs and added some songs he couldn’t fit on the album when the record company wouldn’t let him put out a two and a half hour set. 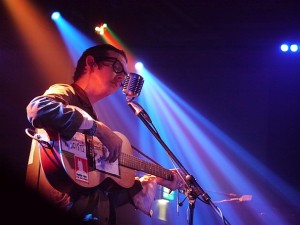 He fills the ninety minutes with slow and soulful renditions of his songs and strange chats about his work, thoughts and life. Early on he tells us people think he’s a strange m-f but is at pains to tell us he’s not drunk. He certainly appears to have an altered consciousness but some people are blessed with that and some people burn substances into their soul young, as his bio tells us he did. He’s slow, gentle, open, Brylcreemed, big spectacled and skinny with an uncanny geekish knowledge of the work of The Carter family. Introducing ‘Lover’s Lane’, he tells us how the song was stolen by Alvin Carter and even where it was recorded. His voice warbles with painful authenticity as he sings and both guitar and piano solos are understated, expressive and tight. 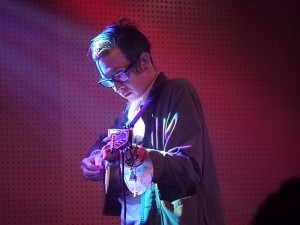 Fond of strange noises, his pedals bring us heavy vocal echo at times and his accompanist, Hollywood Henry Da Massa, hides behind old artefacts to bring us treated harmonica sounds and other effects. The result is an almost-drone, leaving the guitar or piano high and clear. A discourse on what it’s like being a Chickasaw Indian leads into his philosophy that “there are more interesting things going on in the past”. There are interesting things going on in Hinson’s head right now; his ‘Oh, Spaceman’ is a sidereal simile for the birth of a child and he has constructed the set to be even sparser than the already dry-as-a-bone album. Standing awkwardly but honestly, singing songs of melancholy, the performer is surprised by a “Woohoo” from the otherwise respectful crowd. “I’m glad you’re enjoying yourself. That’s what I feel like on the inside”. He smiles. 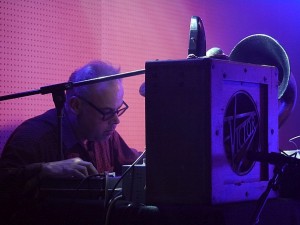 His reading of Micah Book One from the Old Testament atop a cacophony of effects is powerfully strange and more than compensates for singing Kumbaya towards the end. The bum note on the album, renamed as ‘Come By Here’, it’s a strange choice but here he buries it in squalls of distortion/echo/fuzz guitar pile-up, like Neil Young’s soundtrack for Jim Jarmusch’s Dead Man, and thus redeems the performance. 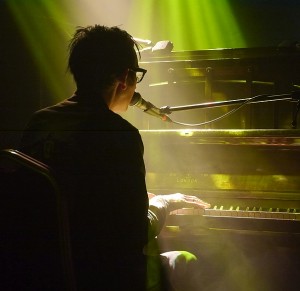 Seeing us off with a slow, gentle conciliatory advice-giving ballad, the crowd is left soothed and oddly invigorated by this thoughtful performance.