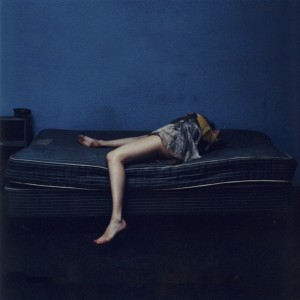 Marika Hackman’s debut album simultaneously cements her place in the folk music scene whilst locating her outside of it. Parallels are constantly being drawn between Hackman and fellow folk goddess Laura Marling – and with good reason. Both ladies dodge the sickly-sweetness that seems to dominate the folk/singer-songwriter genre, but Hackman introduces a new element to her song-writing and takes this further. There’s a dark current to this album, an electric shadow in every song that evades labelling.

Hackman’s ‘no fuss’ voice creeps over simple, but brooding melodies. There’s a tinge of the melancholic to this album, bolstered and deepened by the very subtle use of electronic instrumentation under acoustic guitar. It’s sparse and devastatingly beautiful, adding a unique twist to Hackman’s talented song-writing – one that unsettles as much as it soothes.  Opening track ‘Drown’ has an airy magical quality, offset by layered textures and suffocating lyrics like ‘I’d choke on you if I could / Maybe I will’  – it’s a mood continued throughout. Listening to this album is like a walk through a mossy forest; everything feels fresh and green until you glance to the side and see the foliage getting deeper and denser and darker – and realise you’re a little too far away from home.

Stand out tracks include ‘Open Wide’, which seems to shirk the pretence of niceties altogether. Dark from the beginning, a sinister guitar riff makes this track memorable. ‘Animal Fear’, sporting a video where Hackman turns into some sort of werewolf and rips the head off Marling (which you know you want to see) is different altogether, more upbeat but deceptively so, as Hackman sings of weeping wounds and blood soaking through. ‘Monday Afternoon’ is perhaps the closest to folk you get – flute and string arrangements woven through to make a rootsy ode to a dead girl and ‘the sickly sweet of my rotting skin.‘

This is an album of grotesque beauty, of evocative lyricism. Enticing and foreboding; an album of contrasts. Folk and distorted guitars merge and swirl under Hackman’s enchanting voice, working in close harmony. Hackman invites us into her imagination with these songs, and for 40 minutes as the record spins, it’s a twisted place to reside.

We Slept At Last is out now on iTunes, CD and Vinyl through Dirty Hit Records.

Marika Hackman is set to tour the UK in March and April. The dates are as follows:

Tickets can be bought from www.MarikaHackman.com