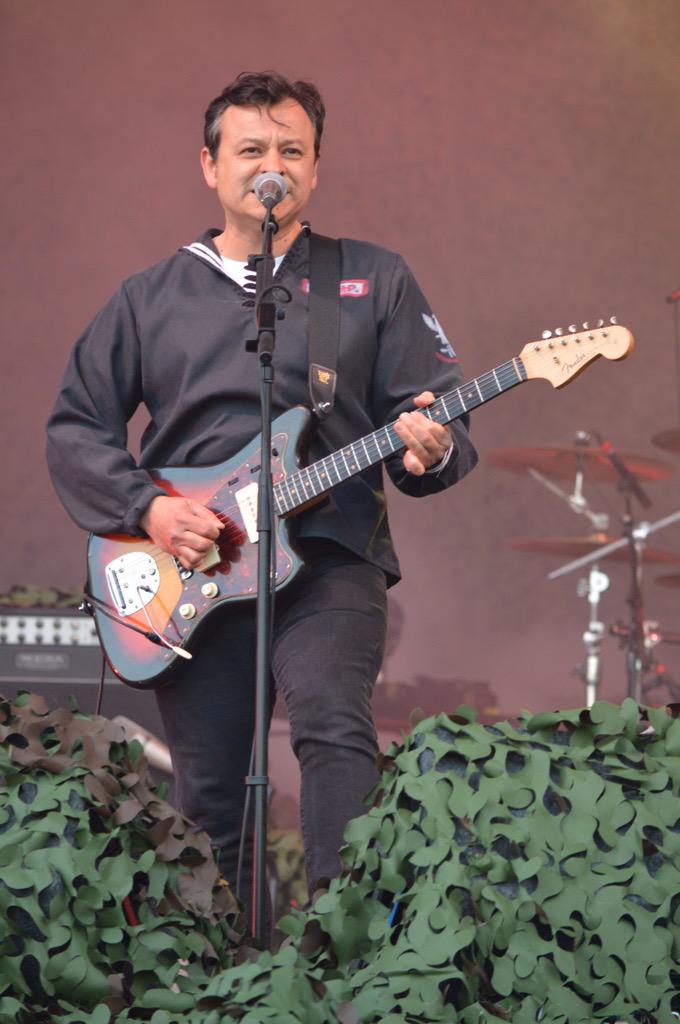 The last time I saw the Manics in Cardiff was fifteen-and-a-half years ago, at the huge, looming, then-new Millennium Stadium to ring in the new century. In 2015, on this surreal Friday night in the Welsh capital, it was teenybopper leviathans One Direction at the 60,000 capacity stadium, opening their UK tour as the Manics closed theirs in the more refined setting of the castle. For the record, although we could see the stadium from the castle grounds, no, we could not hear the Directioners’ screams. Manic Street Preachers are far too loud for that.

Cardiff Castle is a beautiful venue. Inside the Victorian crenellated walls is a mock-Gothic mansion, built by the wealthy Bute family, and, watching over proceedings from its motte, the original Norman keep. There was more than enough space for the 10,000 strong sold out crowd, and real ale in the June sunshine gave a relaxed feeling to the evening.

This was the gig’s only failing – as frontman James Dean Bradfield explained as he introduced The Holy Bible, “[It’s] not a summer garden party-party album”. And it isn’t. It was incongruous to see a beach ball bouncing around a crowd that was singing “Hurt myself to get pain out”. In the open air the crowd noise didn’t carry as well as indoors, and some of the more casual fans may have used the time to stock up on beer before the bar got busy.

The atmosphere at times felt flat compared to the febrile claustrophobia of previous gigs on the tour, but The Holy Bible still shone darkly in the setting sun, drummer Seam Moore driving each song with an insistent, military rhythm.

During the study on the death penalty (again, not really summer garden party stuff), Archives of Pain, Bradfield’s guitar failed during the solo. Bassist Nicky Wire sympathised/taunted “he likes showing off during that one”. Bradfield was showing off throughout – never happier than in the midst of a big solo. In spite of the strange surroundings and a rendition of Faster which was, well, slower, it was a well-played performance of the 1994 classic album.

After a break, Bradfield returned to the stage with the Vulcan string quartet for a beautiful acoustic version of The Everlasting before the rest of the band re-joined for the more crowd-pleasing second half. The hits were here – Motorcycle Emptiness, You Stole the Sun from my Heart – but also a few album tracks for the hardcore – Condemned to Rock ‘n’ Roll, Golden Platitudes and the endearingly silly pop-rap Sex, Power Love and Money (a personal favourite of mine).

In darkness now, with the castle lit and stars glimmering in the sky, Bradfield treats us to a Hendrix-esque Hen Wlad Fy Nhadau, the Welsh National Anthem. With the crowd turned choir, it’s an emotional moment (Wire uses the time to change into a very, very short leopard print skirt. At 46 he’s still got the legs for it) before they break into You Love Us.

As is traditional, they finish with their best known (and in my opinion best) track, A Design for Life. Fireworks lit up the sky and the crowd sang along.

As Bradfield and Wire struggled to smash up a bass, and the crowd filtered out to join the harried parents and tweens emptying out of the stadium, we knew it had been a memorable night. And the over-tired eight year olds in brand-new 1D T-shirts might disagree, but I think it was at the Castle where we danced all night to the best song ever. 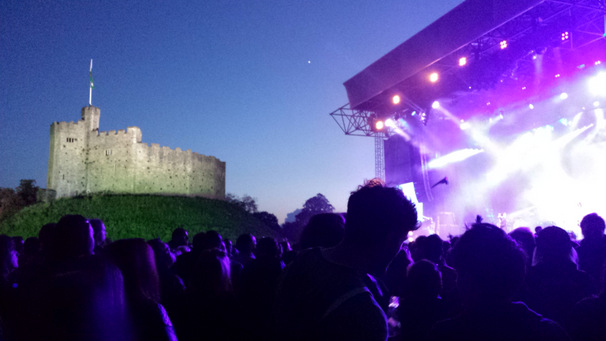