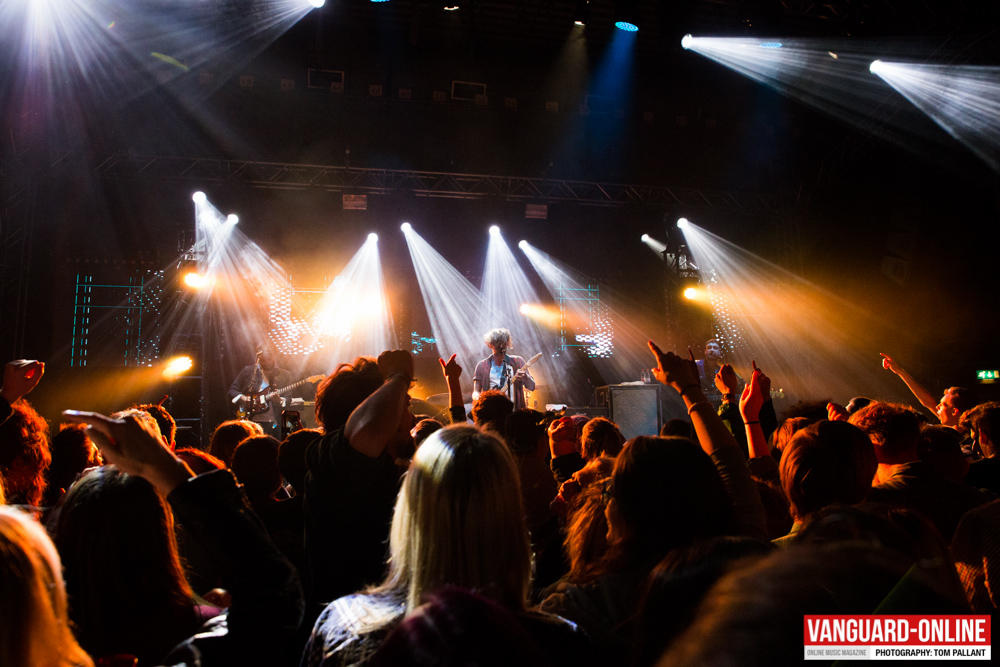 The Budweiser Live Project is in its first year this year, offering fans free tickets to some go the biggest acts from the UK, and this year has been no different with the likes of The Wombats, Coasts, and Krept & Konan. But tonight it’s all about Twin Atlantic. The Old Granada Studios are the setting for what it set to be a beer fuelled night of massive rock anthems.

Starting off the night was a slightly lacklustre set by a local band who failed to mention their name when they entered the stage, and then failed to introduce any songs leaving everyone slightly confused as to who they were. Nevertheless some of the nameless tracks were truly listenable with nice melodic guitar lines that play off each other, and give a hint of inspiration from The Smiths with the extensive use of chorus. The majority of their set could have easily been the soundtrack to a short film but lacked any real excitement throughout. 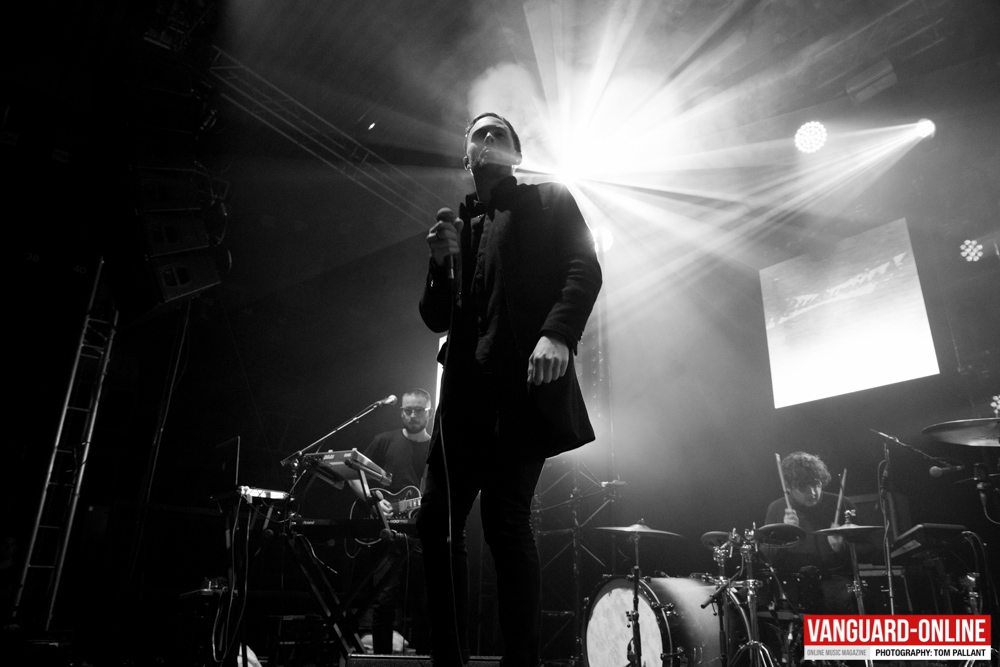 Dive In (7) were the next band to grace the stage, and after a slight technical hiccup to do with their backing track they plunged into ‘Change In The Weather’ with synth pop electric energy. The vocal performance right from the outset is outstanding being complemented excellently by the over processed vocals on the backing tracks. It’s particularly impressive due to the fact that the Glastonbury band’s frontman refuses to stop moving around, covering almost the entire stage within the first 3.5 minutes.

If you can imagine the lovechild of MGMT and CHVRCHES, then that’s something similar to what this Manchester crowd are being treated to this evening to open the show. Bursting into the foot twitching ‘Can’t Hold Me Down’ the entire crowd begins the every popular “I’m enjoying the support act so I’m going to bob my head” and who can blame them with the infectious melodies of the synth poppers.

In timeless fashion when a slower song approaches, the request for everyone to get their phones & lighters out inevitably came, although with a little added extra as the pint glasses distributed from the bar glows casting a red tinge across the cavernous studios.

Possibly their most recognisable song closing their energetic set, ‘Let Go’ opens with syncopated piano riff that instantly engines itself into the head of the listener. Again the head bobbing starts and finally the crowd starts to loosen up and dance along to Made In Chelsea-esque tune. 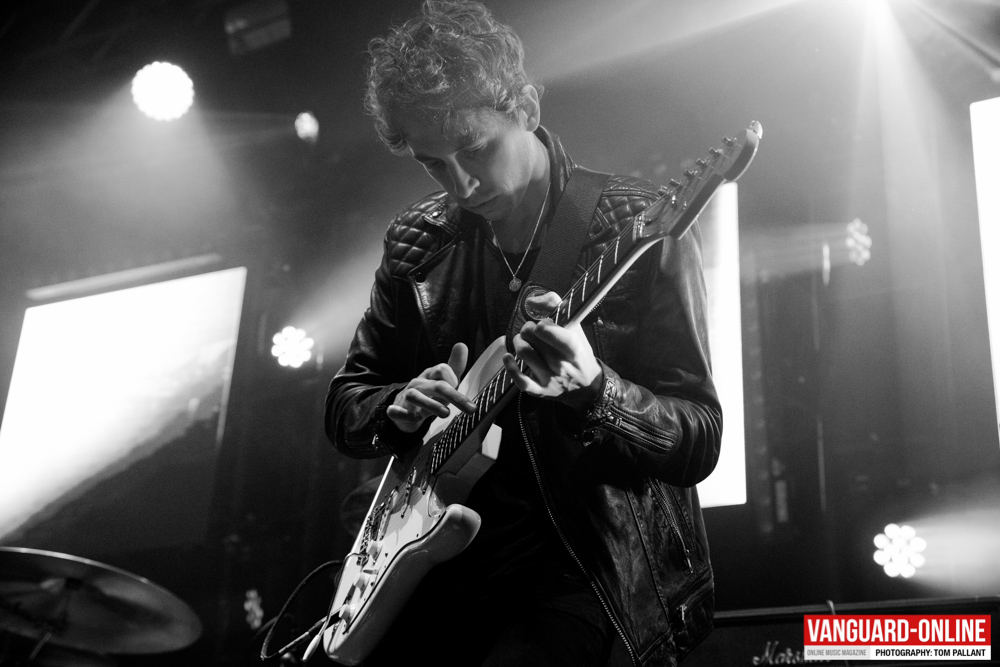 After a half an hour break that seems like an eternity for this gradually intoxicating crowd, Twin Atlantic (9) finally emerge from backstage, with frontman Sam McTrusty bearing his trademark Rains jacket. With no messing around, they explode into ‘Edit Me’ with bounding ferocity and cues the crowd to start bouncing, causing what is sure to be the first of many mosh pits this evening. The breakdown in this track warms the Manchester audience up for the amount of unaccompanied singing they’ll be doing tonight. “Manchester how the **** are you doing?” exclaims McTrusty which is met by what can only be described as a collective “Ahhh!” as ‘Fall Into The Party’ kicks off hardly letting everyone catch their breath. 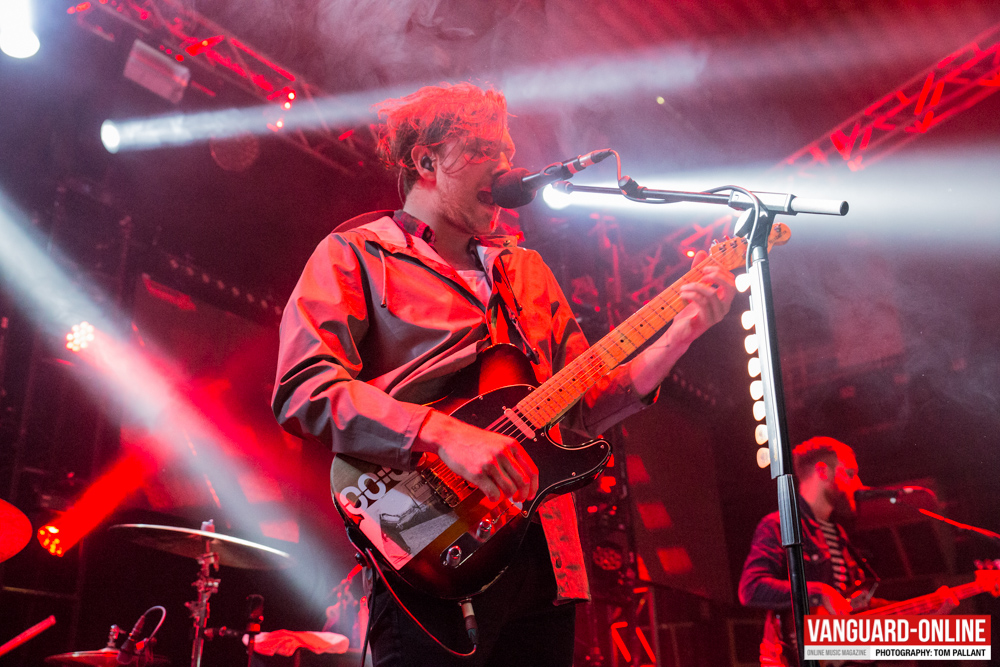 After an odd start to ‘The Ghost Of Eddie’ seemingly (or what I’m hoping) was played fast and wrong on purpose, showing even after the huge success of their latest release ‘Great Divide’ last summer, they still love playing songs from their previous record ‘Free’ in 2011. After the aggression of the first three songs, ‘Hold On’ brings a more pop fuelled vibe and yet again causes the venue to erupt in screams of the title name throughout the choruses. It’s always refreshing to hear a vocalist do something a little different when performing live and McTrusty certainly enjoys doing this exploring the very tops of his range in changing the melody lines.

Break time’s over when a song that certainly needs no introduction and judging by the audience they have become all to familiar with the 7-beat guitar into. ‘Make A Beast Of Myself’, another crowd favourite from Free only heightens the attempt at the Scottish accent by everyone present. Somehow as if the current levels weren’t enough, they somehow kick the middle 8 into a higher gear creating another wave of ecstasy, smashing into the last chorus. 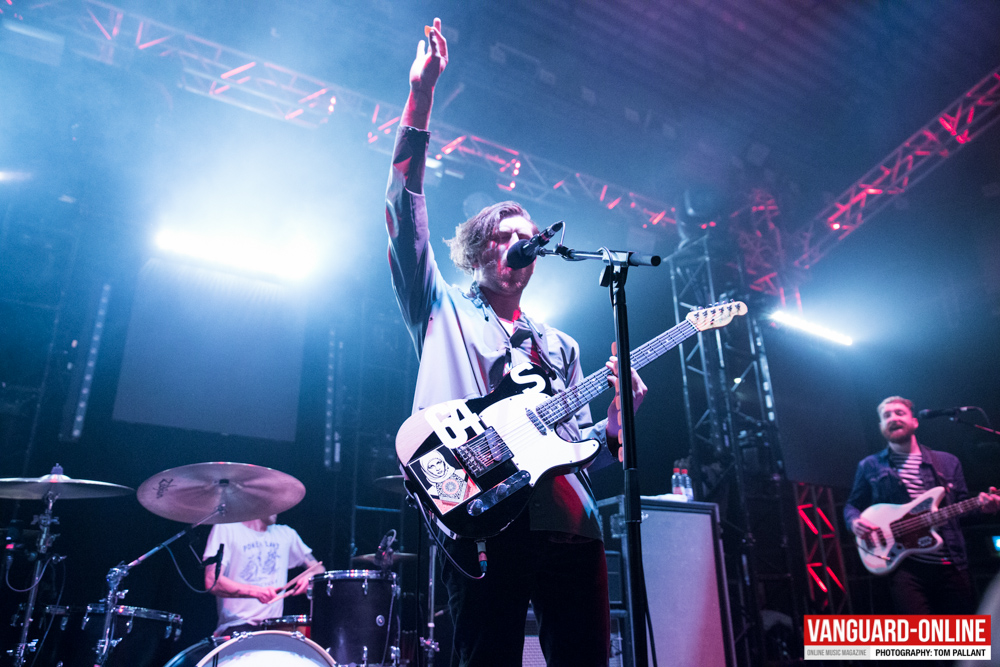 Yet another song that needs no introduction begins with the instantly recognisable drum beat as McTrusty exclaims “Right Manchester I want to see you moving in this one!” and do they accept the invitation, hell yes! ‘I Am An Animal’. As we reach the middle 8, McTrusty shouts “I want to see everyone sat on the floor, RIGHT NOW!”, so a slightly reluctant audience gradually shuffle to the floor trying their best to avoid the many puddles of Budweiser spilt during the set so far. “I don’t even need to tell you what I want next..” he adds as he sings “wake up everyone…” echoed by the adoring fans as carnage erupts as bodies are flung around and over the barrier.

They don’t say ‘good things come in pairs’ for no reason, and this show has certainly proved it with ‘Free’  and ‘Yes, I Was Drunk’ in quick succession with YIWD offering a brief bit of respite from the constant bouncing, pushing and shoving that has taken up enormous amounts of energy this evening. After such a fantastic vocal performance from McTrusty, his out of character sloppiness on the intro the ‘Brothers and Sisters’ is a bit of a shock as he’s normally so tight, but mistakes happen in everthing so dwelling on it would be unnecessary. No one seems to care however, as he is rendered almost useless bring drowned out by the immense noise ejected from the crowd breaking into the choruses with intensity and cueing Barry McKenna (guitar) into the simple yet powerful solo. 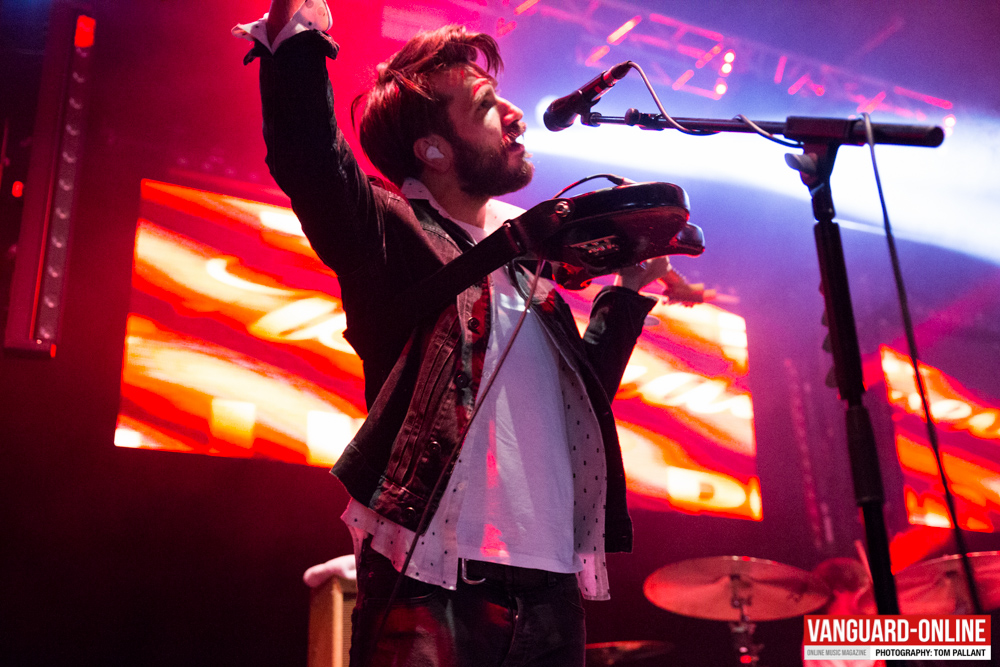 It has to be said that although not always in the limelight, the solid and consistent performances of Ross McNae (bass), and Craig Kneale (drums) can go unnoticed but credit where its due, these guys help create the solid bass and come up with the goods show after show. A slight whimper from the audience seeps out as they announce they ‘only have 1 song left’ but it’s clear what it’s going to be to there’s no hard feeling.

An extended version of ‘Heart & Soul’ from the Glasgow rockers builds up the anticipation of what i can only describe as an electric ending to a sensational night of some of the UK’s finest music. You can’t say that Twin Atlantic don’t give their all every time they play as you can see it seeping out of every pore of them that they love what they do, and yet are humbled by their fans and don’t take any of it for granted. Just when we think it’s all finished, an even heavier instrumental version of the chorus explodes from the stage showing the versatility of this band. Having announced that they’re heading into the studio in 2 weeks to start recording their next record, could this potentially be a new heavier direction for the band? or is it just a bombshell to end on at the end of a show? Whatever the answer, Manchester has been graced by the fantastic sounds of Twin Atlantic tonight, and it goes to show that Budweiser can put on one hell of a tour. 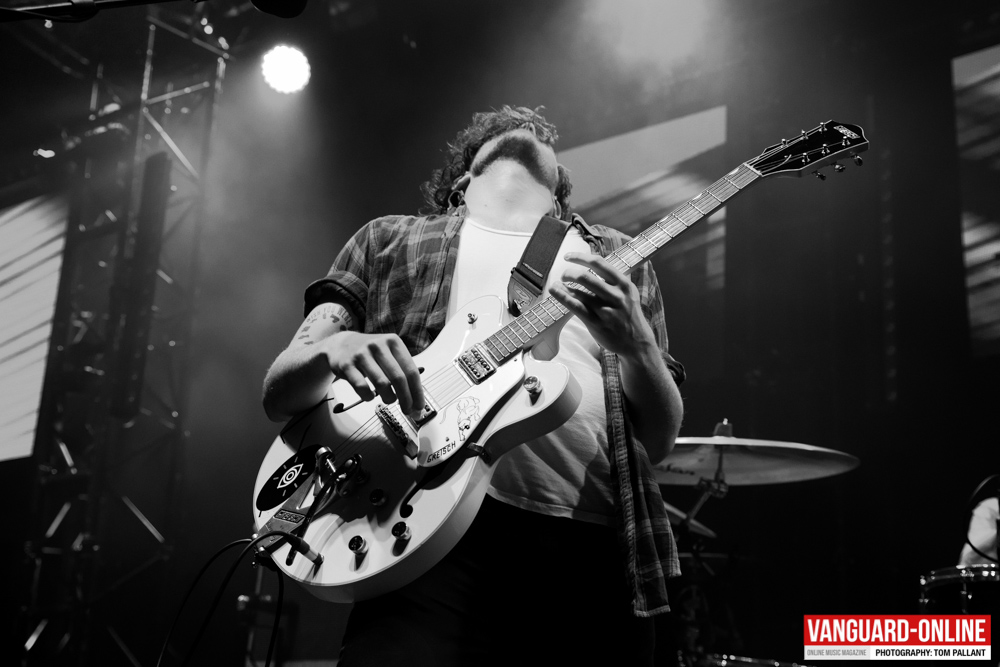