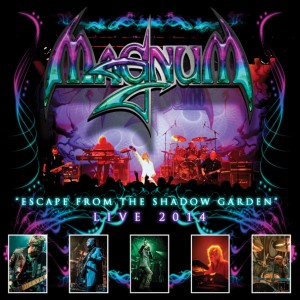 Before we start, there needs to be a disclaimer, this isn’t an unbiased review, I’ve been a fan since their Story Telling days with a full collection of albums on both cd and vinyl, eagerly awaiting new releases and finding/revisiting old gems.

Their ‘90’s live album ‘The Spirit’ still gives me goose bumps so why does another live album float my boat, well since the band reformed in 2002, they’ve been producing some great sounds that are up there with the old anthems and this new release marries the best of the old and new.

The first 6 tracks are taken from their last three Studio albums with the opener ‘Live till you die’ a magnum instant classic defining their sound and laying out proceedings. The opening rift of ‘Black Skies’ is another example of a band that that ain’t going gracefully, Bob Catley voice is better than ever and Tony Clarkin guitar work is just sublime interlaced with the rhythm section and keyboards whose contribution is sometimes overlooked but critical to the bands sound.

As we progress into the second half of the recording we’re well into the anthemic ‘On a story Tellers Night’ era. The goose bumps are back when the keyboards open on “how far Jerusalem”. When the band finally leaves this mortal coil and if Saint Peter stops them at the pearly gates, this track is their pass to paradise, its 10 minutes 39 seconds of pure genius.

For me ‘Les Morts Dansant’ is still as poignant as ever along with ‘All England’s Eyes’ and finally some of Bob’s legendary adlibs, you might even miss the newbie ‘Falling for the big plan’ in the middle, it fits so well. The album closes with ‘Vigilante’ one of their biggest commercial success and ‘Kingdom of Madness’ where it all started.

For me Magnum’s appeal is ageless, they are such a great band live with ability and self-belief that has seen them through lean times (commercially, definitely not musically) and have come out the other end stronger. I cannot stress to you how important Magnum where to me both in my past, present and future. I’ve grown up and got old with Magnum and they’re must come a time when age finally overtakes us all but that day isn’t today and definitely not evident on this latest release.

This is their 9th live album and fits perfectly into a discography stretching nearly 40 years and I hope it isn’t there last because live is where they are magnificent. This record leaves me wanting more with songs not present only due to the bands extensive back catalogue, I need to see them live again at the earliest opportunity but until then ‘Escape from the Shadow Garden Live 2014’ will satisfy that desire marginally.

Told you it wasn’t unbiased!