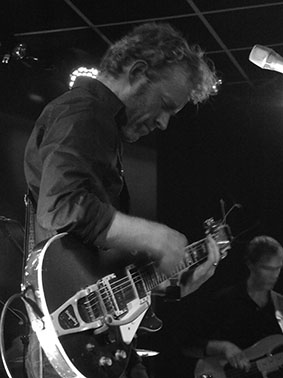 Despite the utterly foul weather on this grim November evening the Brudenell is already pretty packed out. There’s a clientele mostly made up of knowing indie types/middle aged men taking enthusiastically about ‘the old days’.

Support is from Barbarosa, who is a solitary beardy guy in a baseball cap, with just a basic set-up of keyboards and FX boxes along with a haunting falsetto vocal – putting me in mind of Jason Lytle from Grandaddy. The crowd are politely appreciative if not entirely gripped whilst awaiting the main draw.

From my position front of stage to the left I observe band leader Alan Sparhawk (I always thought that was great name) making final preparations – twiddling with the on stage kit in a slightly OCD fashion. Shortly after the full trio amble on stage dressed entirely in black with no fanfare or introduction, and after a faint ripple of applause, they’re into it.

I’ve not seen Low before so wonder if they will be chatty and ebullient or as enigmatic as on record.

As I expected it’s the latter – there’s no idle chit-chat between songs, just a hushed reverence from the crowd as they prepare for the next piece. This creates a palpable air of deliciously enjoyable tension, but 9 or 10 songs in Sparhawk comes out with the glib, tongue-in-cheek remark ‘Ain’t it great singing for people about your feelings’ and the place roars with laughter before they treat us to the majestic ‘Just Make it Stop’

The guitar playing from Sparhawk is effortlessly brilliant – he comes from the less is more school of fret-board mastery. He hardly seems to touch the strings but creates a mesmerizingly powerful noise ably supported by bass/keyboard player Steve Garrington who provides an atmospheric backdrop.

Standing (not stand-in) drummer Mimi took lead vocal for the first time on a heartfelt ‘Holy Ghost’ and her velvety, luscious tones were immediately appreciated by the crowd. They play a smattering of tracks from their excellent latest album ‘The Invisible Way’ on which she sings lead for five or six of the tracks along with choice picks from their ample 10 album back catalogue.

This is one of those occasions where you have a perfect marriage of venue and band – with a good sized crowd (but not too big) made up of a loyal appreciative fan-base enjoying the atmosphere that the musicians clearly also thrive on. They finish with a brutal yet beguiling ‘Nothing but Heart’ before saying some very genuine and sincere thanks and unceremoniously wandering off stage.

A few minutes later and they’re back on for ‘Canada’ and after some banter about what they would like to be played, a crowd requested ‘Two Step’. It being almost December I considered shouting out for one of their fantastic Christmas songs, but decided against it. That would probably be far too predictable for a band as compellingly cool as this.