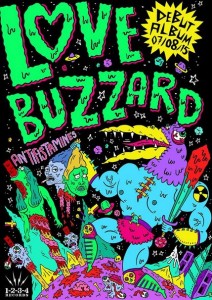 Before you get into the nitty-gritty of the Love Buzzard’s debut album Antifistamines, you need to recognise that this band is a duo. The guitar shredding of Kevin Lennon and impact drums of Al Brown are a symbiotic unit without support. Lennon also has to shriek and implore his followers in many directions at once. It is striking what they achieve here with so few resources.

The name of the record is inspired; Antifistamines, hay fever medication for the UFC generation. Lucky for the listener the songs don’t let the album title down. The war drums of Cash starts the conflict off, and they are soon joined at the front line by an intense elastic riffage. The song’s simple, yet enduring message is about cash, how we need it, how it corrupts us, and what we are like without it.

Headrush furthers the urgent tone of the record. It starts with distortion and a guitar falling over itself. The song builds into a stomping frenzy. The vocals are distant with a lot of reverb, but you can hear the call for a “super lover, freaky mother”. The drums embrace a metal tone, as does the guitar on the next track, Beams, but on Beams the guitar eventually transitions to an effortless and impressive grunge sound.

The Love Buzzards sound is marked out by a sense of urgency, Passion being case in point. It starts so fast it almost collapses, but once it finds its pace you probably have the albums most radio friendly track; quick, to the point, understandable and with a clear message. If the Love Buzzards want to become commercial, Passion should be their template. Superglue verges on the camp and it could descend into glam rock at any point; “Girl I’m on you, you cannot remove me” – the effect of his superglue on the object of his affections. The guitar crescendos twice, with the second thump 10 seconds from the end creating an extremely satisfying pay off.

The album’s stand out track Wild is teed up with a gorgeous electro country intro which could be off any Black Angels piece. When Lennon starts proclaiming his wildness you can picture him jutting his hips forward, intoning debauchery onto a crowd. The camp and glam are kept in tow by the power, you may break your ankle from the level of foot stomping required from this beast of a track.

The duo’s make up is bound to bring White Stripe’s comparison, but the only time it feels valid is on Origins. Lennon’s guitar and Brown’s drums here have a decent whiff of Jack and Meg. The drums break you down, and then the guitars build you back up again.

The album’s title track needs repeated listens, but on the third or fourth go the snarling guitar will have you head banging to whiplash levels like the rest of the record. The penultimate tune Lines, is a fuzzy number whose power drumming and electric finger plucking opens the door for the last track, Tower. This closer’s heavily distorted guitar intro is like the clarion call to battle before the Love Buzzards go into the fray for the final time, and this charge is magnificent. We are told we need to “build our city high, and live in the sky, we must fear those that want to come in”, but it’s trash rock at its most energetic that is being let in, and when it does, it soars. It’s an inspired move to leave a long power track for last, because you’re left wanting more.