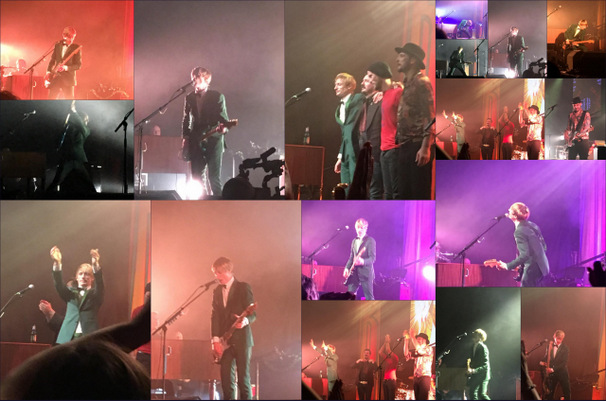 Tonight was the last night of Kula Shaker’s UK Tour, celebrating the 20th anniversary of the K album and the release of their new album.

What an intoxicating night it was!

In 1996 Kula Shaker exploded onto the scene with their debut album K which flew off the shelves. It was an album of eclectic psychedelic rock and subtle hypnotising beats. Kula Shaker amassed a massive faithful following.

Twenty years on with the release of K20 the song writing has matured, although the sound is still the same, it still has an eastern twist.

The O2 was bursting to its 1,362 capacity with passionate fans.

Crispian Mills – lead singer – appeared on stage to a euphoric roar from his faithful following. He was wearing a sharp tailored suit and Dickie bow tie and was sporting a custom designed guitar.

He then joked that as it was K’s twentieth anniversary they were there to play the complete K album. He held a vinyl copy of K in the air before kicking off the night with Sound of Drums. Sound of Drums is reminiscent of some of The Doors tribal material. The beat was hypnotic and drew the crowd in as a single entity.

Between the breath-taking brilliance of songs from the K album the band played a few songs from the new album K20 including my personal favourite 33 crows, which has a earthy folk feel to it .

The highlight of my night had to be the energetic rendition of Under the Hammer, which whipped the crowd into a hypnotic frenzy with a 60s rock feeling. People were banging their heads, swinging their hair. You could feel the floor bounce under your feet. All the time members of the audience were holding their phones in the air either to take pictures or let their friends listen to their gods of rock.

Crispian Mills went on to tell the crowd that they were asked by their management during the recording of K to record a love song, something poppy and they came up with Shower Your Love on Me. Shower Me With Your Love is the most subdued sound of the night but it has a nice beat and is lyrically very clever. Suddenly someone from the crowd shouted “I want your babies” which every rock star longs to hear – pity it was from a fella – but it did give the band a chuckle.

Crispin spoke of how he had once approached George Harrison for permission to use a guitar riff that Harrison had used on Wonderwall in the B side recording of Gokula. Apparently George Harrison and Crispin Mills went on to share their common interest in all things India and Krishna. Harrison then gave the go-ahead for the sample to be used, adding that he had stolen it from Eric Clapton anyway.

To sum up, this was the gig of a lifetime, and an early Christmas present. Kula Shaker never fail to please, they make it look easy, but the most important thing is they have fun while there doing it.