There are bands that have the felicity of expressing the longings of a group of young men well enough to earn their loyalty. That loyalty buys a few years of UK tours and a couple of albums before the audience moves on and, perhaps a re-visit in twenty years’ time on a reunion tour. We’ve all fallen for a band like that. Lonely The Brave have a way with a rising chorus and a formula for a tune that sounds rousing but leaves no trace afterwards.

This gig was a bit of a mystery. The Key Club in Leeds was full. It’s not a good venue – only bottled beers (mostly corporate p*ss), terrible line-of-sight, poor sound – so something must have dragged people out. That something is the decent studio material they have put out – not anything strikingly new, but competent and worth hearing. Unfortunately the sound does them no favours – boxy and muddled, no-one knew what the few stage utterances were. Even more unfortunately, their singer does them no favours either, with workmanlike delivery. The lyrics themselves are clearly significant – the stuff we often hear from small town Welsh bands; about rising up, overcoming, sometimes getting by. They ride a stolid musical framework; it does the job of holding them up but leaves no shape in the mind. Many fingers point and arms wave as the key songs are played, choruses are sung from the audience and smartphone videos made. 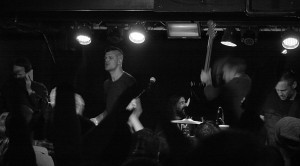 The guitar and bass combo produce a decent rush and choruses rise anthemically from prosaic verses. The drummer mostly plays along with the band, stirring as the set passes and faster songs appear, to play more firmly. The band take a break from their own material to plod through Pink Floyd’s Comfortably Numb. This song is the refuge of many third-rate American jambands and shines no brighter here, its glum sentiment dragging the band into a muddy singalong.

It is impossible to consider this band without mentioning Funeral For A Friend, Lost Prophets and Biffy Clyro (though without the latter’s interesting side-moves). Bands that have had their moment, expressed the dreams of a cohort and been replaced by the next almost-good band. It takes a lot to really stand out and without originality, it’s never going to happen.

Somewhere near the end of the hour-plus set, the second big song is unleashed to big audience reaction. “If you be the sky then I’ll be the bird” they sing and happy punters capture the moment on selfies or videos. I’m left, um, comfortably numb, and feeling the evening might have been better spent. If you are inspired to hear more of the band, their CDs will be available on the used section of Amazon for a penny in two years’ time. Meanwhile, enjoy the camaraderie and sing-a-longs while you can.