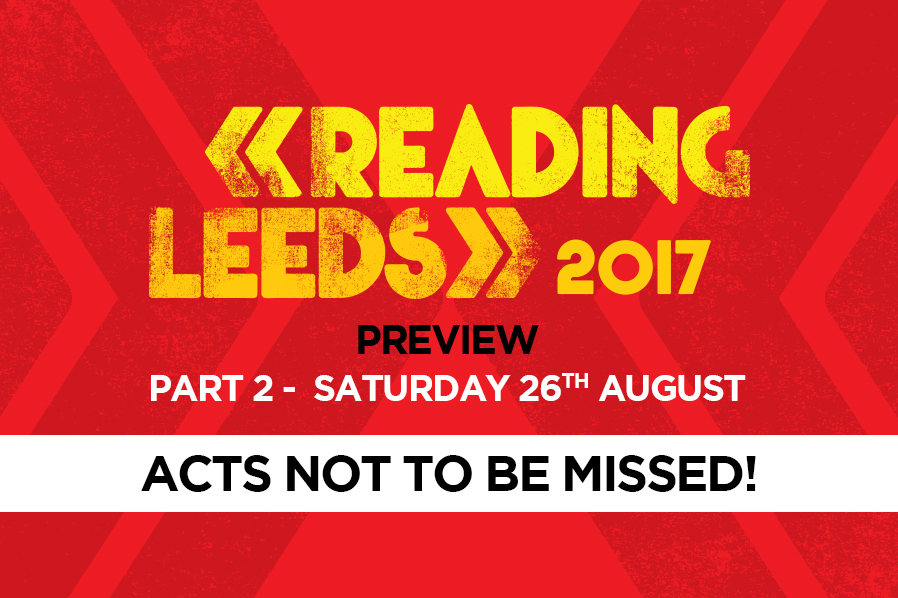 After a full throttle first day at Leeds Festival, it’s time to shake off those hangovers, slide on the wellies and sunglasses (hopefully!), and return to the main arena for round two of the big bank-holiday weekend. With plenty going on as usual across several stages, here are our top picks from Saturday’s line up in Leeds to make sure you squeeze some of the best bits from the day…

Ten years ago it would have been unheard of to see a band like Bastille stepping on the hollowed grounds of the Bramham park main stage. But times of changed and it is a welcomed add-on to an almighty line up for 2017. The hits are very much getting easier to roll of the tongue from these London boys. Still do get a bit confused with some of their pronunciations but heck they smash out some sweet numbers. I am envisioning a great number bellowing out every lyric to Pompeii in the beautiful fields of Yorkshire come Bank Holiday Weekend.

We all know the massive tune ‘Tidal Wave’? Well Nick Douwma (aka Sub Focus) is the mastermind behind that epic anthem. It would be worth watching this guy just to hear that hit. But if you want a good dance, this is the act to pencil in. You won’t want the set to end. I would recommend some pro plus for this one. Not for the weak…

Who ever thought a guy called Norman would become one of the world’s biggest DJs? Well Norman Quentin Cook (aka Fatboy Slim) has certainly earned his place in legend status. The fact that he looks like your drunken embarrassing uncle dancing in his overpowering Hawaiian shirts at your second cousins wedding has done wonders for the guy. But seriously, what 90s kid would forget his masterpieces ‘Praise You’, ‘Weapon of Choice’ and ‘Right Here, Right Now’? The videos for these alone give her stature. For those that don’t quite fancy Kasabian, he is a good one to tick off the bucket list and will guarantee you a good night.

New Jersey rockers Palisades will be heading to Leeds Festival on Saturday (Reading Friday) with their alternative rock taking on The Pit stage nice and early to get you ready for a day of madness! Palisades recently released their self-titled LP, which gave the band its strongest chart debut ever. With songs as strong as ‘Let Down’ and ‘Chemicals’ it’s no surprise they are turning heads, and they will certainly pull a large early crowd to shake off those hangovers!

Now Deap Vally are a treat to share to the wet, soggy fields of both Reading and Leeds fest. I think these girls might be the coolest motherfuckers at the festivals. Not only that, they have this old school hotness about them that goes with their sound so perfectly. I almost expect this band to be playing in some bar in a Tarantino movie when a blood bath is going down. If you want a wake up call on Saturday to get you pumped for the rest of the line-up, check the girls out, as they’ll be rocking out of the main stage early afternoon.

You Me At Six
NME Stage

It only seems like yesterday when we stumbled into the Festival Republic tent to catch an energetic thirty minute set from You Me At Six, throwing their bangers at us left right and center from their debut album ‘Take Of Your Colours’. Unbelievably this was almost 10 years ago. Since then they have worked their way up the stages at R&L, released numerous chart topping albums and hit singles, and now, finally, they get to headline the NME tent at this year.s festival. It will be a deserved spot for one of the UK’s hardest working bands and a set full of moshing, anthems, moving sing alongs and party hits to prove their worth!

With a fresh new albums worth of material to add to their crowd pleasing back catalogue, Mallory Knox return to Reading & Leeds with their fantastic new album ‘Wired’ full of energy and in full swing. Another main stage performance proves they can handle the big one at R&L with much confidence, and you would expect nothing less if you’ve had the chance to catch these guys live before. If you haven’t, make sure you do not miss it!

Arcane Roots have recently resurfaced with a belting new track ‘Off The Floor’ from their forthcoming album ‘Melancholia Hymns‘, and they will be itching to treat the Reading & Leeds crowd to some new music as well as the usual earth moving show we know too well. After smashing R&L last year, the three piece are guaranteed to throw a show to remember on The Pit stage once again!

No strangers to the live circuit, Counterfeit. have been playing a string of shows & festivals around the UK & Europe in furious style. As well as hitting European territories, Counterfeit. performed at Slam Dunk Festival in the UK for the first time, and will be making their debut at the renowned Reading and Leeds Festival on The Pit stage. Speaking on Counterfeit’s live shows, frontman Jamie Bower promises a set to remember;  “We’re here to create memories so come down and get involved, or hear about it all from your mates after the show and regret it forever…”. So Don’t say we didn’t warn you!

After a UK run of shows, tearing through Japan, and supporting NME stage headliners You Me At Six in Europe recently, The Amazons are full of confidence and sound better than ever live. As another band fresh off the blocks with a new album’s worth of material to throw our way, these guys are ready to pull in a crowd with their fantastic new music at Leeds Festival on Saturday, especially on their home turf in Reading (Friday).

The Irish hit the main stage on Saturday with the ever getting more popular Two Door Cinema Club. After the release of crowd favourite ‘What You Know’, this band has simply climbed and climbed. Now their laughing it up on the main stage of the Leeds and Reading Festival 2017. Now with the relealse of last year’s album Gameshow, the three-piece are in fine form and are not one to be missed on Saturday afternoon. Watch out for big tunes ‘Are We Ready’ and ‘Bad Decisions’, great festival tunes!

What can we say? Kasabian are riding the high life at the moment with their fantastic studio album ‘For Crying Out Loud’, and they are headlining the festival on the Saturday night (Friday Reading) which is set to be an evening to remember. Having displayed their dominance with a main stage headline spot in 2012, it’s no surprise to see the Leicester lads back at the top of the bill. With an endless list of hits to keep you more than entertained, make sure you catch Kasabian’s performance as the drop by R&L once again!

These are just some of the insane acts that will be showing their faces on Saturday at Leeds, & Friday at Reading. We’ll be running a Sunday’s Leeds preview very soon so keep tuned!!