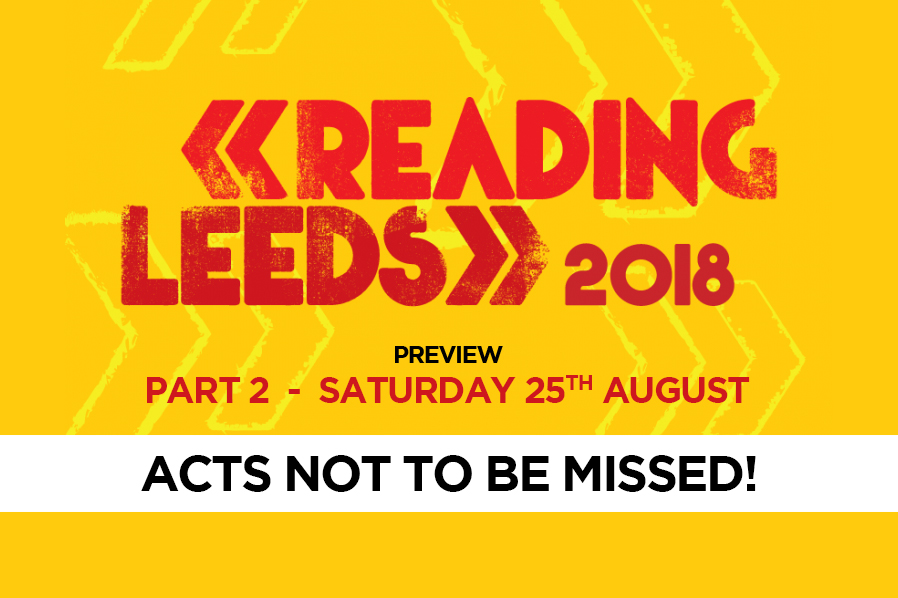 After a full throttle first day at Leeds Festival, it’s time to shake off those hangovers, slide on the wellies and sunglasses (hopefully!), and return to the main arena for round two of the big bank-holiday weekend. With plenty going on as usual across several stages, here are our top picks from Saturday’s line up in Leeds to make sure you squeeze some of the best bits from the day…

As ever, Fall Out Boy will be taking us back down nostalgia lane with their old anthems, but they also have a full arsenal of new material to boast from their recent album ‘Mania’. We caught them headlining arenas earlier this year and these guys have really upped their game. Solid on stage with a setlist to match, FOB blew us away with their huge sound and even threw in some explosive pyro for good measure. It’s their first time headlining the Reading & Leeds and you can guarantee they will give it everything they have got to prove their worth topping Saturday’s bill in Leeds!

The Wombats are another band with a brilliant new album cycle on the go, and we can’t wait to catch some of their new tracks from ‘Beautiful People Will Ruin Your Life’ live on the Leeds Festival Main stage. 2018 has already seen the Liverpool-bred trio headline a bunch of brilliant shows across the UK, and these guys are as good as ever to get those festival vibes to the max.

In celebration of their hugely anticipated debut album ‘You Are Someone Else’, Fickle Friends have announced their biggest ever UK headline tour for late this year. But if you can’t wait to get a taste of what’s to come, make sure you head over to the NME stage on Saturday for some feel good indie pop from the Brighton quintet. If you haven’t already checked Fickle Friends out, give ‘Brooklyn’ and the recent ‘Say No More’ a listen and we’re sure you’ll have them on your radar!

With an incredibly cruel headline calash with Fall Out Boy, the fantastic Wolf Alice are set to headline the NME stage at Reading & Leeds for the first time. The Murcury Prize nominees have blown us away with their second album ‘Visions Of A Life’ after its release last year. A secret set at last year’s Reading & Leeds gave the lucky few a glimpse of what we can expect from the London four-piece, as they can deliver a rollercoaster of a show from beautiful tracks such as ‘Planet Hunter’ to furious rock like ‘Yuk Foo’ to spark some chaos in the NME tent.

One band perfect for the summer festival bill is the Brit pop rockers The Kooks. Releasing their ‘The Best Of So Far’ album last year, these guys have a set of tracks which will have us singing along in the sun with little persuasion needed. Belters like ‘Bad Habbit’ & ‘She Moves In Her Own Ways’ alone will likely be highlights of the weekend, so if you can make sure you catch the Kooks on the main stage.

Nothing But Thieves exploded back onto the scene with their second full length album ‘Broken Machine’ last year with great intent. The Essex rockers have created some gems for the recent album in the forms of ‘Sorry’ and the fiery ‘Amsterdam’ built for the big stage. Subbing the NME stage in Leeds on Saturday, expect a huge crowd to gather for a powerful rock show.

SWMRS have had a whirlwind couple of years since releasing their excellent debut album ‘Drive North’ back in 2016. The bay area quartet return to Reading & Leeds for only their second appearance at the festival, and they will be sure to brew up a storm on the NME stage early to shake off those Saturday morning Hangovers in Leeds.

Guaranteed to be one of if not the rowdiest set of Reading (Reading Only) The Fever 333 may not ring a bell, but these guys recently formed with ex-Letlive. frontman Jason Aalon Butler, Stevis Harrison and Aric Improta. The American post-hardcore/rapcore band played their first ever UK show at Download festival recently and it was one the highlights of the weekend. Mosh pits, circle pits, and crowd surfers galore, The fever 333 will put you through your paces at the Lock Up Stage. We’re pretty gutted they won’t be at Leeds, but Reading are sure in for a treat!

These are just some of the insane acts that will be showing their faces on Saturday at Leeds, & Friday at Reading. We’ll be running a Sunday preview very soon so stay tuned!