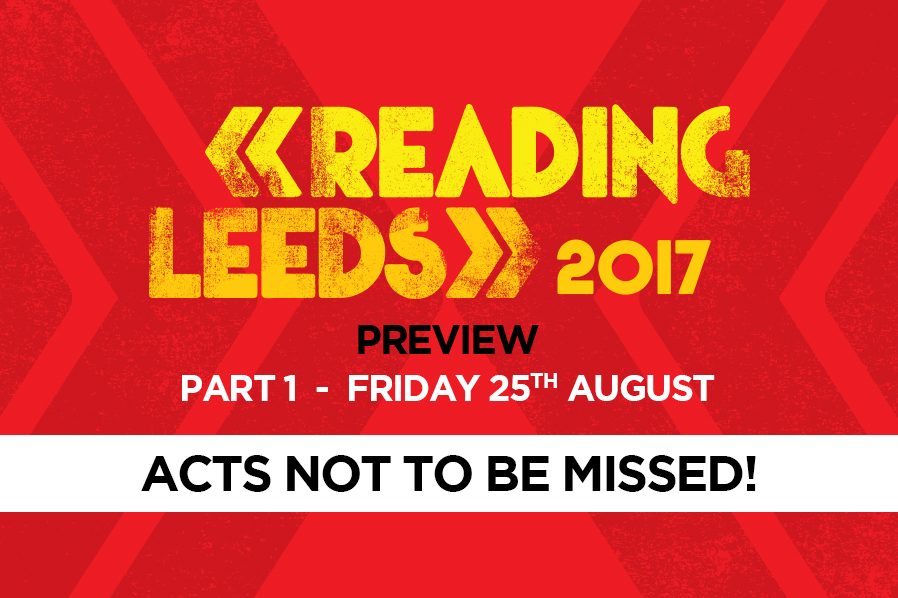 With summer well on the way, the August Bank Holiday weekend can not come fast enough for Reading & Leeds Festival! To kick things off and make sure you’re ready for the opening day in Leeds (and closing day in Reading),  here’s some of the acts that we at Soundcheck-Live can’t wait to check out!

A headliner act for opening day at Reading & Leeds fest, Bugzy Malone is a definite alternative to those who don’t quite fancy Muse. There is fierce attitude with Malone who would easily get a crowd entranced. The established grime act is a perfect tent act and benefits from the intimate crowd. It is personal with Malone. His tracks put you in his shoes. You feel what he feels. A definite experience worth a try. It could get intense.

This indie pop sensation is a band worth seeing. Hitting the ground running, 2016 was a great year for the Stockport boys and we’re expecting good things. Their UK tour has been hugely successful and they are busy on the festival circuit this year. Some may argue that it is a bit soon for such a high spot on the bill, but I’d reserve judgement until that opening day.

Promised to get your festival off to a great start, X Ambassadors are the hidden heroes to some chart topping hits such as ‘Jungle’ and ‘Renegades’. Originating from New York, the four-piece are a complete festival package with their catchy choruses, anthem style sound and energetic persona. This one is set to be a perfect kick off to the festival with the NME tent a suited place for their festival anthems.

Charli XCX has gone of the scene a little lately, maybe not to the fans but definitely the mainstream. But we can’t forget her slick feature with Iggy Azalea with hit ‘Fancy’. A high profile name for an early set. Always the ones you want to get yourself down to. If past performances are to go by, this one should be a good one!

Ah Liam Gallagher… I think most people will think of this as seeing one half of Oasis but Liam’s solo decision to go solo from Beady Eye has most definitely picked up momentum, which could be down to his hectic festival schedule. Thanks Liam for including Reading & Leeds in that busy diary of yours. This guy is always going to be one of the highlights of the festival, if not for the music for the banter and his ‘says what he wants’ attitude. I’d imagine are heart-felt rendition of ‘Don’t Look Back in Anger’ will also feature as he continues commemorate those affected by the Manchester terror attacks. We can’t wait to hear some Oasis classics mixed with some brand new tracks from his upcoming album ‘As You Were’.

Along with Eminem, Muse are the main attraction of this year’s Reading & Leeds festival. Their live performances are a spectacle to be a part of. A band with true showmanship who deliver the unpredictable whilst still pulling out the goods. They pull out all the stops and are one of those acts that don’t set the benchmark but break them. With a back catalogue of outstanding super hits and all the tricks in the book for their live set, this is one not to be missed. Expect the unexpected.

Yet another Grime selection but definitely worth watching. It’s great to see more grime at festivals like Reading & Leeds fest. Makes it a much more dynamic event and changes the atmosphere for the better because you’ve got all these different music types coming together. Wiley’s probably more one for the mainstream grime fans as chart time has been no stranger to Wiley, whereas I think you’ll get a darker experience with Bugzy Malone but both worth watching in their on right.

These three gifted sisters have just released new album Something To Tell You and I’m sure you’re in for a treat as they test the new material on the humbled crowds of Reading & Leeds fest. Of course they’ll be smashing out such hits as ‘Want You Back’ and ‘Little of Your Love’ so plenty to get you dancing, It’s the American three piece’s first headline spot at the infamous festival in the grounds of the NME tent so should be big moment for them.

Off the back of their debut full length album ‘In Our Bones’ released only last year, Poughkeepsie (NY) Alternative trio Against The Current are being thrown straight onto the main stage to treat us to a set of fun, bouncy pop rock bangers to kick off the weekend nice and early. Front woman Crissy Costanza maybe bite size, but she packs a punch, and the legendary Reading & Leeds main stage is just another tick on the list for these guys.

A random one to feature but one that I think would be worth checking out. Don’t let the unusual name put you off as these Norwegian punksters have some genuine tunes in their locker. Tracks like ‘Take Me Dancing’, ‘Empire Records’ and new single ‘Nancy Drew’ are full of energy and I imagine this will be reflected in their stage presence. So I’d recommend giving this band a huge Reading & Leeds fest welcome at the Lock Up tent on Friday afternoon.

Let’s take it down a level and get more chilled for the soothing sounds of Tom Grennan. If you haven’t heard of him, slap him on Spotify or Apple Music and give ‘Something In The Water’ a taste. What a tune! Even if you just went to listen to that track it would be worth it. But he does have some keep you strapped in for the rest of the show with cracking tunes like ‘Praying’ and ‘Giving It All’. I think I’d be grabbing a can and sitting just outside the tent with a pizza in hand for this one.

These are just some of the insane acts that will be showing their faces on Friday at Leeds, & Sunday at Reading. We’ll be running a Saturday preview very soon so keep tuned!!