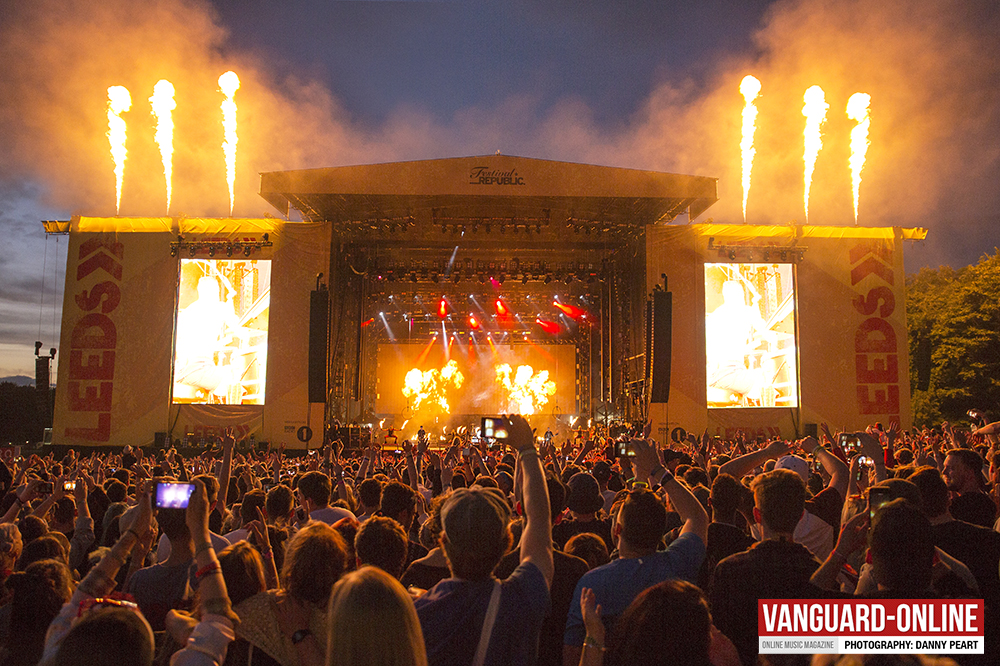 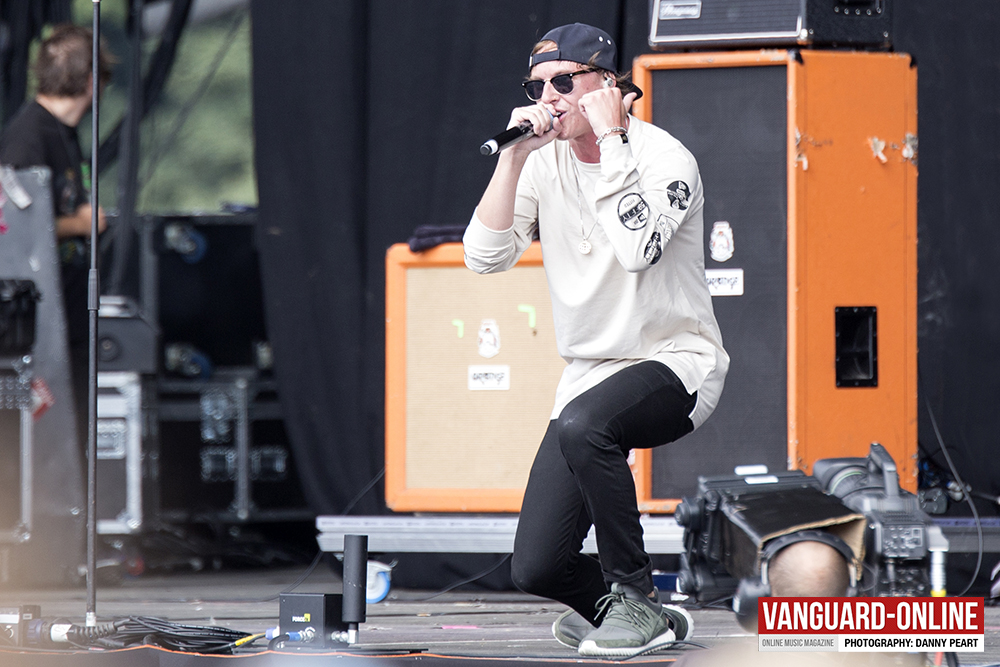 State Champs travelled all the way from New York to grace the Main Stage and officially open up Leeds Festival 2016. The pop punk 5-piece were met by an anxious crowd ready to kick start their festival. Front man Derek Disciano led the line proving that this band has earned their right to the honour of the first slot on the Main Stage. It’s no surprise that with six years under their belt they have genuine chemistry that emanates from the stage during songs like ‘Secrets’ and ‘All You Are Is History’; a genuine pop punk anthem in the making. 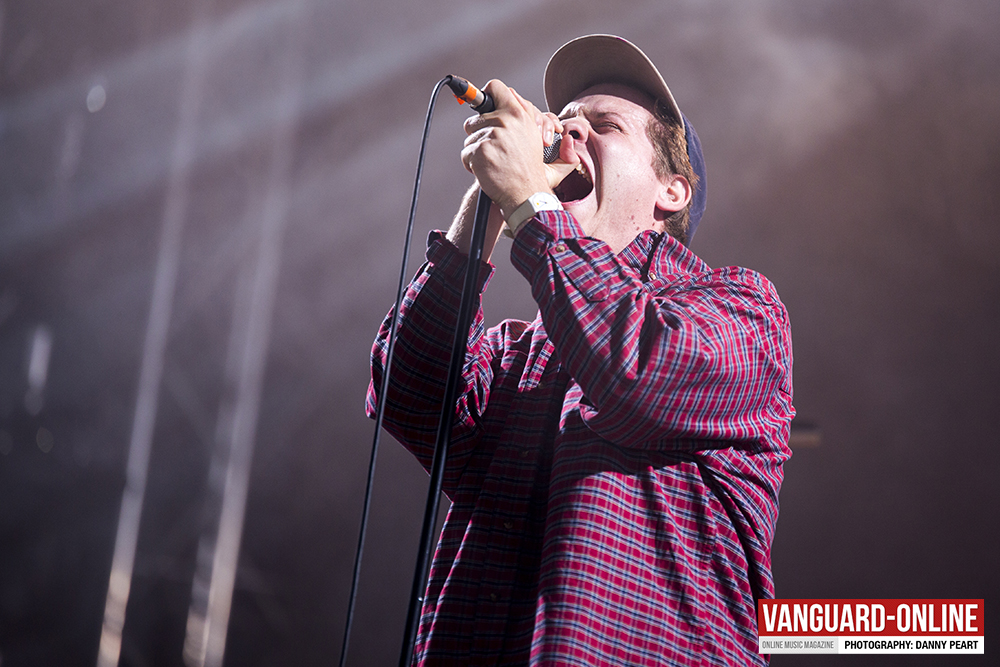 It’s so good to see a band like Basement that have been through the difficulties they have being able to come together and enjoy an experience like Leeds Fest together. Being dotted around the country during writing ‘Promise Everything’ there must have been moments in which these guys thought it might never happen. However, they stepped onto the NME stage and put on a performance they can truly be proud of and I know their crowd agreed with me. 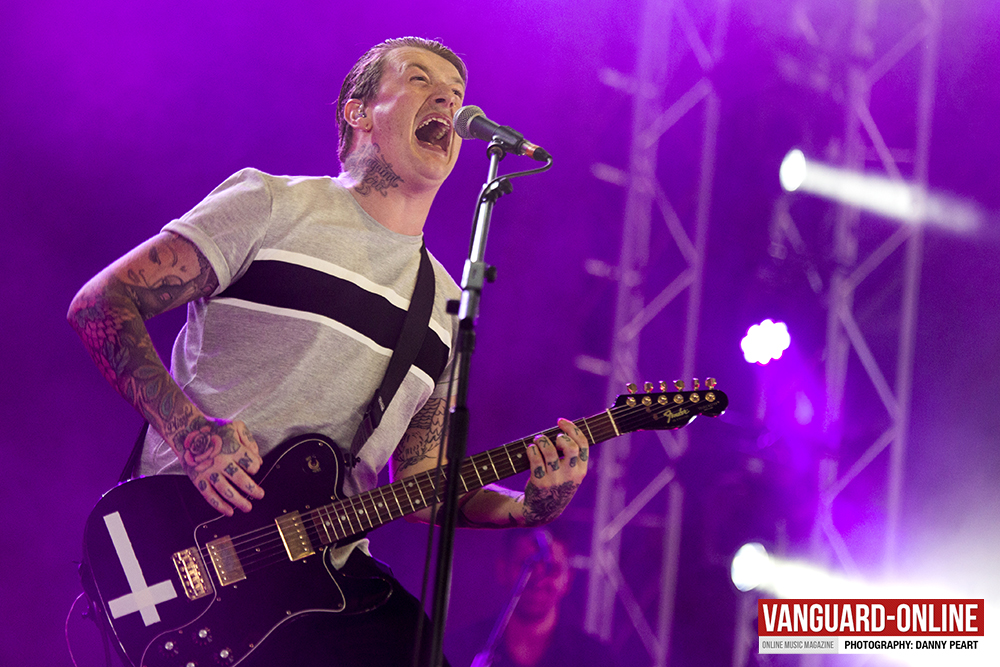 They’re back. Deaf Havana are back with a new permanent line-up with Matt Veck-Gilodi stepping in as full time guitarist. Walking out the theme tune from Netflix series ‘Stranger Things’ Deaf Havana looked more refreshed than they’ve been in years; they looked filled with a sense of direction and purpose in the ability to say they definitely had a new album coming out. This was reflected in their performance cracking through Deaf Havana classics as well as new tune ‘Sing’. I’m yet to be disappointed with a live Deaf Havana performance. 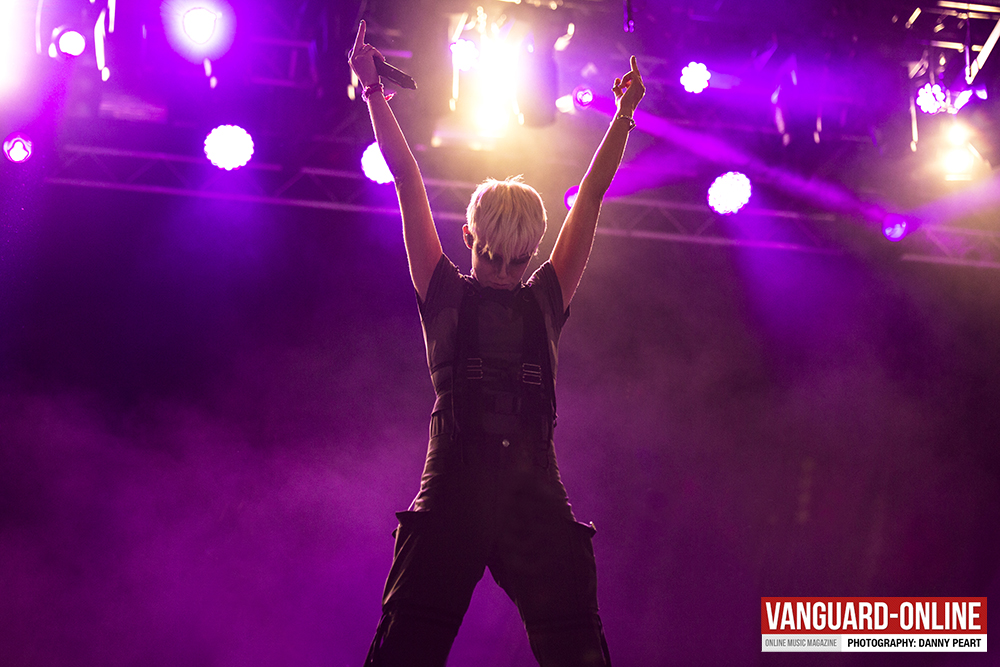 Tonight Alive blew the roof off of the NME tent. World class sound, production and stage presence all lent themselves to this masterful performance from a Tonight Alive in the midst of an identity resurgence. The respect I have for the message Tonight Alive are putting to their fans about self-affirmation and personal confidence in truly being yourself and not caring what other people think, is potentially one of the best things a band can do when rock music fans have often been known to struggle with mental health issues. Led by Jenna McDougall the Australian natives produced a performance that won’t be forgotten in a while. Not just for the incredible music, but also the message they were championing. Tonight Alive are the best they have ever been. 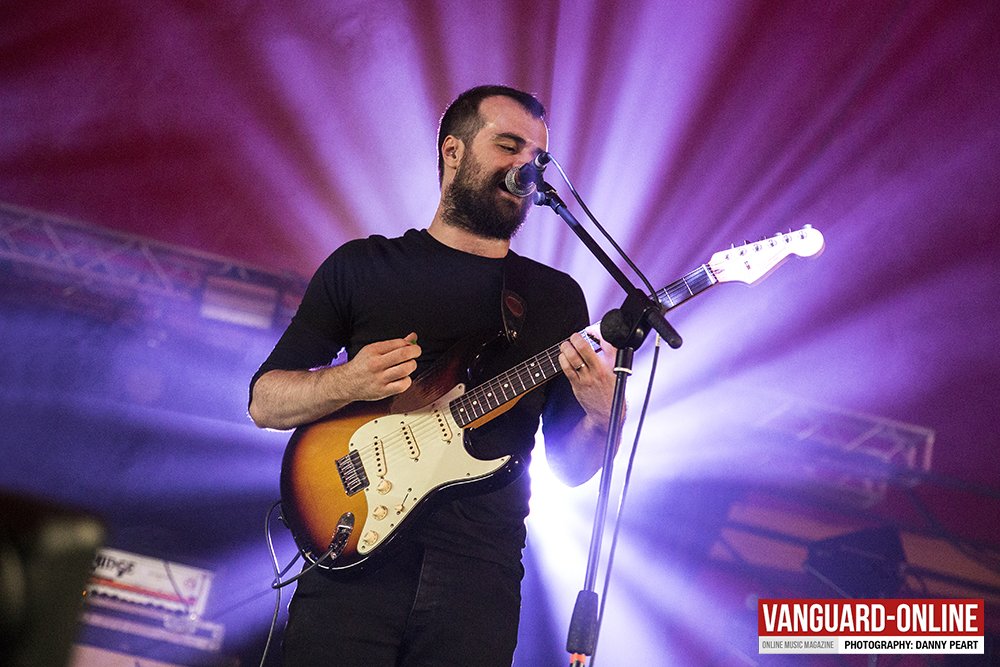 Over to the Lock Up stage for 3-piece alternative rock band Arcane Roots. Arcane Roots have this wonderful ability to join heart-wrenching vocals with riot inciting riffs which work in perfect harmony. The brought blood, sweat and pits to Leeds Fest and everyone was better off for it. 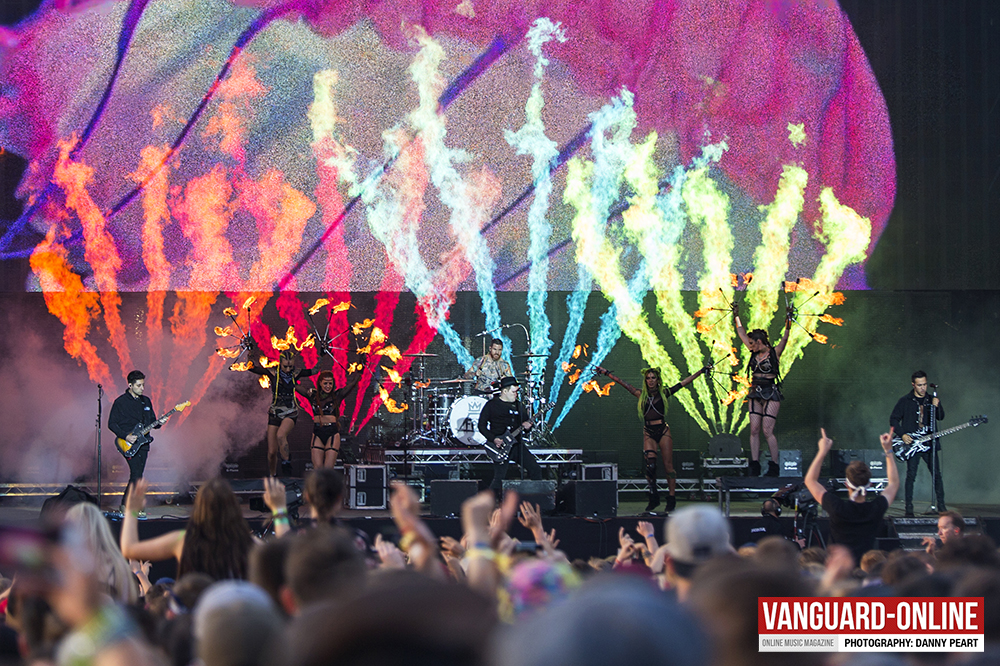 Co-Headliners Fall Out Boy rose as the sun set to a huge anticipating crowd at the Main Stage. They emerge from screens along with burlesque style fire breathing women to an eruption of cheers. Pyrotechnics, incredible graphics, fire performances and a catalogue of classics later and Fall Out Boy had set the bar incredibly high for Biffy Clyro to follow. It’s so clear to see why a band like Fall Out Boy have stood the test of time even when they’ve briefly take time apart they seem stronger than ever now. It comes to a point that despite each member having such significant and distinct personalities that they mesh together in the best way to offer up this music to their adoring fans. A truly special performance from one of the most recognised bands on the planet. 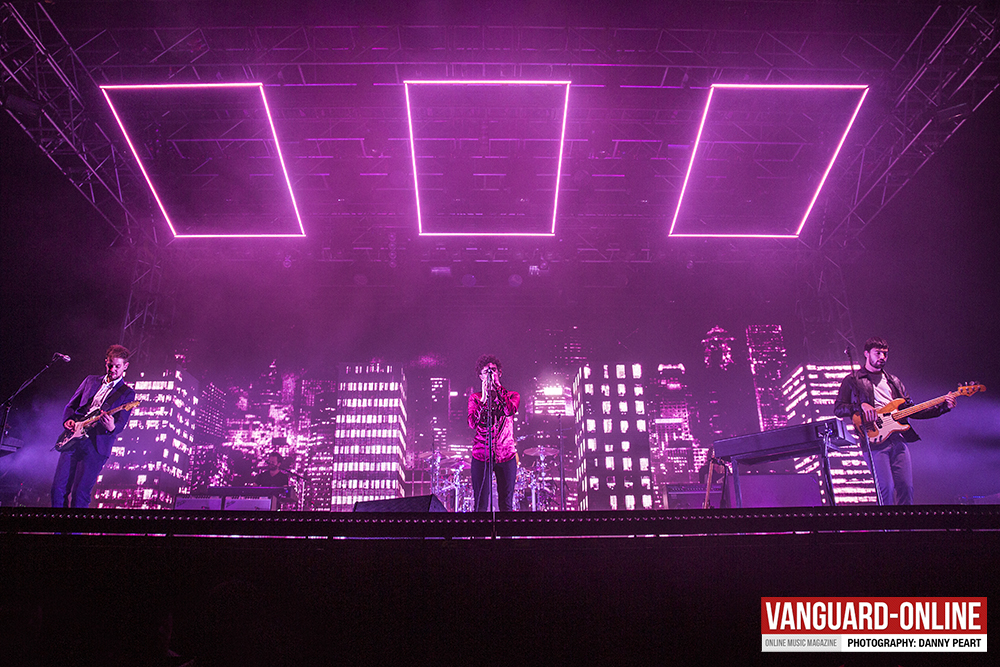 Over on the NME stage, The 1975 bring their revitalised pink clad party to Leeds. The familiar neon rectangles and brightly light props litter the stage as the Wilmslow four-piece take to the stage. Front man Matthew Healy has developed so much as a performer over the last 4 years since their debut album. Despite having been a band for 14 years, it seems like they’re finally coming into their own. The new 80’s inspired album has been reflected in their stage get up with baggy silk shirts and turtle necks the norm. They launch into a newly bolstered library of songs with horns galore to the screams of the Leeds contingency.

It’s fascinating to see the way Matty moves on the stage. He even has a smile on his face these days as he performs. The rest of the band leave the animated movement to Healy but still deliver on every front. It has to be said, the set list order seemed to heaivily favour the new album until the second half of the set. I think they could have benefited themselves by mixing the two albums together to keep the pace of their set at one that would have flowed slightly smoother. Having said that, closing with ‘Chocolate’, ‘The Sound’ and ‘Sex’ was a stroke of genius. I’m already interested to see what’s next for the 1975 and their current album has only been out 6 months. 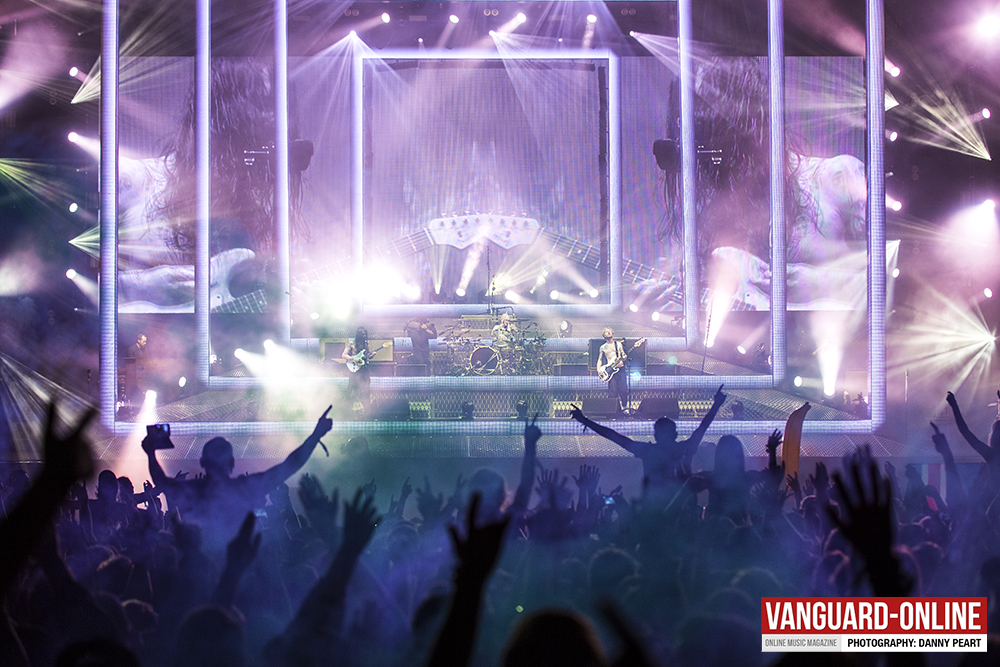 The Scottish trio, Biffy Clyro, took to the Main Stage of Leeds Fest to a thunderous reception. The set compromised of a series of squares that got smaller to create an incredible depth to the stage which massively aids the fact there are only three men on stage. These squares were displays the took on part of a lucid visual experience to partner Biffy’s unique brand of rock. Through each song Simon Neil proves his limitless talent and endless energy.

You have to wonder how a band like Biffy Clyro keep going and maintain such a high level performance after all these years. But none-the-less, we’re gifted an unforgettable show. And it’s just that, a show. With every moment and every note, Biffy know that it’s a show they’re putting on – not just playing their greatest hits for the crowd. That’s the mark of a true headline act. 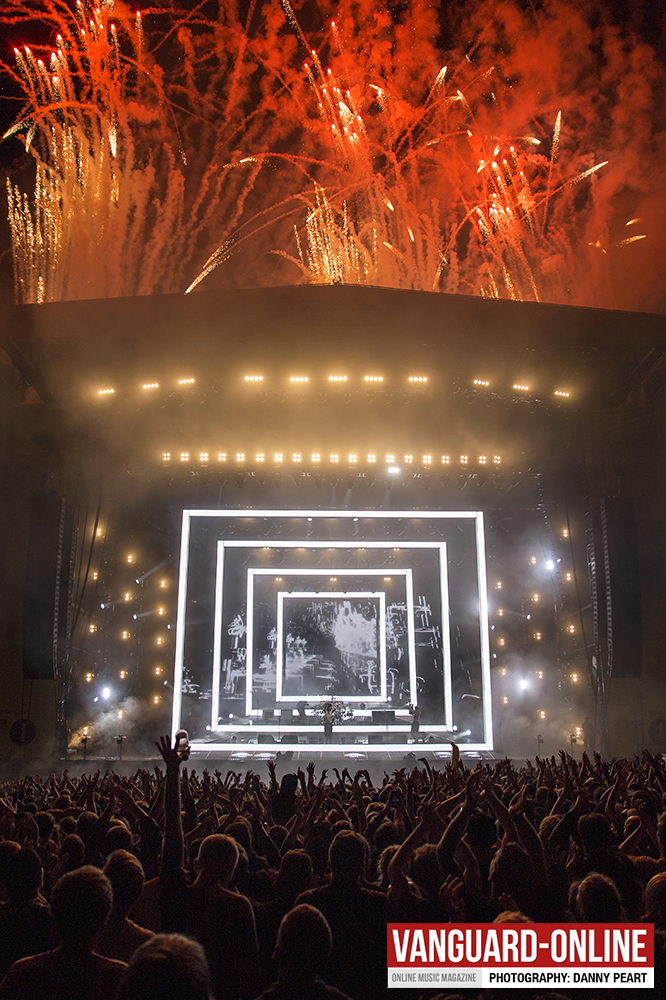