Paul Klein (lead vocals/keyboard/guitar) Jake Goss (drums) Les Priest (keys/guitar/vocals) came together in 2014. They were signed up by the UK label Polydor Records after being noticed on Soundcloud. Tonight Lany are supporting Ellie Goulding and John Newman. 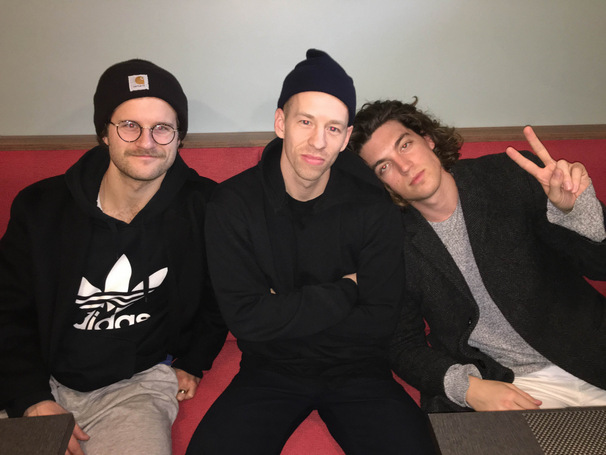 I met the band early afternoon at their hotel. They were relaxed before their big night. Straight away I was mesmerised by Paul the lead singer. He has the creativeness and looks of Jim Morrison, and the jawline and sex appeal of Michael Hutchence.

How did the band come together?

Jake and Les were already in a band together and Paul was doing solo work. It wasn’t quite working out for Paul and he got in touch with his two friends.

Your becoming very noticeable quickly for an unknown band. How are you coping with the success?

I wouldn’t say we were successful yet. We are a support band tonight. We have a long way to go but we will be back in the fall with our own show.

Social media has significantly helped you…from the signing of Polydor Records, to reaching out to fans. Who deals with this? And what’s your thoughts on downloading free music?

Paul deals with this side and we definitely think free music is a good idea. Being online has helped us to get our music widely herd, that and a lot of hard work. We want to stay real and keep doing what we love in the same way Lorde has with her success.

In the last few years from your first song to your last song do you think your music has changed in any way?

Most of our music has the same sound, but the biggest deviation would be that our recent piece has drums on it and fine tuning being homed in on.

Who writes the songs?

We all collaborate, with Paul doing the majority of the lyrical side.

Are you still in your one bedroom apartment recording your songs from your old Dell computer?

Yes it’s still the Dell computer but Jake just recently got married and has a place now with his wife. So now it’s just Paul and Les living elsewhere together.

Talking of that brings me onto wondering how you deal with your busy time schedule with your uk tour to going back to the U.S.A for lots of festival appearances. How do u manage juggling your career with your social life?

Well it’s worked out well for Jake his wife even visits from time to time while away. Didn’t quite work out as well for Les or Paul. Saying that we are off in April although hold on that’s for recording and creating new work.

Are any of you from a musical background?

Are you nervous before tonight’s show? Do you ever make mistakes live on stage and how do you deal with them?

Paul gets nervous and can’t sleep before a song gets released but none of us get nervous before a show. Whether playing to one person which has happened before and Paul ripped his shirt off, or to hundreds. We still give the same 110%. Paul can sometimes forget the words to songs but no one notices as most audiences haven’t herd us before.

Any new merchandise on the cards?

We have started doing vinyls and are giving a few signed ones away in a competition on our Facebook page ‘thisislany’. Also in the process of new ‘Lany’ pens and ‘I Love You So Bad’ pens. We would be interested in someone working on Lany ads for us.

What are your dreams and goals for Lany?

To have a number one record and be headlining shows to large audiences. 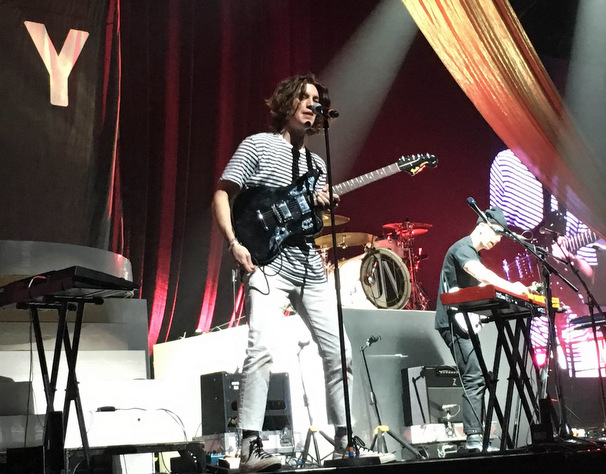 In the evening Lany come on stage at the Glasgow Hydro. The 13,000 venue is a quarter full. Lany start with the new single ‘Where Have All My Friends Gone’. The crowd love it. Paul shows us half a bottle of buckfast someone gave him, saying its tastes like cough syrup.

Paul loves to flick his hair on stage. A few songs in he converses with the crowd saying that Lany definitely don’t deserve to be on the stage playing to the audience and thanking Ellie Goulding for having them. Later on he stops to pick out a girl from the audience who is wearing a Lany t-shirt. “Jessica right?” The girl in the crowd affirms. “She’s from Scotland and was studying abroad. She came to 2 or 3 shows?” Jessica shouts “3!” “Okay. She’s amazing she’s here tonight give her a round of applause”.

He then takes time out to mention myself saying “we got interviewed by this nice lady over here” before their last two songs.

What an appreciative and humble band.

By the end of the show the band had the entire crowd singing along to the ILYSB lyrics.

Rounding up their show Paul finishes with how the “Scottish people are so super nice. We have been blown away by everyone and we will be back in the fall (laughing) in a much smaller room”.

After the show Paul jumps of stage to have a conversation with Jessica. I manage to capture this special moment and spoke to her. Jessica thought Lany were incredible as always. She said it was really interesting to see them in a large venue and still hold their own, especially with a crowd who they’re unknown too, but she’s sure their anonymity wont last for long! (And I couldn’t agree more). To Jessica their music stands out and she’s excited to see them come back to the UK. 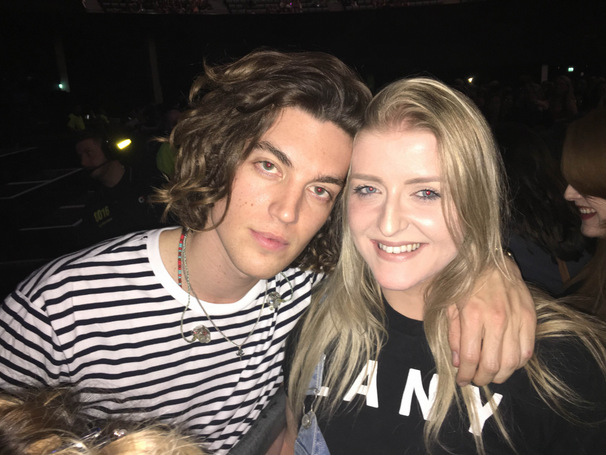 The trio really captured the audience. Jake Goss with his tantalising beats; the precision of Les Priest on guitar and the sex appeal of Paul Klein. I’ve a strong feeling there are bigger things to come. Their lyrics pull in the younger crowd, their 80s style pop appeals to the maturer members of the crowd.

After this I can say I’m a fan.

I’m looking forward to watching their journey in the music industry!

1 thought on “Lany have fans that love them so bad”