KYLIE MINOGUE is coming to Oxfordshire!

If it happened before and was a huge success than it should happen again: This might be what the organizer of The Nocturne Live thought which is why it will happen again at the lovely Blenheim Palace in Oxfordshire. And you will never guess who is coming to this amazing show. It is … wait for it … Kylie Minogue! 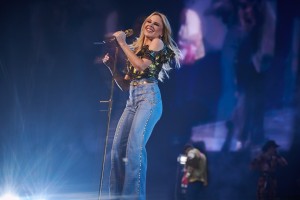 The amazing Australian singer will perform not only hits from her latest album Golden such as Dancing but also her classics like Can’t Get You Out of My Head.

The power lady still doing her Golden Tour and will be back for more in the UK on the 23rd June 2019. But if you thought that this was all then you are wrong. More good news are about to come. Our fabulous Kylie will be supported by the one and only multi-million-selling Sophie Ellis-Bextor who will be releasing her new album The Song Diaries in January 2019.

Nocturne Live will return to you between June 20th and June 23th. The place has a capacity for 9500 people and since first held in 2015 featured amazing artists such as Gary Barlow, Nile Rodgers, Noel Gallagher, Elvis Costello, Elton John, Jamie Cullum, Gregory Porter, Van Morrison, Ennio Morricone, The Corrs and The Jacksons.

Ciro Romano, founder of Nocturne Live stated: “We jumped at the chance to book Kylie for Nocturne Live. She’s an incredible performer with an unbelievable back catalogue to draw upon and her live shows are always spectacular. We’re thrilled to have confirmed her for the closing night of next year’s series and look forward to more exciting announcements over the coming months.”

The additional artists for the event will be announced over the upcoming months. But I can promise you one thing: you won’t be disappointed. So jump on the chance to get a ticket for next year’s Nocturne Live. It will be huge!!! Get your tickets here.