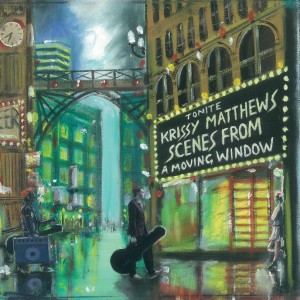 One of my most prized possessions is an electronic copy of an album produced in 1936; the recording is drawn directly from vinyl and is steeped in history. I’m talking about Robert Johnson’s, Cross Road Blues and all guitar-based music can trace its ancestry back to delta blues.

Now, musical has evolved, morphed and change beyond recognitions since Robert Johnson’s day but their are some that still have their roots firmly ensconced in the blues and a prime example of this is Krissy Matthews.

The opening track ‘Time Machine’ with its opening metallic twang guitar and softly spoken opening lyrics seems to sit well in the past right until the song steps up a gear, then it takes on a whole new sound more akin to modern American rock but this mash up doesn’t disgrace the genre rather add another dimension to its rich heritage. The lyrics reference some of the great rock event of the past and a longing to be back in the tick of it.

This album is quintessential blues and each track will no doubt draw reference to the great and good guitarists. From the finger shredding solo on ‘I’ve been searching’ to the piano opening of ‘It ain’t worth it’ that imbues such a Southern Delta sound you can almost smell the Bourbon and cigar smoke.

With 12 tracks on the album, there is a lot to get through but the listener is treated to subtle variations of sound from the poignant ‘Day by Day’ and ‘Heading South’ to the honkey tonk of ‘Roadsick Blues’.

For me the stand out track off the album is ‘Day by Day’, it starts slow and builds but not to a crescendo rather an emotional piano infused track that leaves the listener deep in contemplation.

The comparisons (of which I’m guilty as charged) to Krissy Matthews playing will come thick and fast but for me, the closest comparison is Joe Bonamassa and not for the reasons you think. Yes, the sound is similar but it’s the attitude, the last time I saw Joe, he walked out to Maiden’s ‘2 minutes to midnight’ and it’s this ability to draw form numerous sounds that exemplify the comparison.

I can’t confirm that this album will achieve the personal admiration that Mr Johnson has achieved in my psyche but right now this album is pushing all the right buttons.

I strongly recommend that you catch Krissy Matthews this month before he jets off to the continent.