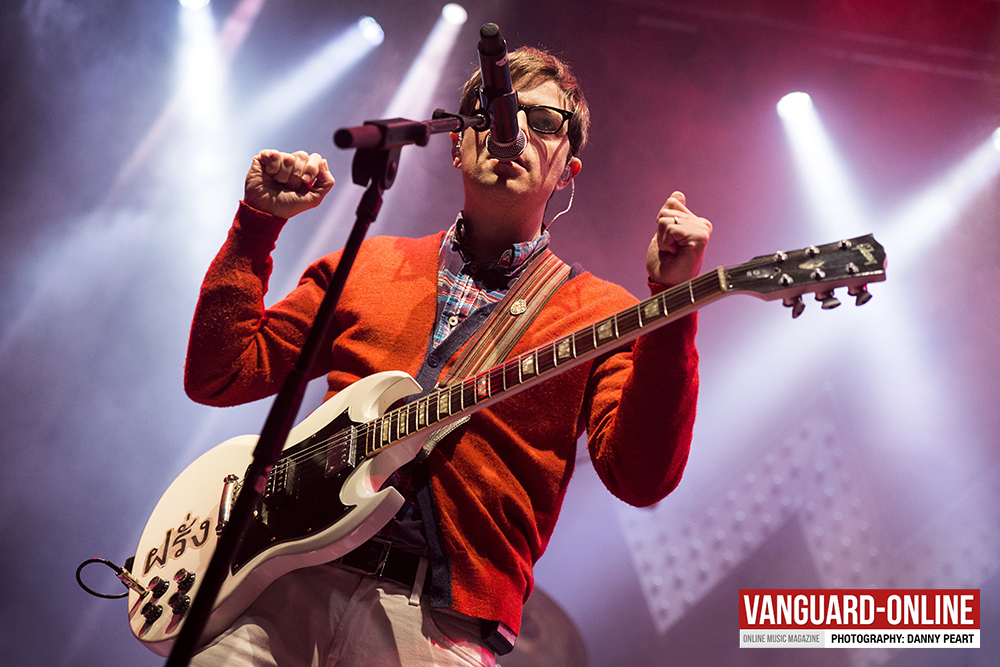 It may be a Monday, but it’s not your average Monday. Weezer are in town, and armed with a back catalogue of power pop rock sing-alongs, the Leeds crowd were sure to snap up their tickets fast as the show sold in the blink of an eye. The lucky fans turn up with plenty of time to get the drinks flowing, as support act The Orwells (7) perfectly kick off the show to get the crowd dried off and warmed up with their punk rock! frontman Mario Cuomo is as mad as a bag of weasels, and with such a personality on stage he doesn’t struggle to keep the crowd entertained throughout their short set. With tracks such as ‘Who Needs You’, The Orwells are more than equipped to handle opening up for the brilliant Weezer. 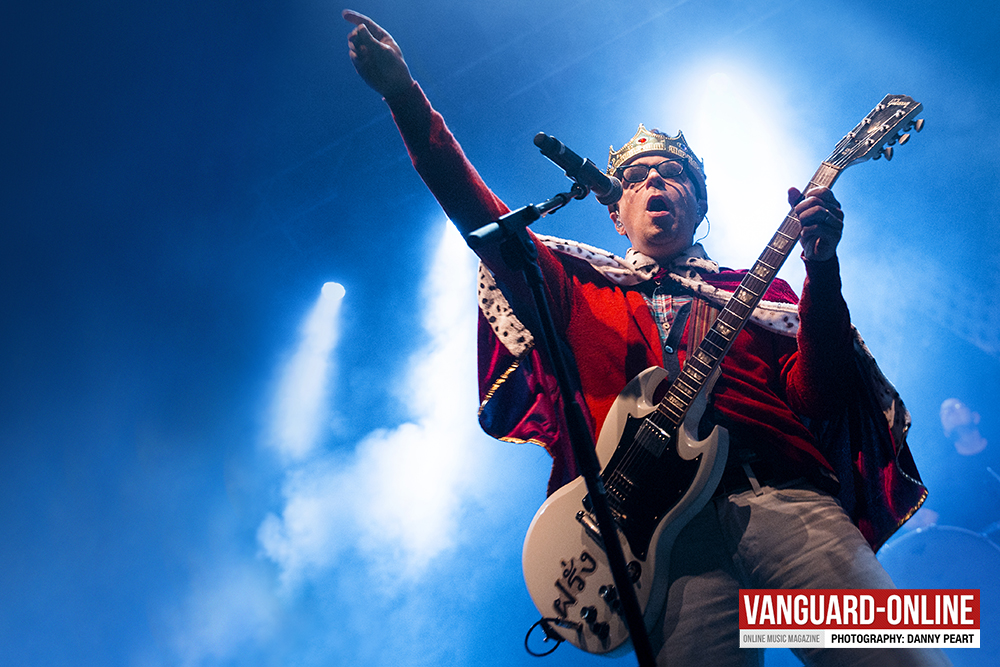 After a lengthy delay, the king of pop rock quite literally takes to the stage with a crown and robe. Weezer (9) open the show with ‘King Of The World’ and ‘California Kids’ to get the night rolling with plenty of momentum. The last time I caught Weezer in Leeds was back at Leeds Festival in 2010, and since then the band have released a selection of great albums in there own right, however this evening it’s more about the excitement of hearing some of their brand new material from forthcoming album ‘Pacific Daydream’. ‘Weekend Woman’ and ‘Feels Like Summer’ are Weezer back at their very best. Catchy as hell and full of cheery upbeat riffs the tracks go down a treat live and are already clear new favourite with fans both new and old alike.

Speaking of old, Weezer are not a band to deprive their fans of some of their best material from back in the day. ‘No One Else’ returns to the setlist after a couple of years absence, and as usual ‘Say It Ain’t So’, ‘El Scorcho’ and ‘Island in the Sun’ have us all singing along as the nostalgia floods back track by track through a crammed setlist. Of course it wouldn’t be a Weezer show without a little bit of randomness, and a couple of covers in the form of ‘I Took A Pill in Ibiza’ and ‘Hey Ya’, featuring a rather well worked breakdown for some ladies and gentlemen participation encouraged by Rivers Cuomo himself. 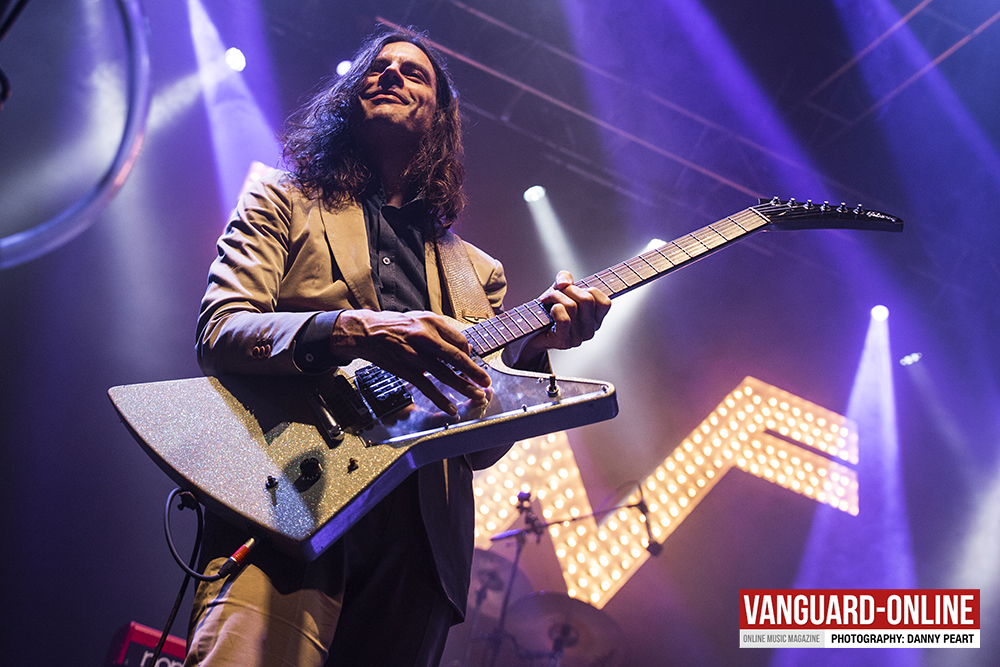 As you would expect, fan favourites ‘Pork and Beans’, ‘Hash Pipe’, and ‘Beverly Hills’ kick up the biggest fuss on the night. It’s solid proof that it’s everything the crowd want to hear as voices rise through the roof, leading us to believe it may have been one of the loudest shows Leeds Academy has seen for a while.

Rivers and the lads throw one more track our way in the form of ‘Buddy Holly’ to close out a fantastic shift, with an incredible amount of red and white confetti falling from the sky as the Weezer wings glow on stage behind the band applauding a much appreciated Leeds crowd once again. Even after 25 years of touring and rocking away Weezer still haven’t lost it, and with their new album due out in a week or so, they don’t look to be disappearing any time soon. 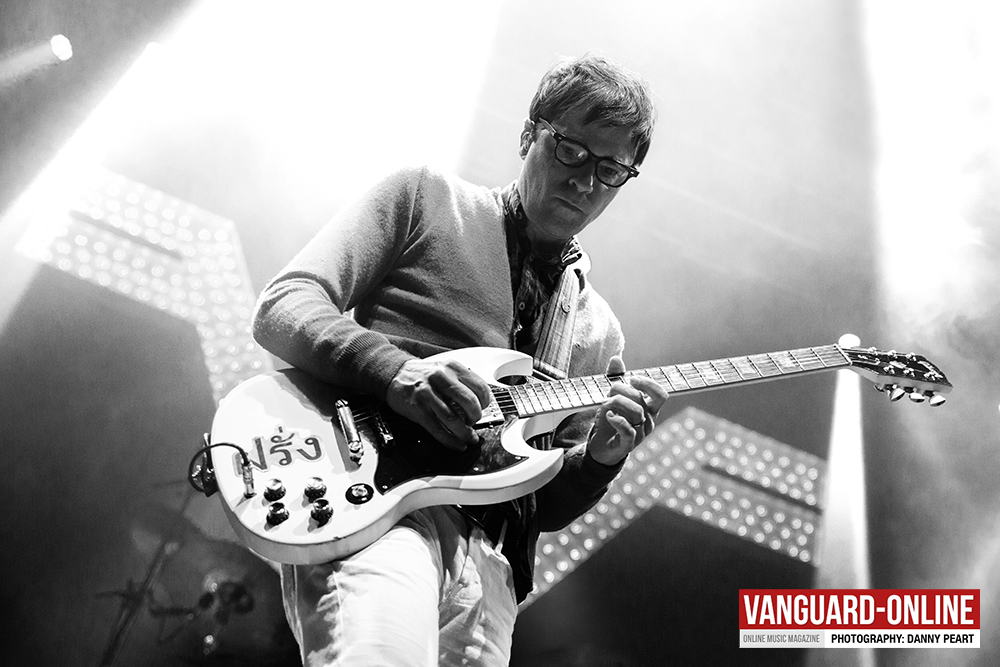