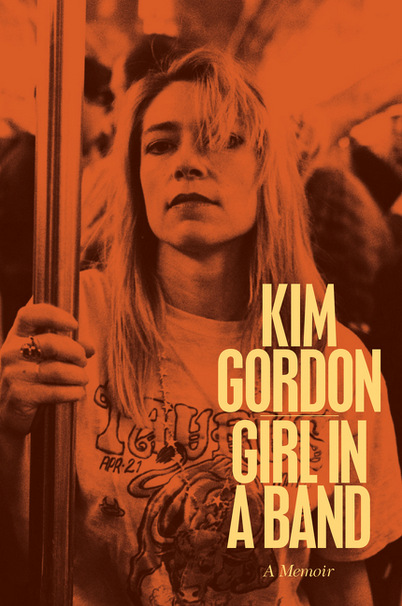 Kim Gordon’s “Girl In A Band: A Memoir” reads like Ms. Gordon herself is narrating it. The tone is calm and in control with only the occasional flash of emotion, such as when she is discussing her now ex-husband Thurston Moore. It will no doubt delight fans as well as give insight into this iconic figure.

Sonic Youth is just a part of Gordon’s life but probably what she is best known for to date. Fans will not be disappointed by her recollection of Sonic Youth’s work and in fact might want more details on some albums. She reminds us, sometimes ad nauseum–especially with her art credentials, how she is an accomplished creative type, mother and sister. Reading about how the only immediate surviving family she has is a mentally ill brother living in sheltered accommodation is difficult to reconcile with her image of artistic credibility and ice princess demeanour but remember she also did the school run when her daughter was younger. She recounts a school gate tale of exchanging pleasantries with another parent whose plans for the day involved the gym. What did Ms. Gordon have planned but an interview with Yoko Ono! Even on the school run she is cooler than you.

I always liked Gordon’s quiet and unassuming approach to her work, which is why this book is a surprise. She just never struck me as someone who would write so much about herself, including the really personal, such as the rather public breakdown of her marriage. I don’t think it is a coincidence she waited until her daughter was at university before releasing this because she seems like the type of person who would take a measured approach to her memoirs. Not only to be fair to her memories but those at the centre of them. Beneath her cool exterior is a person who feels it all and she isn’t ashamed to tell you about this. All of this benefits the reader because it never is sensationalist but never seems to skimp too much either. She certainly doesn’t hold back in her views regarding Courtney Love and her now ex-husband. This is a very hard balance to strike, especially considering the self-indulgent nature of vanity projects, like rock star autobiographies. Kim Gordon lives her life like a true artist: loud, examined and in line with her moral centre; this book is written in this spirit. The only fault I have is she doesn’t seem to get angry enough at times and was maybe just a little too grounded. It lacks the tales of punk rock craziness of Viv Albertine’s “Clothes Clothes Clothes Music Music Music Boys Boys Boys” and the emotional evisceration one feels when reading Bob Mould’s “See A Little Light” but is an enjoyable read nonetheless.

See more on the book here