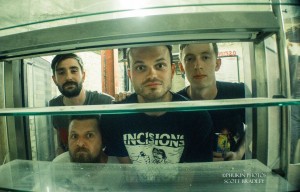 Manchester has always been a hub of great musical talent, and now more than ever, the underground rock scene is full to bursting with exciting, as-yet-undiscovered artists. One such band is gut-punching punk quartet Incisions, who recently released their third EP ‘Quit Now’ through local independent punk rock label Horn and Hoof Records. A blistering whirlwind of energetic punk melodies, grinding basslines and thundering drums, Incisions have a sound that is guaranteed to make you want to leap straight into the mosh pit, and, with lyrics fuelled by anger at the current state of the world as well as the frustration of dealing with their own inner demons, the band have created a record that is as wholly universal as it is deeply personal.

Opening the EP with unprecedented ferocity is ‘Chops’, which opens with a maelstrom of screaming guitars and pounding drums hailing a war on your eardrums, combined with frontman Jordan’s knife sharp, angst filled vocals to exert a punchy, kick you in-the-teeth attitude that radiates from every note! While the second verse may be less fiery and intense, with some grunge tinged elements woven into this cocktail of sound, the lyrics never let that pure punk energy die, with lines such as ‘everyone can fuck right off I’m living for myself’, which are about as punk rock of a sentiment as you can get! This is a track that ignites a blistering bushfire in your gut, and is guaranteed to fire up any mosh pit into a reckless frenzy!

‘Dead Inside’, in contrast to what one may expect from its emo-esque title, is a song made for those whose teenage days of wallowing in their sadness are far behind them! Its morose lyrical content is buoyed along by a relentless driving guitar melody and grinding bass, and the low, axe-grinding vocals come tinged with that rebellious punch distinctive of the ‘oi’ and skate punk genre. Make no mistake however: this band has a fierce energy that has no qualms about punching those OPM-lookalikes square in the mouth! ‘Mexican Jail’ follows; a track that lays a little dormant until the introduction of the chanting that hails the chorus, which is custom-built for stirring up a crowd into a sense of wild abandon! From there it is a rollercoaster ride of ear piercing screams bubbling over with palpable anger and fierce defiance, with the extended eponymous metaphor creating images of being trapped in a cage of suppression that each listener can adapt and interpret in relation to their own life and struggles.

Where the imagery in ‘Mexican Jail’ can be intensely personalised, ‘Fuck the Government’ is an expression of a far more universal sentiment that already endears this track to much of the youth of today! Opening with a comical exchange between ‘the boss’ and ‘the worker’ that you can’t help but laugh and cheer along to in true rebellious punk spirit, the band then crash into a positive cacophony of sound, overlaid with lyrics that tackle issues from the lack of moral code needed by those enlisted to the military to the distaste many feel for our current Prime Minister, Theresa May: and tackle is the right word, because the energy and passion with which the band spit out their defiant claims of freedom and denounce state control of their lives shows that they are a group coming out of the shadows with fists swinging! And with the addition of the violent call and response refrain ‘fuck the government’, it seems they created the perfect anthem to be their soundtrack as they do so!

The extended metaphor that runs through the following track ‘Island’ makes it a stark contrast to the uncompromising simplicity of the previous track’s lyrics, weaving a deeply layered image of the isolation felt by those who find it hard to speak up about the struggles they’re facing, illustrating perfectly my own long-held belief that punk can be as reflective as it is rebellious, as sometimes the greatest injustices we must protest against are the ones we do to ourselves. However, just in case you were worried this EP was flagging in energy towards the end with all this deep, emotional talk, never fear, for this track, though more melodic than some of its predecessors, still carries Incisions’ characteristic energy in its chugging bassline and pummelling guitars! Closing the EP is ‘Sexy Velvet Ghoul’, all geared up to be one last hurrah as the guitars rip through the opening sultry, grumbling bassline, and carrying the EP to its tumultuous conclusion.

After all that energy has dissipated into the cold evening air, over the ringing in your ears you might just catch the sinister, deep-throated laugh that closes this cutthroat blaze of a record that is bursting with raucous punk energy from every fibre, every screaming note. In this age where frustration, anger and fear is paramount, particularly among young people whose futures are now more uncertain than they have ever been, the importance of the powerful voice as well as the feeling of catharsis provided by records like this cannot be overstated. Incisions have created a noisy, energetic rallying cry with this EP, one that could see them become a beacon for a new revolution heralded by this new generation. 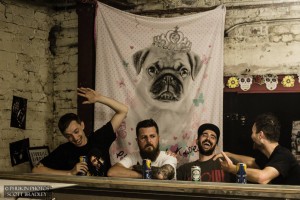 ‘Quit Now’ is out now via Horn and Hoof Records. Incisions are set to support Consumed on August 12th in Liverpool as well as playing the Flair Witch Project in Oldham.

All photos courtesy of Phukin Photos by Scott Bradley – https://www.facebook.com/PhukinPhotos/