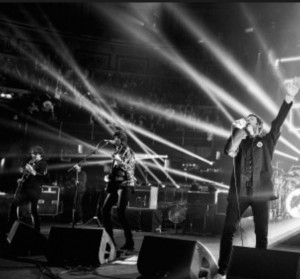 It seems unnecessary to even give any detail on who Kasabian are and background information as I expect everyone knows who they are, right? If you don’t – Have you been living under a rock for the past 20 years? They last released material in April of 2014, with the single ‘Eez-Eh’ which was to promote the debut album ’48:13′ which came out a couple of months later.

I travelled to Bridlington yesterday to watch them perform with support act Blossoms. The Leicester rock band recently announced a handful of shows including a massive show at Leicester City’s football ground following their recent success in winning the league.

Firstly, Blossoms. I feel there is still so much to see from this band, but they are obviously already doing well if they are supporting a band like Kasabian. They without a doubt got the crowd ready and rearing to go. You know when you attend a gig and the support act end up being better than the actual band you paid to see? Well, in this case I wouldn’t say they were better, but they did put on an exceptional performance. So they were close-ish. I was already aware of Blossoms before seeing them support Kasabian but if you have yet to listen to them – give them a try. You won’t regret it.

Kasabian kicked the show off with ‘Underdog’. The energy from all of the band members was definitely rubbed off onto the crowd. Especially Sergio Pizzorno with his unusual dance moves and his famous fox tail attached to his rear. Again with Leicester city or the ‘foxes’ as they call themselves. The lighting effects appeared to be a huge part of the show, not really any special effects like smoke and confetti, just lighting. Mainly red, of course. And it worked. It just goes to show that a band like Kasabian don’t need massive special effects, no films playing in the background, no patterns or shapes across the stage just a bit of lighting and all their energy. And I am completely satisfied, I feel it was worth every penny.

My favourite part of the night was when introducing ‘Where Did All the Love Go?’, lead singer Tom Meighan dedicated the track to everyone who was at the Bataclan theatre during the Paris Attacks last year. 89 were killed during a sold out Eagles of Death Metal concert. He stated that he ‘loved them’, which set a nice atmosphere.

Kasabian are known for their covers during live shows. Last night Pizzorno did a solo, acoustic cover of the Fugees’ ‘Ready or Not’. The crowd of course sang a long, to which it then went into ‘Club Foot’ which was a nice touch. They also played their popular cover of Fatboy Slim’s ‘Praise You’ towards the end of the show.

Of course you’re wondering when ‘Fire’ was played right? As it is their biggest hit. It was the last song that they played, and what a way to end. I’ve been to many gigs but never have I seen a crowd jump as much as they did to this particular track. It’s even more shocking because I think I was pretty much one of the youngest people there (I’m only 20). I even saw a couple who were definitely in their 70s really going for it. It was an amazing atmosphere and a great high to end on.

The band will be playing at Leicester City’s football ground King Power Stadium on the 28th of this month with special guests Blossoms and Slaves.

‘Where Did All the Love Go?’

‘Ready or Not’ (Fugees cover)