No one can dispute the energy that front man Wilson delivers to each and every show, it’s somewhat mesmerising. Fans hang on his every movement, whether it be high on stage rigging, swinging from the stage on a rope or singing on the sound desk. Wilson’s wild antics sometimes distracted from the large electronic stage screens showcasing ‘Kaiser TV’, which was worth watching on its own, especially to see the image of Wilson hoovering, in a dress. 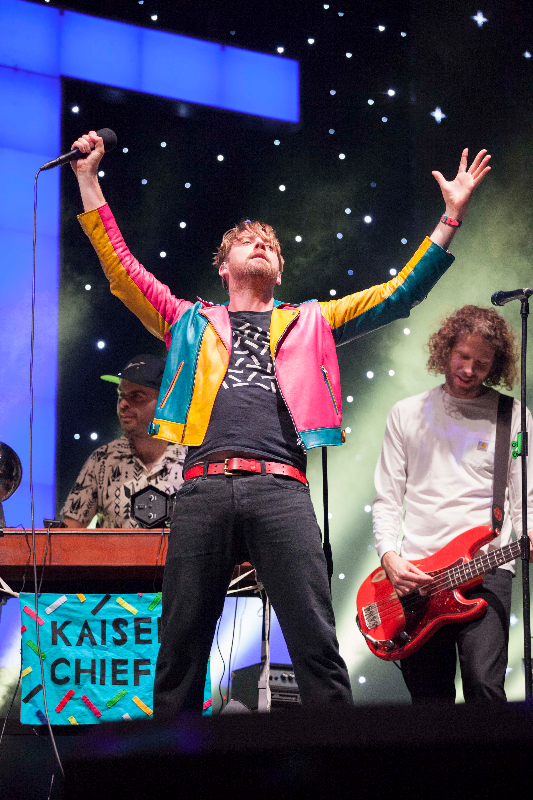 This was the final show for this Leeds based band on their Stay Together tour. The home coming gig to the Leeds First Direct arena was always going to be something special. 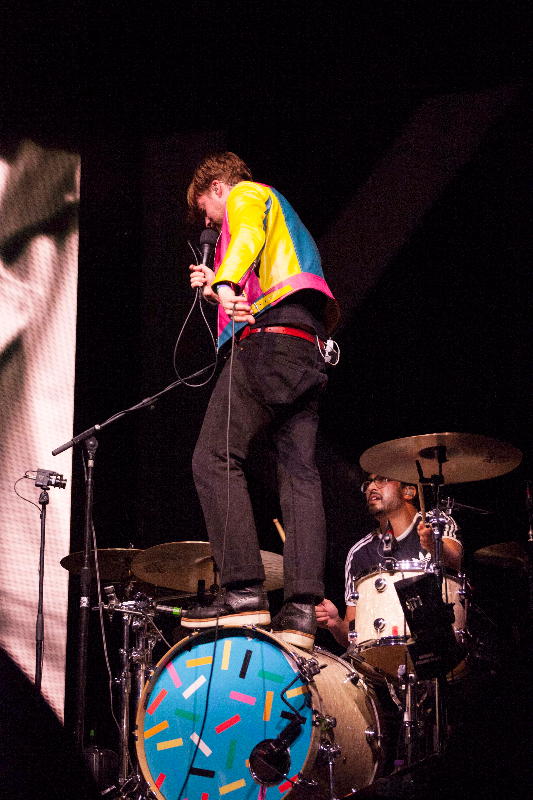 Kicking off the show with ‘We stay together’ from behind a black curtain which, after a technical hitch, fell to the ground revealing the band on a stage within a stage probably the similar size to which the band started playing on in Leeds back in 2003. 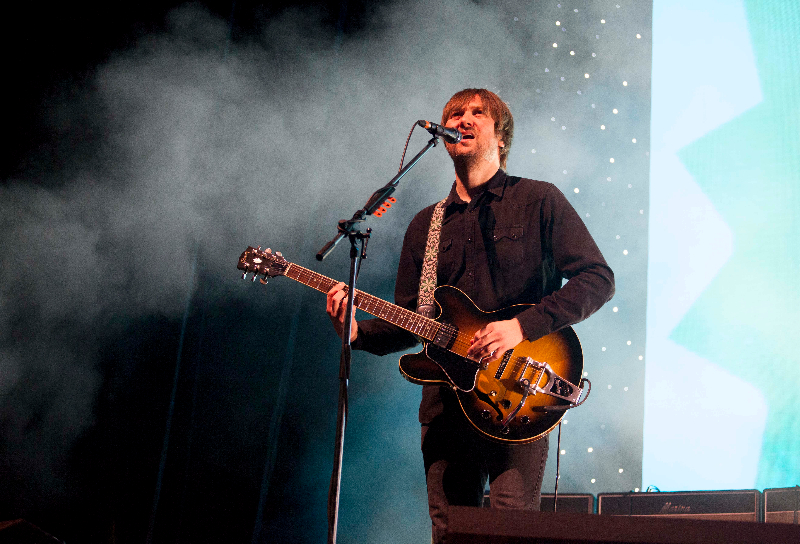 The new, tamer, more pop sound from the sixth studio album ‘Stay Together’ fit comfortably alongside the classic anthems. Parachute, the first single from the album, Hole in My Soul, Good Clean fun (not yet released) are much better heard live than from the album. They are the kind of songs that grow on you and may be in time the kind of anthem that the Kaiser Chiefs have previously been know for. Some of the seated crowd were a little unsure of the new songs, maybe they didn’t know them or didn’t like them-but by the chorus’ most were on their feet dancing, which was actively encouraged by Wilson- not so much by the arena staff.

Known for endless crowd participation, Ricky Wilson took hold of a mobile phone from the crowd to take selfies and video the band on from on stage after a stunning performance of Ruby- which is always a hit with any age crowd. Keyboardist Nick ‘Peanut’ Baines was brought out to the front of the stage to start the obligatory clap of Modern Way before changing once again to one of the two keyboards he uses on stage. 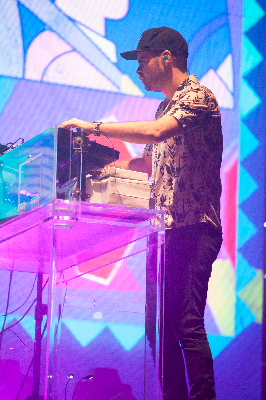 Always eager to please those at the back of any venue, Wilson jumps from the stage, vanishing into the crowd, reappearing at the back of the standing area on a small stage to perform ‘Meanwhile up in Heaven’ from 2014 album EEE&W under a shower of light from the overhead giant glitter ball. Heading back through the crowd once more while still trying to sing ‘Press Rewind’ stopping to dance with the audience while doing so. 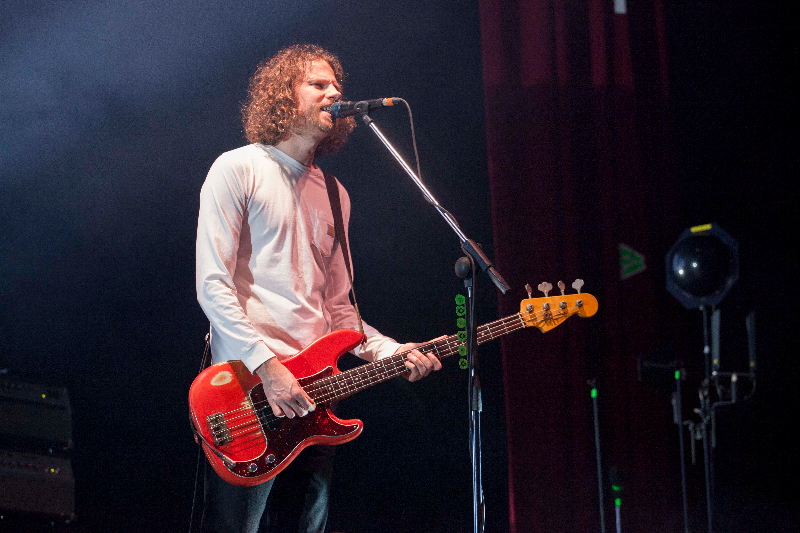 He continued to thank the fans for their support as “Being from Yorkshire, we are taught to say thank you”. He asked the crowd to repeat after him a solemn promise to ‘keep buying tickets, tell your friends and bring them to a show’ something I myself would actively encourage as this is a band that need to be seen as well as heard. 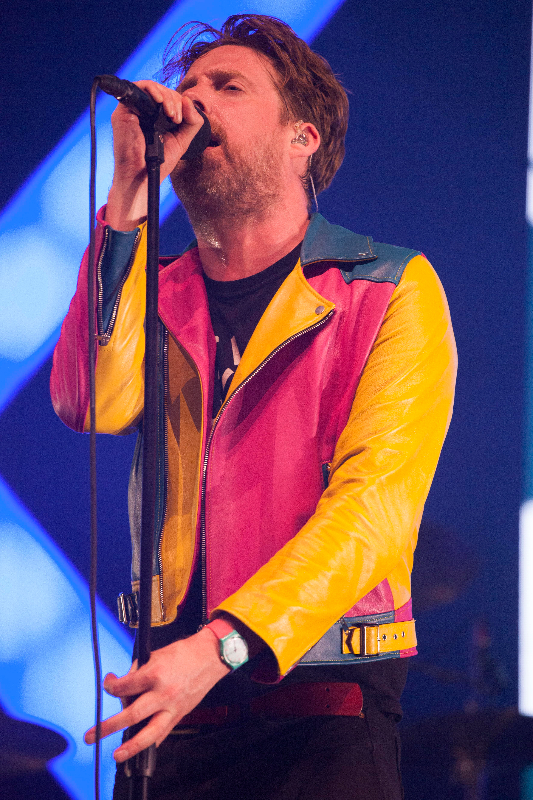 In quick succession, Never miss a Beat, Angry Mob and I predict a Riot blew the roof off the packed out Arena. While a few over enthusiastic revellers were removed from the arena, most were happy in the polite kind of moshing that happens at these gigs. 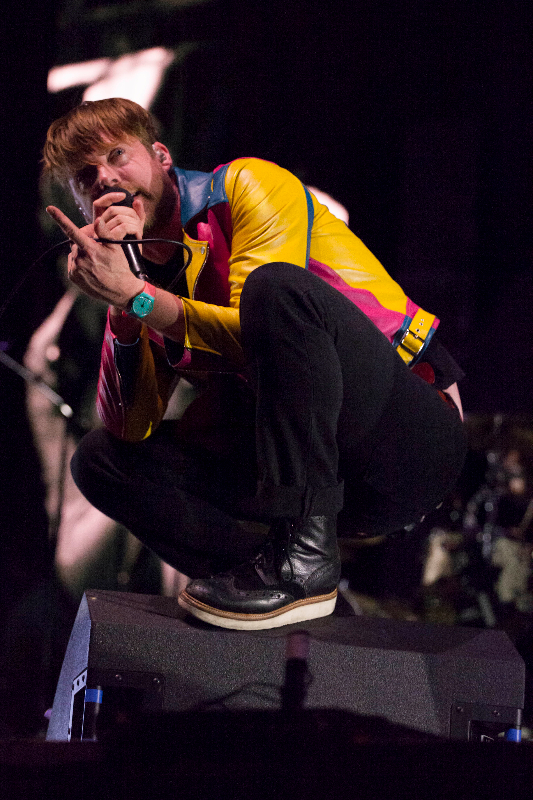 Coming Home, the first single from their previous album Education, Education, Education & War, is always bitter sweet at these shows. For most it means the night is coming to an end but disappointment is met with confetti canons showering the crowd and some pretty impressive CO2 cannons to boot. 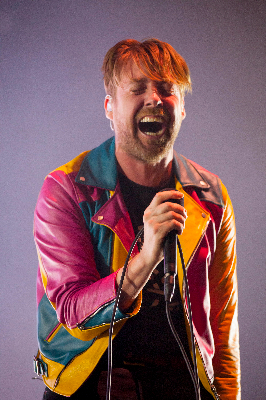 The encore of 3 songs started with Still Waiting, another track from the new album. Guitarist Andrew ‘Whitey’ White helped Ricky Wilson get back on track after issues with his earpiece left him out of time. The cover of ‘Ever fallen in Love’ by the Buzzcocks got the crowd jumping again ready to finish the night on high tempo track Oh My God. The crowd went wild as once again the CO2 cannons blasted from the stage and a rope drops from above which Wilson climbs and swings out above the front rows of the the crowd as the final date of their arena tour drew to a close. 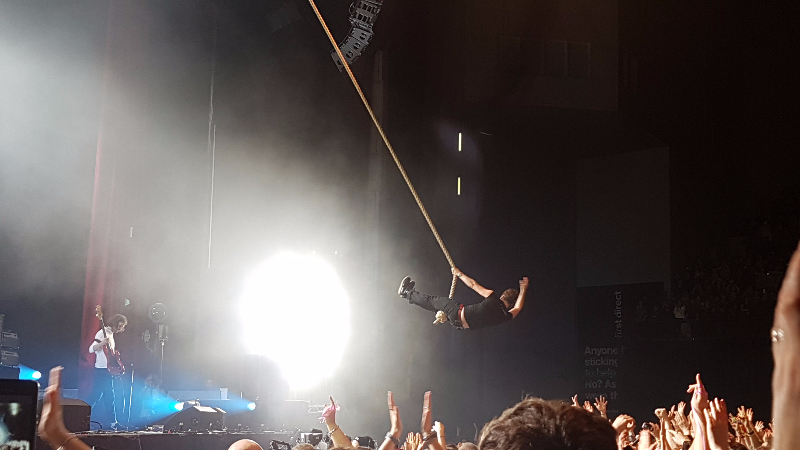 You may not be able to get over the change in the new sound from the Kaiser Chiefs, but I would recommend anyone to get down and see these guys live. Wilson’s ability to make you feel every lyric he sings is not something to be missed.

Pictures and review by Angela Smith