It’s a long way from the huge spectacle of Bellowhead to a solo show and when I see the stage set with speaker horns, something like hanging chime bars and what appears to be a metal version of the Angel Of The North hung about with violins, I wonder if we are about to get a Tom Waits style junkyard bashing. We aren’t – the set is the result of Jon Boden’s sense of showmanship and encloses his working area and tools – a few guitars, a fiddle, a squeeze box and an electronic mat. From this he produces a surprisingly full sound and involving set. With feet playing the kick drum on his mat and triggering drone sounds, it’s a proper one man band. 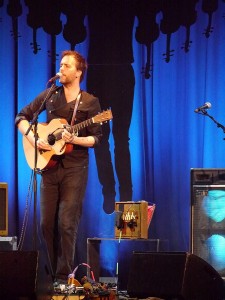 With a stack of material to draw on, the evening was never likely to be dull – there’s his post-apocalyptic folk opera, love songs, Bellowhead material and the huge repertoire from his year-long Folk Song A Day project. So opening with the traditional Rigs Of The Times was no disappointment – detailing the rip-offs of the time brought a previous century into parallel with this. Equally, a song about deportation had the sense of injustice so many of us feel today. He is a substantial presence – confident and tall, chatting confidently and wittily about the songs. His tale of touring and a breakdown on a late night empty motorway is better than the rather naff song from Songs From The Floodplain. Songs like Blue Dress or Painted Lady from the eponymous album are far stronger; his love songs are melancholy and lovely. Laconic chat interweaves as sardonic comments on Europe and apocalypse follow the Brexit shambles and election of Trump in the US and bring us to the traditional story-song, Rose In June, preceded by adroit tips on getting the best from a long ballad. 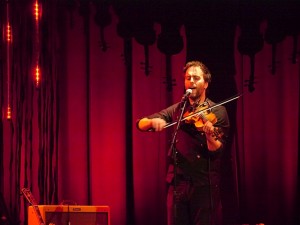 The style is declamatory but delicate too; he’s a great balladeer and tale-teller. His dramatic voice uses all its registers in the service of the song. He plays tricks with his skill, adding gravitas to a light-hearted Music Hall song, Old Brown’s Daughter. He then pushes it too far with I Want To Dance With Somebody in waltz-time, claiming a darkness to the lyric never apparent when Whitney did it. There are a few instrumentals and it is something to see how involving one man can be with one instrument and a stomp box. An acapella traditional tune is accompanied by feet, handclaps and flashing red neon. 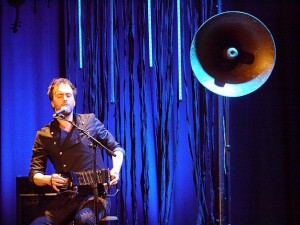 A carefully planned evening, yet with a personal touch, Boden is a commanding performer and one of the few who can make music centuries old feel immediate and personal. All the better in the grand surrounding of Saltaire’s Victoria Hall with local beers and a hands-on promoter. 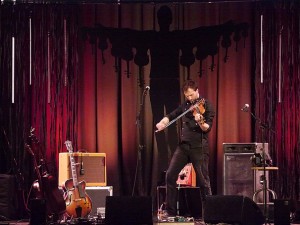